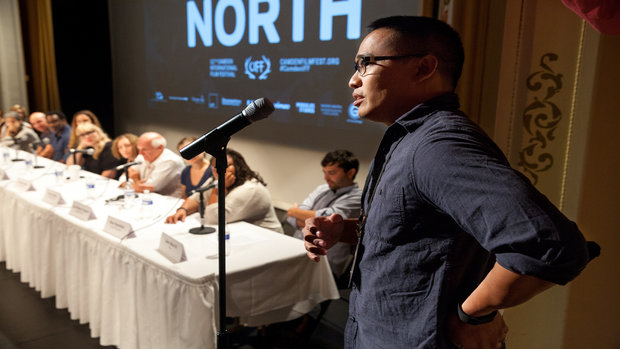 The six projects selected for the Points North Fellowship will receive two All Access passes to the festival, five nights of accommodations and a round-trip flight to Maine.

The Fellowship takes place before, during and even after the festival. Before the festival, filmmakers receive two days of intensive training and mentorship, sponsored by the Maine Media Workshops. Then, filmmakers go on to pitch their projects to an array of international funders, broadcasters, distributors and producers — all before a live audience.

Following the Festival and Forum, Points North Fellows will receive a ticket to the Cinema Eye Honors, held in mid-January in New York City, an invitation to CIFF’s annual Cinema Eye Honors Nominees Party, a day of one-on-one meetings with several leading industry representatives and two nights of accommodations in New York.

All participating filmmakers will be eligible to win the Points North Pitch Award, which includes 60 hours of free sound mix or color correction services from Boston-based Modulus Studios worth approximately $10,000.

Points North alumni include: Greywater, Whose Streets, The Reagan Years, In Country, Mateo, Leviathan, Betting the Farm, and two films which will premiere later this month at the Hot Docs International Film Festival, The Peacemaker and What Tomorrow Brings.

Submissions for the Points North Fellowship are open through July 14, 2016.