Through a Glass Darkly: Men & Chicken 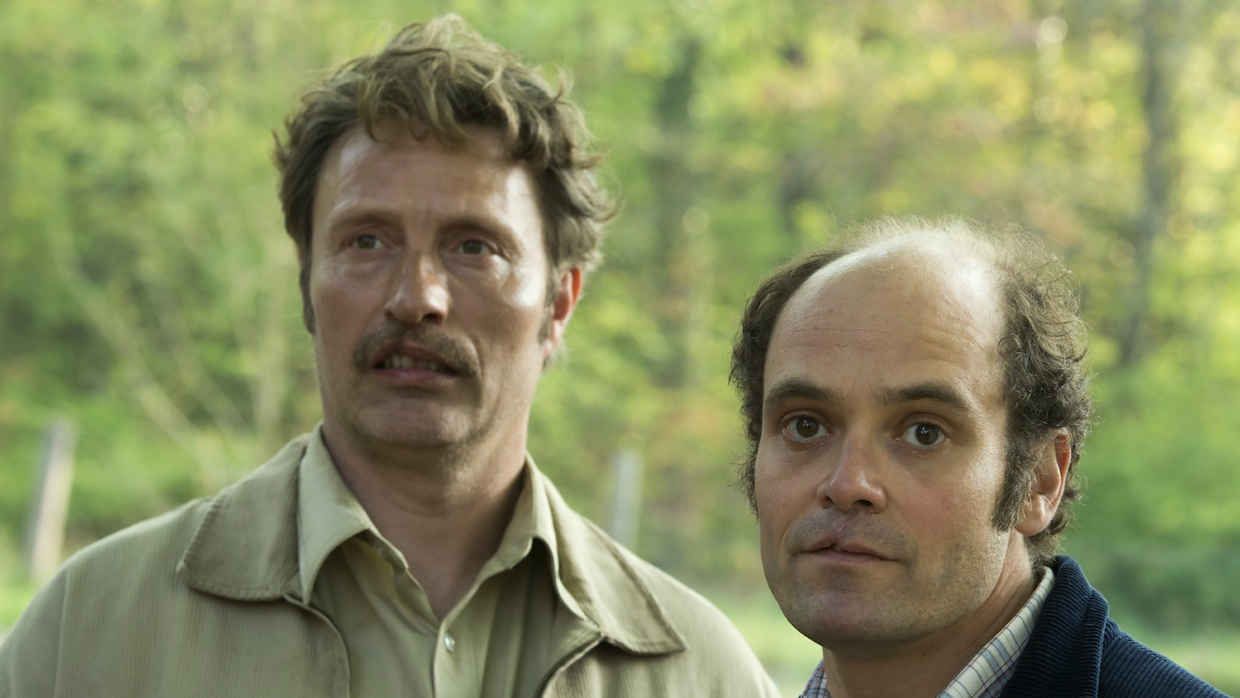 I really wanted to be a Jew, and then I found out that I was really a Nazi, because my family is German. And that also gave me some pleasure. So, I, what can I say? I understand Hitler….How do I get out of this sentence? Okay, I am a Nazi. As for the art, I’m for (Nazi architect Albert) Speer.

This is a mild example of the comments reported from the 2011 Cannes Film Festival by Jada Yuan in a May 18 Vulture article entitled “The 10 Most Controversial Things Lars Von Trier said at the Melancholia Press Conference.” After an attending journalist asked the Danish filmmaker if he would like to make a blockbuster, von Trier remained in character and stretched the analogy: “Yes. We Nazis like to do things on a big scale. Maybe I could do The Final Solution.”

The government of France, which, pretty much alone among nations, has strict laws banning remarks that can be construed as anti-Semitic — they seem necessary there — was not amused. A branch of the powerful Ministry of Culture, the festival declared the winner of the 2000 Palme d’Or persona non grata and banned him from coming within 100 meters of the Palais.

In an interview in the quaint garden of a small hotel in the swank seaside town of Mougins two days later, I asked the mellow (read: “depressed”) director about the international outcry stirred up by his typically provocative remarks. His response sheds light on the uniqueness and source of comedy in Denmark, and the danger posed when it is shared with outsiders.

I had thought, especially after I saw Bruno Ganz in that film about Hitler, that there is a little Hitler-like man inside of all of us. I was naive and stupid. If I had said it in Danish, it would have been much more nuanced. 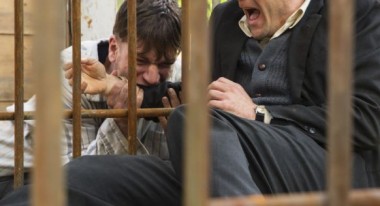 The linguistic component of Danish comedy, which by any standard rests on the dark side, reflects its relative harmlessness, general acceptance, and social utility. “If there is a dead body in Denmark, someone is going to make a joke about it,” says Anders Thomas Jensen in a piece by Emma Jones entitled “Scandinavian Noir” on the site bbc.com. Jensen’s filmography as writer/director includes such funny films as The Green Butchers, Flickering Lights, and Adam’s Apples, and, as screenwriter only, much of Suzanne Bier’s more sober work.

In the black comedy Men & Chicken, his most recent film, Jensen brings ethics to the fore. A major theme is the sanctity of life, no matter who or what embodies it. Although it has been a huge commercial success in its home country, and Jensen has an enormous following, audiences couldn’t get past the blatantly comic.

The penchant for dark humor is deeply ingrained in the Danish psyche. “We’re known for being dark and depressing,” Swedish producer Gudrun Guddys tells Laura Turner Harrison in “Klovn Your Enthusiasm: The Many Layers of Discomfort in Danish Humor,” an article that appeared on Splitsider.com. “I suppose our comedy can be seen like that, too.” There, sarcasm and irony occupy special places.

In fact, gallows humor is so intrinsic to the Danish — indeed the entire Scandinavian — worldview, that it smoothly fits into, and flows from, their movies. They lack that forced feeling we often see in, say, the more juvenile (as opposed to adults acting juvenile) Hollywood films. According to Turner Harrison, “(The Danes) respect the sanctity of free speech and are comfortable letting their humor guide them to all sorts of disturbing places…” 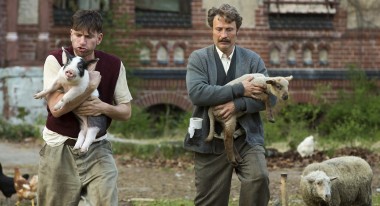 Take the original title of Men & Chicken, Maend og Hons, which translates literally into Men and Hens, the latter insulting slang for women. This, in a country lauded for its progressive politics and enlightened social attitudes. In the U.S., some might cry “Fowl!” — sorry, “Foul!” — for such non-P.C. terminology, which would be considered salt in a wound, especially in a film focused almost totally on males. In Denmark, however, it’s a non-issue, just skewed humor. In Cannes, von Trier was relaxed ad libbing in English about Jews, Nazis, and Germany, as if he were back home, speaking his native language without filters, without censoring himself. He had forgotten to pack nuance.

Think about the international response 11 years ago, when the “Jyllands-Posten” published illustrations by 12 Danish political cartoonists merely suggesting the face of the prophet Muhammed — a no-no in Islam. Remember the fatwas and assassination attempts?

Men & Chicken does have some exceptionally choreographed scenes of slapstick and farce, styles of cinematic humor more universal than the distinctively dark Danish variety. The Three Stooges and the Keystone Cops are such obvious models that they border on homage. And a credibly unglamorous Mads Mikkelsen, who is internationally recognized for his more dramatic roles as a villain or matinee idol, surprises with an uncanny sense of comic timing worthy of a circus acrobat. 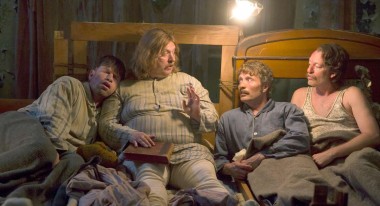 Yet the inappropriate, irreverent jokes and actions, which elevate bad taste to an aesthetic more polished than anything by John Waters, set the tone and steal the show. “Do all wheelchair users interrupt this much?” Mikkelsen’s Elias tactlessly asks a paraplegic female psychotherapist over dinner in a fine restaurant. “Mother died cause Dad liked to perform fatal caesarians,” one of his half-brothers explains in a twisted, cynical take on parenthood. Elias masturbates so compulsively that he carries a roll of toilet paper all over the decayed sanatorium on the small island of Ork — its startling decrepit detail by production designer Mia Stensgaard effectively highlighted by ace DP Sebastian Blenkov — in which his three half-brothers and their sequestered 99-year-old father reside.

A disgraced geneticist who experimented with hybrids, crossing different species and using his own stem cells trying to attain his goal, he “broke the species barrier!” brags proud Gabriel (David Dencik). He is a rational academic half-brother raised with Elias in an urban setting far from Ork. Gabriel and Elias knew nothing about their biological father on the island until their adoptive dad informed them in a video after his death.

The dark humor is sometimes self-deprecating. “I struggle with the fact that I’m anatomically challenged,” confides heavy-set middle brother Josef (Nicolas Bro), who, like the clumsy youngest, Gregor (musician Nikolaj Lie Kaas), yearns for girls to replace the chickens that run wild all over the sanatorium that they shtup for release. The siblings’ pursuit becomes even blacker when shameless Elias takes his even more shameless kinfolk to a nursing home, where they chase the only two remaining women, both flirtatious and willing geriatrics, one of whom proudly brandishes a walker. (The population of the island is down to 41.) 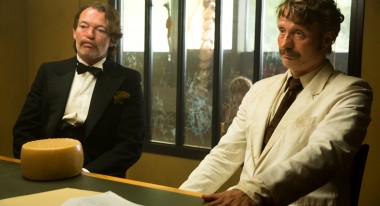 The oldest Orkian brother is bossy Franz (Soren Malling), prissy but rough, who is usually clad in a robe, and who gets his jollies smacking the others with either a stuffed animal (beaver, mute swan, owl, take your pick) or a large, antiquated kitchen item. Violence is clearly the principal form of communication in a family that redefines dysfunction. Franz’s other passion is an unhealthy attachment to…cheese.

His siblings are helping him regain the job as kindergarten teacher from which he had been fired years before for behavior that was considered tasteless. Tasteless? Probably best not to think too much about it.

Evidence of a blood relationship among the five men are uniform cleft palates and smushed-up noses—and, perhaps imprinted on their genes, a knack for playing doubles on the badminton court. The mental analog of their physical oddness is a dearth of logic. I’m not sure if it is also in their DNA or, in the case of the three Orkians, a function of malnurture, but reason is not inscribed in their consciousness. (Gabriel is the most normal of all.)

Elias not only mixes metaphors, he invents nonsensical ones in a futile bid to validate absurd arguments. The fact that every child in Mexico City does not wear a pancho is irrelevant ammo for a debate about an unrelated issue. Back-up for his assertion that Ork’s mayor lacks leadership qualities? He let his daughter eat eight cream-filled cakes.

Jensen’s approach to the irrational and illogical stems from astute observation of his countrymen and women. According to the Danish critic and TV personality Soren Hoy, he is good at elucidating

the logic you see and hear from undereducated people from the provinces. It’s like when Texans are right, but the way they are right is wrong. Typically, people with that logic make their own conclusions based on some kind of self-developed theory, rarely based in reality, but still true in some way. In the States, you would hear it at the hairdresser’s or at the local store.

The narrative is itself as distorted as the characters. Deceptively complex, it is bookended by commentary whispered by two young boys. The style is that of an old fairy tale.

Within this framing device, the film takes a turn toward contemporary concerns. Its sociological spin — hybrids are as life-worthy as full-fledged human beings and members of other species — parallels such current events as the conflict in Denmark between immigrants and more landed folk, as well as that between migrants from the Middle and Near East and Danes born in the country or thoroughly assimilated.

Chimeras become in Jensen’s brilliantly imaginative creation more than temporary or permanent guests. They deserve the enlightened egalitarian treatment for which the country is known. In the Danish social order, no one is weird, or all are equally so.