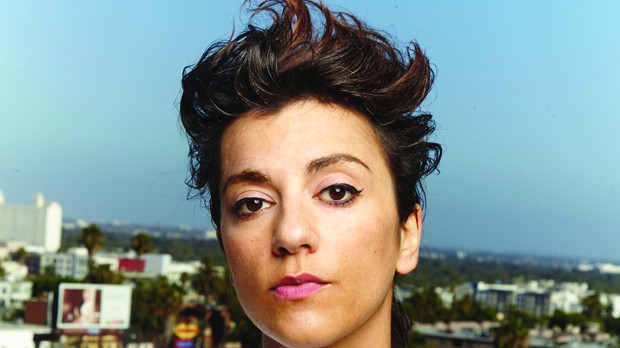 “Making a film is like putting on a perfume — you see who it attracts,” says Los Angeles-based writer/director Ana Lily Amirpour, whose “Iranian vampire spaghetti western” A Girl Walks Home Alone at Night has been amassing passionate devotees since its premiere at Sundance this year. “I make films to make friends,” Amirpour continues. “It’s just me, lonely, trying to figure out how to be a human being. When making a film, something in your brain caves: you invite people in and those people are part of it for a while. And then you’re done, it’s over, and you have to do it all over again.”

A Girl Walks Home Alone at Night is an astonishing debut feature that contains the dark beauty of old-school vampire films, the cool rigor of the Iranian New Wave, and the culturally aware wit of someone with killer taste in music and movies. Indeed, during our conversation enthusiasms tumble excitedly from Amirpour’s lips: “I love James Dean, Die Antwoord, Michael Jackson, Madonna, the Bee Gees, Sergio Leone, David Lynch, Sophia Loren. I’m obsessed with this album Escape Yourself by Footprintz.” And Bruce Lee. “Read Striking Thoughts, his philosophies on life and art — they’re the most gangster-ish you’ll ever read. He’s all about obstacles being in the past.”

But don’t think this pop cultural facility makes Amirpour some kind of film nerd ironist; A Girl Walks Home Alone at Night is shot through with a politically aware sense of emotional isolation and an identifiable moral compass. Set in “Bad City” — Bakersfield, Calif., doubling for a lawless Iranian ghost town — the film follows its skateboard-riding, hijab-wearing vampire anti-hero (a riveting Sheila Vand), whose killer kiss combats misogyny and general boorishness until one potential victim proves to be more sensitive than the rest.

Born in England, Amirpour moved with her family to Miami when she was young. “I watched the making of Michael Jackson’s ‘Thriller’ video thousands of times,” she says. “It taught me how to be an American.” The family settled in Bakersfield, where Amirpour made shorts, like a slumber party slasher pic, on her dad’s Sony Sport Hi-8 camera. She went to college as a biology major but dropped out, snowboarding for a summer before going to art school in San Francisco and film school at University of California-Los Angeles. She signed early with Hollywood agents and managers, but it was while in Germany, making a short for the Berlinale Talent Campus, that she decided to stop playing the studio game. “I ended not making those [Hollywood] films, and I am so glad. They were not my pure soul matter. In Germany, I got to sit and think about the shit that I love. I thought, I’m going to write something where everything people say and do turns me on.” In less than a year she was through production. “I feel like you have to get your own ball rolling, fast and hard, until it’s this undeniable giant boulder rolling down the hill,” she says.

A Girl Walks Home Alone at Night recently was acquired by Kino Lorber, who will release it in collaboration with VICE. Next up is The Bad Batch, “a post-apocalyptic cannibal love story set in a Texas wasteland.” “A muscled cannibal breaks the rule ‘don’t play with your food,’” Amirpour says. “It’s Road Warrior meets Pretty in Pink with a dope soundtrack.” — S.M.