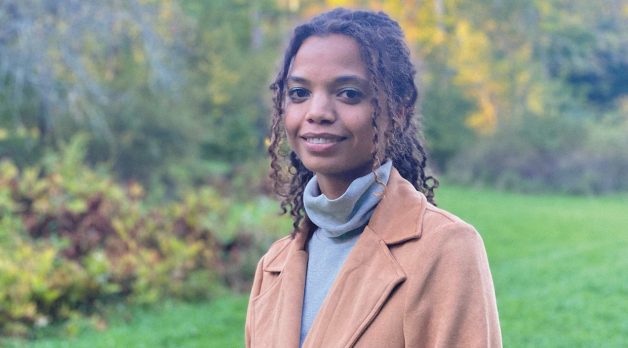 In Annalise Lockhart’s unsettling Inheritance, no matter what land you own, you can never escape the white gaze. Set in her parents’ Vermont cabin that she grew up visiting every summer, Lockhart’s short centers around Norra (Victoria A. Villier), a young Black woman granted the deed to her father’s land on her 25th birthday. After the deed is officially handed over during a celebratory dinner with Norra’s dad (Ron Brice) and brother (DeLeon Dallas), she notices a pair of glowing eyes peering out from beyond the trees of the forest. The following morning, Norra notices even more eyes, possessed by a pair of threatening, nonverbal zombie-like ghouls who stare back at her. Silent though they are, the apparitions (all Caucasian) have a clear motive: intimidation. When asked by her brother how their stares make her feel, Norra responds, “wrong.” “Maybe that’s what they want,” her brother concludes.

Growing up in Manhattan, Lockhart found herself involved in the arts from an early age. As a cello player, Lockhart rode the subway with her father, the late playwright Keith Lockhart, to numerous orchestral events each week. “My father attended the program at Yale and loved writing plays,” Lockhart reflects, “but he later got sucked into the world of advertising. However, he still woke up at 4 a.m., before work, to write. I think I received some of my own writing practices from him, and I’m super thankful knowing that you are the thing you practice on a daily basis. That’s been very foundational for me.”

Along with an appreciation for Singin’ in the Rain, Lockhart adored science fiction films like E.T. the Extra-Terrestrial and The Matrix. The latter, released when she was seven years old, also influenced Lockhart’s interest in Afrofuturism. Receiving a B.A. in English literature and creative writing from Stanford University, Lockhart cites texts by science fiction authors like Octavia Butler and Samuel R. Delany as her favorites. “Once I locked into [their work], I thought, ’My gosh, that is exactly what I need to be doing,’” Lockhart remembers.

Between her freshman and sophomore years of college, Lockhart’s first experience in film production was working as a production assistant on Daniel Patrick Carbone’s Hide Your Smiling Faces. After graduation, Lockhart briefly remained in the literary world, collaborating on a digital emotion map for Stanford’s Spatial History Project that created a data tier of London locations referenced in literary novels of the 18th and 19th centuries. The project was eventually published, but Lockhart craved less literary endeavors and more film work, eventually being hired as first A.D. on several films, including Anna Rose Holmer’s The Fits and Terence Nance’s series, Random Acts of Flyness.

Encouraged by the filmmakers she had been working with as an assistant director—including directors Nance, Holmer, and Mariama Diallo, as well as Fits producer Lisa Kjerulff—Lockhart was ready to take the next step. Hiring several of her previous on-set coworkers for her four-and-a-half-day shoot, Lockhart felt confident that their shared familiar shorthand would make production on Inheritance smooth, and the team shot the film in August of 2019.

One major plot device involves blue tubes commonly used to extract syrup from maple trees. At post-screening Q&As, local audiences have inquired whether Lockhart’s film is to be viewed as a critique of Vermont’s residents and why the characters in her film don’t just get up and move. “The family in the film loves Vermont, and they have a connection to the state. Why should they have to leave?” asks Lockhart. “It’s important to point out that while the ghosts in the film do not commit any physical harm, they are committing psychological harm. I think there’s an element to some of these hyper-liberal spaces that, while being very radical in some areas (Vermont has Bernie Sanders!), still share a similar type of gaze and surveillance that they can’t shake. They may not like it, but they have to look, and I think that’s important to highlight in spaces where people feel like they haven’t done anything wrong.” Currently screening Inheritance at festivals across the country, Lockhart is also busy developing her feature directorial debut, a genre film that focuses on the relationship between a daughter and her dying mother.— EL