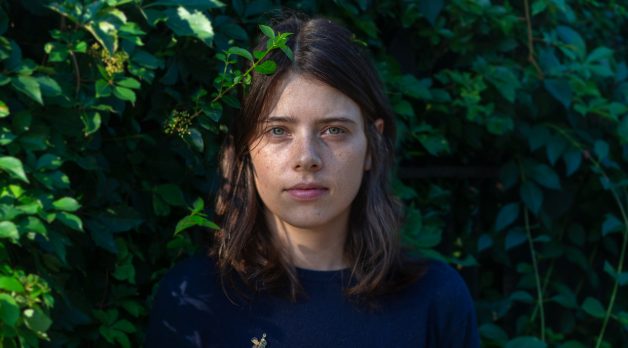 After finishing three short films while a student at NYU’s Tisch School of the Arts Graduate Film program–all, on the surface, quite different–Scottish-born writer/director Charlotte Wells only recently figured out the theme that unites them: denial. “They are all about characters denying or avoiding something,” she says. That said, the terms mean something different: “Denial is internal, and avoidance is recognizing something external but not dealing with it.”

Indeed, the strength of Wells’s uncommonly assured, powerfully subtle films is their depiction of characters sliding between denial, avoidance and then, at least in her third short, Blue Christmas, a kind of acceptance. The cooly observed Tuesday (2015) depicts a numbed teenage girl following her weekly routine only to end, hauntingly, with a private moment of grief. The near-wordless Laps (2016) is even leaner and more devastating. Amid the oppressive claustrophobia of a New York subway train, a young woman is jostled, groped, and thrusted at by an unseen male passenger, a sexual assault all the more upsetting because it happens in public. “Something not so dissimilar happened to me on the way to class,” says Wells. “I was shocked that I withstood it, that I didn’t speak up. I was convinced that nothing happened until I was getting a coffee, ran into a friend, and just burst into tears.”

Blue Christmas (2017), shot in a Scottish coastal town by ace DP Robbie Ryan [The Meyerowitz Stories (New and Selected)], is her biggest production and the most expressive in its storytelling. “It’s very much inspired by my family,” she says. “My grandfather was a debt collector–I used to ride around with him as a kid–and my grandmother was schizophrenic.” It’s Christmas, and a young husband finds odd solace from his unstable wife by interrupting his poor neighbors’ holiday to hustle loan paybacks. It ends with a stunningly dreamy sequence that was actually Wells’s beginning image: a burning Christmas tree. “After I made the film, I found out that what eventually had my grandmother committed involved a fire, which makes me think that I had been told that and it was somewhere in the recesses of my mind.”

Wells took “a roundabout path to film,” she says, first studying classics at King’s College London and then at Oxford. Around 2010, after working in financial services in New York, she ran a small crew agency for DITs in London. She entered NYU on a dual MBA/MFA track, intending to become a TV development exec or producer. “And then I made a film,” she says. “It was so collaborative, exciting and exhausting. It allowed me to channel all of the excessiveness I wanted into it.” Arriving at directing after so much other scholarship and work, she’s now catching up on viewing and accumulating influences: Claire Denis, Wong Kar-wai, John Cassavetes, Terence Davies. But it’s her tight band of film school collaborators, “something of a collective,” who she says she’s learned the most from. Next up: her first feature, Aftersun, about a young father’s vacation trip with his daughter to a beachside resort that’s inspired by her own vacation trips with her dad. — Scott Macaulay/Photo: Richard Koek