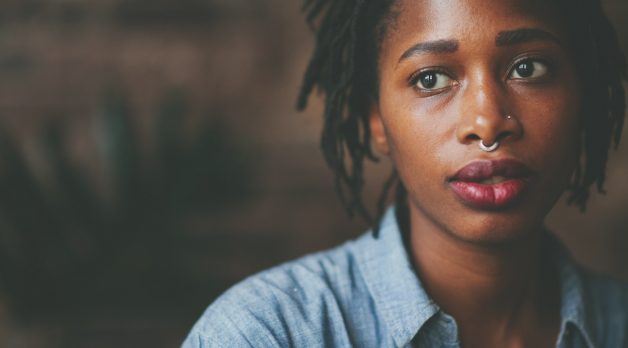 As a kid growing up on Roosevelt Island, Mariama Diallo wrote stories about tiny creatures in microscopic worlds and read a lot, sleeping with the Goosebumps books under her pillow and cultivating a significant obsession. Later, her mom gave her a book with a horrifying cover—so scary, in fact, that she put Wanted Dead or Alive: The True Story of Harriet Tubman at the back of her bookshelf. While she wanted to believe in a post-racial Barney utopia, the sound of the documentaries about Jim Crow her mother watched would waft in from the other room.

It was later, in a New York Blockbuster Video, when the 14-year-old girl who knew nothing about art films decided she wanted to make them. “It was a proclamation,” Diallo says, “that came before everything else.” By the time she enrolled in college at Yale as a film studies major, Diallo realized her commitment to directing was hollow unless she was also writing. Remembering those formative years, Diallo says, “Horror and sci-fi is all that would get me going. Black horror—there’s a lot there to be mined.”

Moving away from horror now would mean a tremendous loss for the genre. Diallo’s 12-minute short, Hair Wolf, which won a Jury Award at Sundance this year, is an absurdist creation that playfully digs into cultural appropriation. Set in a hair salon, the movie is sickly inviting, welcoming viewers into a world of white girl zombies lusting after black culture. Diallo unpacks the pernicious nature of cultural appropriation by lampooning it with a singular cinematic vision, transforming an idea, a concept, into a film.

“This film was made primarily for black audiences,” Diallo says in regards to Hair Wolf’s specific references to black culture. “I was trying to make myself laugh, grapple with the absurdity of my everyday experience, and create a visual representation of some thoughts in my mind.”

One challenge she pulls off flawlessly with Hair Wolf is tone. Diallo wanted to anchor the performances with real experiences from the actors’ lives, asking them to conjure feelings of being alone with someone when you don’t know how they might react. She wanted the threat of a menacing zombie to be absurd but the experience the characters inhabit to feel real. “I wanted the whole thing to feel like it’s funny,” she says, “but it’s not a joke.”

Diallo was recently part of the writer’s room on Terence Nance’s latest HBO creation, the fantastical variety show Random Acts of Flyness. She also directed four episodes. One segment she wrote and directed, called “I Had a Dream,” was inspired by her own recurring dreams/nightmares and follows Martin Luther King, Jr., experiencing an actual dream. Diallo is also now working on her first feature set in the Northeast. It’s horror—of course. “What better genre for a film set in the Ivy League?” — Taylor Hess