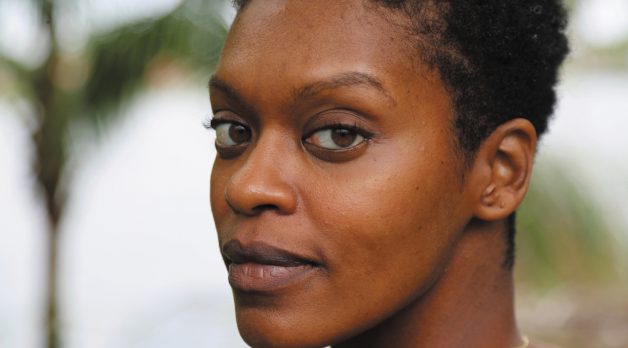 Miami-based filmmaker Faren Humes was working as a location manager on Barry Jenkins’s Moonlight in 2015, looking for a Liberty City apartment to shoot in, when the city announced the redevelopment of its Liberty Square public housing complex. The complex consists of hundreds of row houses that stretch for blocks, and the city stated that the development would occur in phases, with residents being shuffled around the complex as old buildings fell and new ones arose. The announcement immediately prompted questions, recalls Humes. “‘How long will this take?’ ‘What if I don’t want to live there during the construction?’”

She continues, “When I would talk to people, nobody had answers, and there was a distance between the lawmakers and commissioners and the actual residents. I was interested in this divide, and in questions like, ‘Who has the answers, who has the knowledge, and where is the agency [for the residents]? And, in this situation, what does agency even look like?’”

Issues of politics, gentrification, community and epistemology subtly collide in Humes’s evocative and assured short film, Liberty, which has won awards at Berlin, SXSW and the Miami Film Festival. In a series of beautifully captured scenes featuring teens Humes cast from a local high school’s dance troupe, two friends, Loggy (Milagros Gilbert) and Alex (Alexandra Jackson), practice a routine they’ll present at their new building’s groundbreaking ceremony, even as their relationship is strained by their impending separation and the confiscation of Loggy’s mother’s memorial. The short finds haunting imagery in the hollowed-out apartment complex while scenes unfold with documentary-like realism. Humes didn’t give her actors a script, guiding them instead through improvised dialogues. “I’m drawn to improvisation because I respect how we relate to each other as a community,” she says. “I value the richness of unspoken understanding, and in my filmmaking, I’m trying to create an experience within the realm of connection. I guess I was needing to have for myself a ‘black woman–connected experience,’ and this film was the channel for that!”

Born in Miami, Humes studied at University of Florida and then at Florida State University’s graduate film program. She worked as a production designer and spent time in New York as an intern for Jonathan Demme’s production company. Previous shorts include Our Rhineland, a period drama about Nazi sterilization of mixed-race Germans, and Macho, which deals with “hypermasculinity in the South” through the story of an uncle’s relationship with his effeminate 12-year-old nephew after the killing of a local trans woman.

Humes began Liberty as a feature script in 2017 and then traveled to LA to adapt it as a short while part of Film Independent’s Project Involve program. Now, having spent a year on the festival circuit, she’s going back to the Liberty feature. Working in longform, she says her approach will be “very different — much looser in structure.” “I want to bypass the cognitive and for my filmmaking to be very sensory-based,” she says. If the short version of Liberty posed queries having to do with home, rights and civic power, the feature will be exploring something even larger. “The essential question for the feature,” says Humes, “is, ‘What is the eternal?’ That’s the through line.” — SM/Photo courtesy of Faren Humes