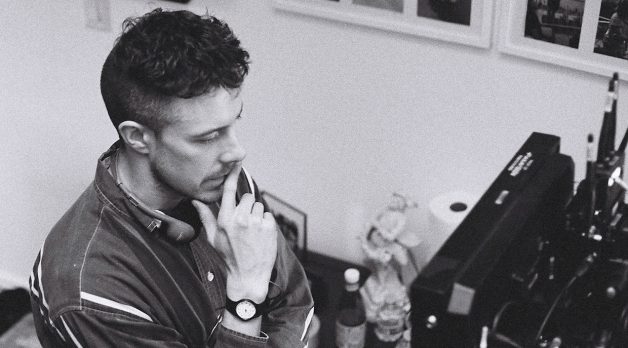 Writer/director Joseph Sackett had won some free film stock at a film festival and decided to “write something short and simple.” In a day, he wrote a draft of a story about a young boy who falls in love with his babysitter—and then dreams that he’s actually coursing through her veins, inhabiting her lungs. Shot by Jomo Fray two-and-a-half weeks later, and starring Colby Minifie and Tre Ryder, the short, I Was in Your Blood, elegantly moves from a tender series of stolen moments as the boy crushes on his babysitter to the trippy animated finale of his dream. “I had no intention of expanding it into anything bigger,” says Sackett, “but I kept thinking about the story. What if we did a Being John Malkovich version?” The result is Homebody, currently in late post-production and scheduled for industry presentation in November at U.S. in Progress in Wrocław, Poland. For the feature, Sackett has literalized the short’s tale of nocturnal transformation as well as its title. This time, à la films like Freaky Friday and Big, the eight-year-old boy finds himself actually inhabiting his babysitter’s body, a gender and generational swap that brings with it all the complications you’d expect. “I like the idea of drawing inspiration from slick, big-budget movies,” says Sackett, “but bringing in an accessible, queer, independent sensibility.”

Sackett, a Portland native who’s been living in New York since finishing NYU graduate film school, calls what he does “lo-fi high-concept.” He says Homebody won’t receive anything stronger than a PG-13 rating—“inhabiting a ’family-friendly’ space you don’t encounter a lot in the world of queer indie filmmaking.”

Body swapping and subversive genre stories are a thing for Sackett. His other recent notable short is Dominant Species, a chillingly absurdist work of queer sci-fi in which 10 aliens in human host bodies receive instructions in performative masculinity. “I had just seen Beau Travail,” Sackett says, “and I was also drawing humans learning how to eat. I wondered, why would a group of adults not know how to eat? I came up with the idea of aliens and host bodies, and after writing for a while longer I got the idea for one of the aliens to be queer. In hindsight, it’s about my own queer adolescence, about that feeling of isolation and fear. It’s like a journal entry from my gay 13-year-old psyche dressed up as sci-fi.”

When he’s not directing his own films, Sackett works as an assistant director. “The roles kind of intermingle,” he says when asked whether his on-set AD work has influenced his directorial approach. “I think I bring a soft, humane touch as an AD and a pretty practical, reasonable approach as a director. I show up to set differently, and those roles kind of inform each other.”

Homebody should be out on the festival circuit in 2021, and as a follow-up Sackett hopes to make a slightly bigger film that is again something of a genre mashup. “The working title is Cross Pollination,” he says. “It’s a queer sci-fi rom-com. There are alien abduction scenes, and there is a real meet-cute that hits all the notes. It’s as if in Notting Hill Julia Roberts was an alien instead of a movie star.”—SM/Photo by Rosa Gilmore