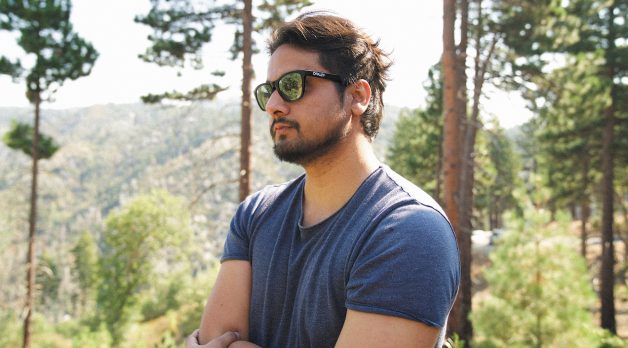 In 1998, when Rajee Samarasinghe was 10, his family left Sri Lanka—then in the middle of its multidecade civil war—for Irvine, California, where his youthful interest in illustration shifted to a focus on films. Taking advantage of free VHS rentals from a nearby public library, Samarasinghe would watch three to four movies a day. He quickly noticed that in a lot of mainstream films, “there wasn’t an interesting approach to form. That’s why I went to experimental film programs to learn.” After studying at UC San Diego, Samarasinghe completed an MFA at CalArts in 2016, where he was a TA for James Benning during his final semester.

The Los Angeles–based Samarasinghe has completed a number of experimental shorts—four since the pandemic started alone—which he’s just begun submitting to festivals. His subject matter, he says, includes “Sri Lankan civil war, my family and deconstructing documentary and narrative cinema.” Working in color as well as black and white, and in aspect ratios from Instagram’s rectangle to 2.35 widescreen, Samarasinghe says his self-described “formal eccentricities and innovations” stem from his interest in thinking deconstructively about film form. In a number of his works, one square—black or with an image on it—will float over the main frame, unexpectedly destabilizing the image as it appears or disappears. In this year’s silent short, the past, Samarasinghe alternates between forest shots suggesting Nathaniel Dorsky, but digital, and two women’s faces in extreme close-up. The latter images initially look like something from a commercial, but their duration creates a heightened awareness of how light plays over the human subjects.

The Eyes of Summer (which premiered this year at Rotterdam), shot in Samarasinghe’s mother’s home village obliquely tells the story of a young girl who befriends a spirit. The lustrous widescreen black and white is disrupted at the end, with a climactic shot of light streaming out from the cracks between a woman’s hands as she holds them over her face. Samarasinghe, who does his own color correction, emphasizes this tiny moment by turning that light into huge rectangular flares that dominate the image. Of his black and white work, he notes, “Sri Lanka is super lush and beautiful. I wanted to take that pleasure away—to make black and white interesting, too, but to put the emphasis on the subject matter and figurative aspects of what’s going on in the frame.”

Whether working silently or with sound, dialogue is rarely important to Samarasinghe. “Memories are usually silent in my head,” he says. “I want to put the spectator in a similar meditative state to reflect on these images.” That will change with Samarasinghe’s first feature, the currently in development Your Touch Makes Others Invisible, which has received support from organizations including the Sundance Documentary Fund and Berlinale Talents. The plan is to structure nonfiction footage around the fictional story of a young child who goes missing. Samarasinghe plans to shoot in the Sri Lankan city of Jaffna, which to this day has a heavy military presence. As many as 100,000 people have disappeared since the civil war started, and journalists are still routinely attacked. For this project, which he hopes to complete in 2022, Samarasinghe is planning for “a lot more dialogue, a lot more interview material. I want to document testimonies. Since I was very young, even before I knew how to make films, I wanted to really explore the space and these ideas.”—VR/Photo by Yanyu Dong