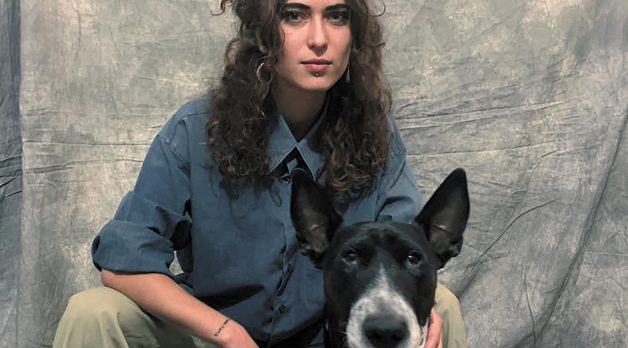 “I really fucking hated Kentucky and decided to get out of there as fast as possible,” says Julia Mellen of her upbringing. She’d never had a TV, let alone regular internet access, until enrolling in a new media class at School of the Art Institute of Chicago (SAIC), for which she had to buy a computer and quickly became “obsessed with how much internet culture there was I had been completely unaware of.” In 2015, she says, the curriculum focused on “the idea of being able to create your own identity separate from your corporeal form. I had missed that boat with the role-playing thing as a kid, but the idea was very cool.” She quickly enrolled in coding classes: “What I really liked was the control aspect. Our entire world runs on code and social media. The first time I built a website, I was like ’I feel like God right now.’ I love that sense of power.”

That quick assimilation of the internet as both user and creator led to the construction of the Extremely Online character she adopts in her short film Yung Lean, Please Be My Yung Love. In the first/only take she shot, Mellen addresses the camera directly, and specifically one very important target viewer: the titular rapper, for whom she’s got a (per the floating-screensaver opening titles) “really chill” dream date proposal. Cigarette in hand, Mellen monologues through her opening jitters, then shrinks herself, screen-within-screen, over an animated rendering of her proposed day, which begins with coffee at 6 a.m. and proceeds through a shower, a leisurely stroll through Chicago’s Garfield Park Conservatory, shopping and lunch in Chinatown and a pleasant, people-watching subway ride home.

Mellen’s voiceover is granular in its detailed recall and associations: the childhood connotations various plant smells in the conservatory evoke, the ginger candy she buys in Chinatown and how it helps her during mushroom trips. Her nerve-y, webcam-rhythm spiel is at productive tonal counterpoint with the visual serenity of the day as rendered through animation made in SketchUp, a 3D modeling program primarily used for architectural design. The virtual camera slowly floats through minimalist renderings of Mellen’s apartment to the broader Chicago landscape outside. Humans are multiovular heads and limbs, their skin texture cross-hatching lines—Mellen tried to sculpt herself within SketchUp’s confines and liked the results, which she compares to a children’s drawing.

The short’s inspiration was observing fans who interact with celebrities online as if they know them, commenting to Cardi B and similar mega-stars, “Oh my god, I’m so sorry I missed your call! I was in the shower!” Mellen is personally more of a Lil Wayne fan and hasn’t actually listened to a lot of Yung Lean, but she felt that given “the demographic I fit into—fake edgy white girl at an art school—Yung Lean was more realistic.” Completed as a graduating senior project, Yung Lean has screened at festivals including the London Shorts Film Festival, where it won best international short. Mellen’s side work has included teaching subjects like 3D modeling, coding and video game design at Chicago nonprofits: “I’m not all that advanced in any of these realms, but I know enough to explain it easily to kids, and I’m definitely working on their wavelength.” Her next project is the similarly animated Jealousy. “I am often in the shower thinking about girls who I feel are better than me and imagining all the awful things they could think or say about me,” she says. “It’s this weird masochistic practice that I adore, like pressing a bruise. I’m trying to channel thirteen-year-old, insecure hormonal obsession.”—Vadim Rizov/photo by Jesus Ming and Raquel Deren