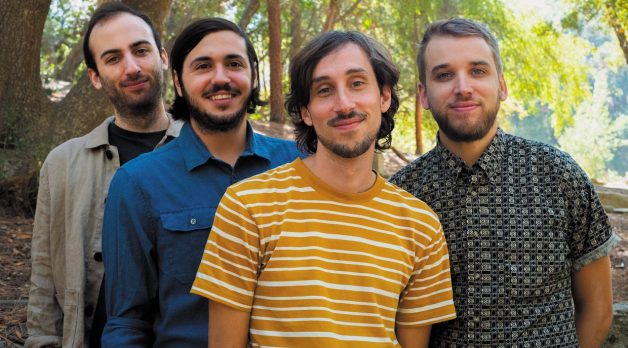 A bizarre sacrificial rite of passage for a suburban neighborhood’s teen population; an inquisitive woman discovering a portal to the past via her late aunt’s hurdy-gurdy; an awkward businessman entering the wrong hotel room and stepping into the crosshairs of quarreling lovers—these are but three stories in the recent cinematic output of Omnes Films, a Los Angeles-based collective of filmmakers. Making their presence known with the world premiere of Tyler Taormina’s debut feature, Ham on Rye, at the Santa Barbara International Film Festival in early 2019 (and its international premiere later that summer at the Locarno Film Festival), Omnes has since overseen the production and festival premiere of a second microbudget feature, Jonathan Davies’s Topology of Sirens; several shorts and music videos; and a third feature currently in pre-production, Carson Lund’s baseball-focused Eephus, which will costar Boston Red Sox Hall-of-Famer Bill “Spaceman” Lee.

The collective originated at Boston’s Emerson College. Several film students befriended one another in 2010, but a love for experimental music connected Davies and Taormina. Davies’s dorm-mate, Lund, remembers the resulting drone rock duo, Fjords, to this day: “I think I first knew Tyler not from knowing his face but by this loud droning sound coming from the room next door,” Lund recalls. “While I didn’t play, I was always in the audience,” admits Michael Basta, a member of the collective whose short, Bernard Checks In, premiered earlier this year at the NYC Independent Film Festival and is being adapted into a feature.

The friends’ shared appreciation for foreign cinema and “difficult” filmmakers like Andrei Tarkovsky didn’t become fully apparent until after graduation. After relocating to Los Angeles and writing and directing Suburban Legends, a modest children’s web series starring newcomer Haley Bodell, Taormina grew interested in more personal short work and enlisted his Omnes colleagues to collaborate on a new project. Davies was hired as the music supervisor, Lund as cinematographer, and Basta as first AC, in addition to them coming aboard as producers. Initially envisioned as a short that subsequently grew to feature length, Ham on Rye recasts Bodell as a teen in a suburban town preparing for what, at first glance, appears to be the most sacred of all evenings: the local high school prom. The boys and girls get all dressed up and head to the local delicatessen where they couple up, dance and are greeted by a blinding angelic light in the backroom that makes them vanish without a trace in a state of nirvanic bliss. The day’s aftermath for those who remain in their bland town provides the film with its sardonic closing act.

Released via Factory 25 in the fall of 2020, Ham on Rye set the stage for the type of collaborative films Omnes wishes to make in the future. “We get a thrill out of making films set in L.A. that do not adhere to the conventions of ’L.A.-set films,’” Lund says. “While we’ve made films here because it’s been convenient for our specific budget levels, we like the idea of instilling an uncertainty within the viewer, who can’t quite place where the films are set. We’ve had to frame out various L.A. elements, such as palm trees and Priuses, for example.”

Also shot by Lund and playing the festival circuit after its premiere at this year’s FIDMarseille, Topology of Sirens is likewise set in Los Angeles but equally foreign. Starring nonfiction filmmaker (and 2019 New Face) Courtney Stephens as an inquisitive yet subdued sonic sleuth, Davies’s film provides the opportunity to incorporate a selection of experimental sounds he and Taormina created back in their music days. And while the film might be challenging for some audiences, its idiosyncratic form is a badge of honor for the collective. “There’s a good experimental/avant-garde scene here,” Davies says, “but the ’indie feature’ scene is pretty small, especially when compared to cities like New York. Someone once told me that there’s a lot of people making movies in L.A. that could theoretically appeal to anyone, but there’s not a lot of people making movies in L.A. that are geared to a niche audience. We’re hopefully capitalizing on that, and we hope that others will too.”— Erik Luers