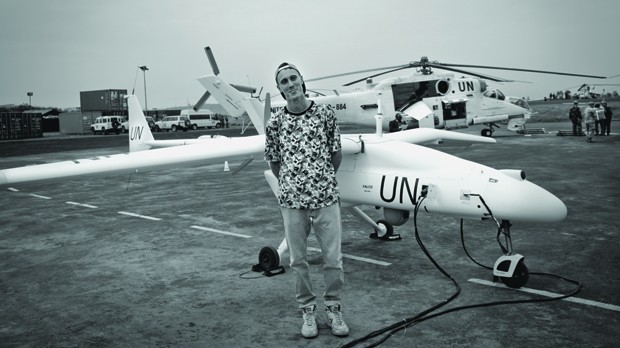 Baltimore-based filmmaker Theo Anthony made short films and studied cinema theory at Oberlin College, but he credits a stint in the Eastern Congo producing and shooting for VICE and AFP as his most intense learning experience. “I was working as a correspondent covering conflict-related issues,” he says. “I was this totally naive kid who had done hometown music videos trekking across the Eastern Congo. I wasn’t ready to go into a war zone, and it kicked my ass.”

Finding his footing, Anthony produced a short VICE series and was a freelance correspondent for the AFP, but it wasn’t until he made two short docs of his own that he “found his groove.” He explains, “I felt very uncomfortable doing journalism work — there’s a lot of pressure to tell an objective story, but I think that’s a myth. You’re going to situations looking for specific stories to fit specific outsider narratives. And then you see how [those stories] are received, misused and misappropriated. It was unsettling — those aren’t the statements I want to make.”

Based on these short docs — including Chop My Money, which premiered at Toronto before traveling this year to Atlanta, Maryland and other festivals — as well as other shorts, music videos and a work-in-progress feature, the cinematic statements Anthony does want to make are vividly realized collisions of personality and place, keenly aware of both the filmmaker’s perspective as well as the interiority of their subjects. Chop My Money, for example, amplifies and stylizes the outsized personas and streetwise ambitions of three East Congo kids — Patient, Gullain and David. “Patient is 14, and he’s been on the streets since he was five,” Anthony says. “He is so smart and charismatic, a firecracker of a kid. I spent a couple of months hanging out with him, having conversations about how the film would look, and started to write a script — which they rejected! So, it was an interesting collaboration.”

Anthony says the lower cost of living in Baltimore enables him to take occasional commercial jobs but focus mostly on his own work, which includes a work-in-progress feature doc about a 14-year-old competitive body builder who Anthony expects to follow through high school. “If he goes to the Olympics, I’ll have really great access from him,” Anthony says. “And if he just turns into a super-normal kid, I’m interested in that, too.” And then there is his “wandering essay film” about rats that grew out of a short Anthony was making about the Baltimore tradition of rat-fishing — “hooking peanut butter and bacon to a fishing rod.” “It’s a new and vulnerable project for me,” he says. “It traces how rats have come to symbolize death and disease and become perfect vessels for all of our sin.”

But Anthony continues to work on shorts. Peace in the Absence of War, available online, was shot in the filmmaker’s hometown in the days following the killing of Freddie Gray, and it’s a haunting work with formal strategies that follow the credo Anthony has set for himself following his days in the Congo. Focusing not on protestors, or looters, Anthony essays the impassive, bored or just fidgety media, riot police and on-air talent who gaze on from the sidelines before delivering the official narrative. “I had photos of the city on fire,” he says, “but I chose not to contribute to the conversation in that way. If a bunch of people are pointing the camera in one direction, I try to point it in the other.” — S.M./Photo by Simone Bazos