If You Build It, Will They Come? On the Treefort Film Fest 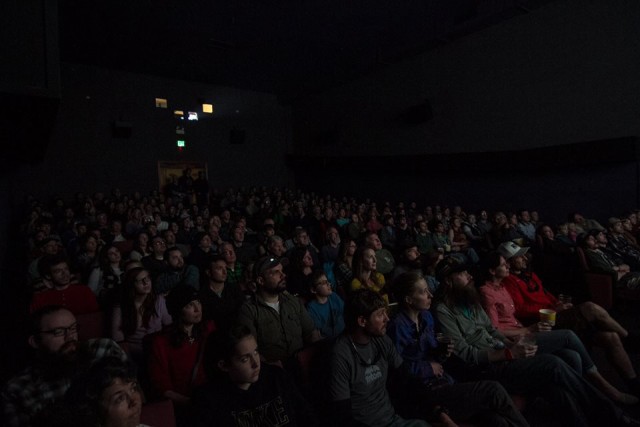 Idaho’s only city of 100,000+ residents sits in a valley north of the Snake river. Boise is a boomtown these days, with over 150,000 new residents since George W. Bush took office and new west corporate bravado written all over it. The flat city’s pert, immensely walkable and surprisingly bumpin’ downtown extends into residential areas north and east. Looming hills ringing much of the town can be glimpsed from almost anywhere in the city proper as long as the light is just so; it’s an oddly marvelous place to roam around. A gold rush town after the French and Native Americans fought over it for much of the early 19th century and eventually the capital of Lincoln’s Idaho Territory, it became a military outpost as part of the march of manifest destiny. Lincoln’s successors took until the 1870s to push the natives all the way to the other end of the state, where the haze of potato pollen pollution hangs over the rickety farmhouses dotting high plains reservations to this day.

There’s a music festival there, a very well programmed one, with hundreds of bands you’ve maybe heard of if you read Pitchfork alongside RJD2, Dan Deacon, and three days of Built to Spill in front of their homies. It’s the brainchild of Eric Gilbert, a musician who looks sharp in a hoodie and plays a mean game of pick-up basketball, especially when the rim is attached to a graffiti-strewn van. The festival is called Treefort and it’s one of those four-day affairs in which multitudes of bands overwhelm a city for a long weekend while attendees sprint between shows, wiling away time between sets at beer tents and sausage trucks, yoga sessions and hack conferences, readings and screenings.

That last component consisted until recently of simply music docs, but this year Gilbert farmed out the film program to a pair of the northwest’s most scintillating new curators, Ben Morgan and Ian Clark, who put on last month’s Eastern Oregon Film Festival. While retaining a significant amount of titles from their scrappy event in Idaho’s western neighbor, they put together another endearingly odd slate of films unlikely to otherwise find their way to Ada County anytime soon; a pity more people weren’t there to see them.

It wasn’t the venues’ fault. The Flicks, Boise’s adorable four-screen arthouse – complete with an attached video store and mean Greek salad at the boutique concession stand – lent a screen to the proceedings. So too did The Shredder, a punk club turned crackerjack microcinema during the day, at night reverting back into a place to see bands with names like Perfect Pussy (Sunday/Monday midnight closers and really f’ing rad, by the way). Neither was in the general walking path of the festival however, being further south than the food trucks, rock clubs, business incubators and folksy cafes playing host to the music and the people that came with it. The tatted up hoards rarely spilled into the movies.

Film fest dignitaries and guests could tell the music crowds weren’t leaping over themselves to see indie films. Eddie Mullins’ Doomsdays, selected by our editorial staff as a 2013 Best Film Not Playing at a Theater Near You, was the festival’s Filmmaker Magazine Showcase and opening night film. Usually a crowd-pleaser, walkouts were more common than anyone had anticipated. Dave Carroll and Ryan Scafuro’s Bending Steel played to a crowd of ten on Friday night even though main subject Chris “Wonder” Schoeck showed up to do just what the title suggests after the show. Despite offering Q&As Skyped in from across the country, Jeremy Teicher’s Tall As The Baobab Tree and the Safdie brothers’ Lenny Cooke weren’t able to draw many folks either; over half the crowds left before the talkbacks began. (Granted, me speaking into a computer screen at a disembodied head might not be much of a draw, unless that head is famous or sings or something). No one but the filmmakers, the staff and three very old white people came to a panel that evolved, on the fly, into a roundtable on Saturday morning.

However, a sellout crowd descended upon The Flicks on Sunday afternoon to see Ben Knight and Travis Rummel’s DamNation. The SXSW Documentary Spotlight audience award winner ruminates on America’s overabundance of dams and quickly depleting natural resources. The directors were tearful at the Q&A, stirred by a strong audience from the state much of the film was shot in. A panel followed afterward with several figures from the Gem State’s natural preservation scene. It was the type of thing a thoughtful film festival can provide an audience that HBO On Demand can’t: no one is going to get motivated to fix the damn system holding a TV remote.

David Alvarado and Jason Sussberg’s 78-minute The Immortalists follows the travails of British gerontologist Aubrey De Grey, a genius drunk with an intense beard attempting to cure aging. It won’t shock anyone to learn that he doesn’t succeed by the film’s conclusion. Swede Anna Eborn’s Pine Ridge, a participant in last year’s Venice Film Festival, doesn’t necessarily sprint through its slender 80 minutes of gently manipulated, sun dappled vérité on a South Dakota Indian reservation. With direct address or interviewee voice overlaid, the picture – regardless of how pretty it is – has a troubling ethnographic distance; I was never sure watching it just what’s at stake for the filmmakers. Eborn profiles the life of a dozen or so weary residents on a rundown Lakota reservation. At the beginning one character suggests was initially given to the Lakotas by the white man because of its barrenness, but the barren stretch of South Dakota land is made to seem rather poignant and beautiful despite its rampant ugliness.

Besides a remarkably energetic punk set I saw by some local chaos herders who go by Teens (they’re known for ripping down piping and scaffolding during their shows, or at least for encouraging the crowd – half of whom end up on stage by set’s end – to do it for them), the thing I’ll never forget from the festival was Wetlands A nose-picking, pussy juice shocker, German director David Wnendt’s sophomore film is replete with eye candy dolly moves, a Fight Club-esque CGI opening credits sequence full of bacteria and a protagonist who tries to intentionally get vaginal infections on impossibly filthy public toilet seats. Of course it’s all about Mommy and Daddy issues, but whatever tension the narrative ultimately lacks (for a movie this genuinely shocking, it starts to fade dramatically well before its running time concludes), the movie is carried a long way by Wnendt and star Carla Juri’s sheer verve. Fresh from Sundance, it contains a bunch of stylistic tropes borrowed from Trainspotting and a lead performance by Juri that leaves you wondering what she’ll do next; she’s clearly a star. And I couldn’t have seen it in a more appropriate place; Perfect Pussy would be an entirely commendable Rooftop Films style opener for the picture in improvised screening spaces. But would the kids come?