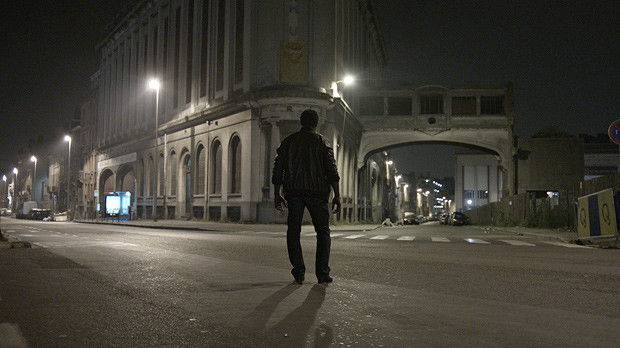 A sort of Taxi Driver set within the world of European immigrant culture, Nicolas Provost’s The Invader is one of the most intriguing and seductive films currently on the festival circuit. It premiered in Venice before screening in Toronto and now Rotterdam, and it marks the feature debut of Provost, a Belgian video and installation artist whose work has always taken as its subject the way cinema orders images into narrative.

The story opens with the camera fixed on the vagina of a beautiful blonde woman, sunbathing nude on a Southern European beach. It pulls back, taking in the scene of vacation frolickers until we spy Amadou (Issaka Sawadogo), an immigrant from Africa literally washing up on shore. After a hallucinatory sequence that sends Amadou from the beach to the city (Brussells), the film proper begins. Amadou is now part of an illegal labor force contracted out for day labor jobs by an imperious mid-level crime boss. An altercation with the boss sends Amadou on the street, without a job, money or papers. Spying a beautiful blonde executive, played by the stunning Stefania Rocca, he uses his considerable charm, verbal dexterity and sexual persuasiveness to insinuate himself into her life. Soon, though, his own anxieties, his resentments and feelings of being out of place, send him on a path to self-destruction.

Provocative in its socio, sexual and racial politics, The Invader makes us watch as an initially honorable African man gradually implodes when the shiny images of Western culture are dangled before him. The film plays with our sympathies, and our stereotypes, and it does so with a sleekly absorbing visual style. (Scott Macaulay)