“When I Looked at All the Ways You Can Fail in VR, That Was a Turn-On”: Doug Liman on His VR Sci-Fi Thriller, Invisible 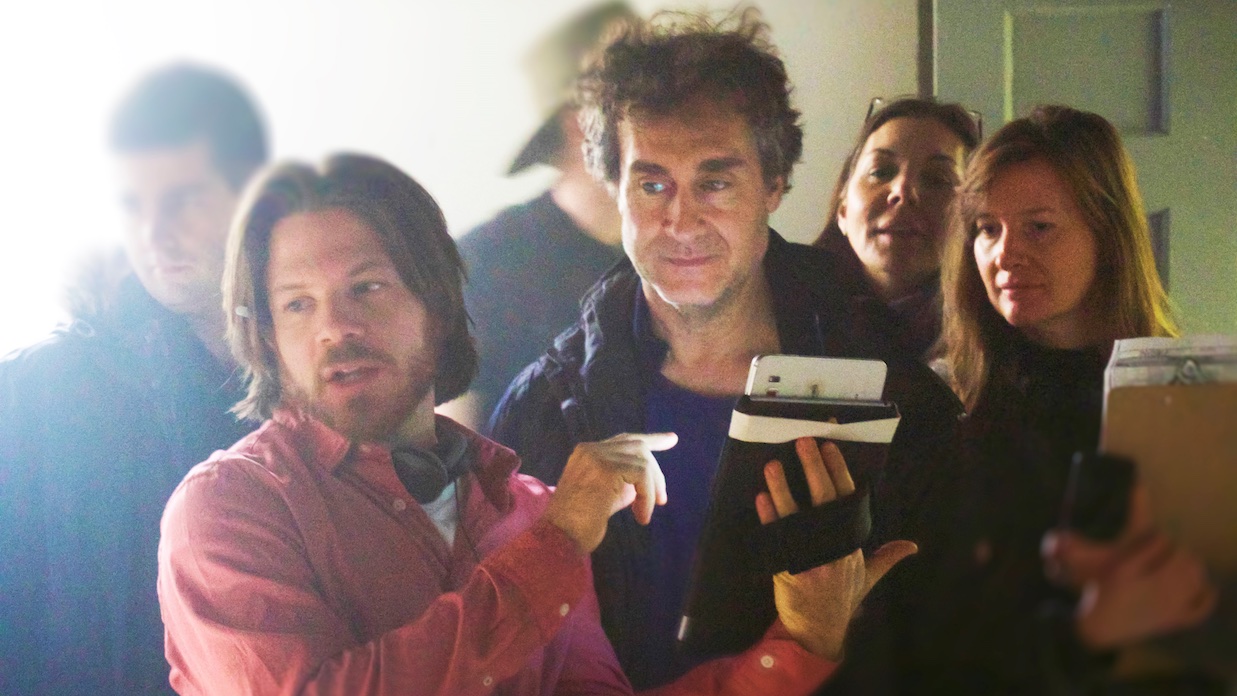 Doug Liman on the set of Invisible

Released today, Invisible is director Doug Liman’s first foray into virtual reality, a five-part science-fiction thriller that places viewers in the midst of a tale involving corporate secrets, future tech and family treachery. The series takes off from the question one sometimes mulls: what superpower would I choose for myself? Says producer Julina Tatlock of the production company 30 Ninjas, “One of the top superpowers people would choose is invisibility — and we’ve all dreamed about being rich. By creating Invisible in VR, we are able to immerse the viewer into that glam, exotic and at times terrifying world in a way no other medium could offer. We’ve taken a fast-moving cinematic story-created a world, and plunged the viewer into the story from frame one.”

In Invisible, Sofia Black D’Elia plays the unexpected heiress of the multinational Ashland Family, a young woman doing humanitarian work when she receives news that she’s inherited the family fortune. Her scheming uncle, who her late father suspected of plotting his death, wants her to sign everything over to him in exchange for a payout that will set her up for life, but the woman decides to dig deeper into the family secrets she’s always distanced herself from. The series is fast-moving, jumping between varied locations, and, in terms of the VR, it doesn’t try to overwhelm. The crisp storytelling means that viewers aren’t left stranded in locations waiting for the action to start. Instead, viewers will find for themselves vantage points to watch the short scenes unfold, being startled throughout by unexpected vantage points — like from the bottom of a grave — or bursts of action, like a hospital corridor fight between orderlies and security guards and invisible attackers.

Liman, of course, burst onto the independent scene in 1996 with his second feature, Swingers, and has consistently surprised with his genre-hopping directorial choices, from the Angeleno caper film Go to the big-budget marital action drama Mr. and Mrs. Smith to the gritty franchise-starting The Bourne Identity. As Liman relates below, VR is yet another arena for him to explore, learn about, and learn from.

Invisible was written by Melissa Wallack (Dallas Buyers Club) and was produced with a team including Condé Nast Entertainment (CNÉ), Jaunt, Samsung Electronics America, Inc. and 30 Ninjas. It is presented by Lexus and is available through Samsung VR or through the Jaunt VR app on iOS, Android, Gear VR, Oculus Rift, HTC Vive and 360° viewing on major desktop browsers. It will be available later on CNE’s The Scene.

I spoke to Liman last week after strapping on a headset and watching all five episodes.

Filmmaker: This is your first piece in VR. What attracted you about the medium?

Liman: It seemed like such an exciting new way to tell stories. I love the idea that it’s this sort of perfect partnership between the filmmaker and the viewer. The filmmaker is curating the experience and creating the experience, but the viewer has some control. It’s almost like the amusement park equivalent of storytelling, and that to me is so exciting because I try to create movies and TV shows that really involve the audience, that draw them in. You know, I sometimes go to Times Square and pop into a theater and watch an audience watching one of my films, and my favorite moment was [being in the theater] watching Mr. and Mrs. Smith. I was up on the balcony, sitting in the back, and it was the fight scene between Brad and Angie. The guy in front of me stood up and started shadowboxing the screen. This guy was so immersed in the movie, he didn’t realize he wasn’t participating in it! Afterwards, I started having dark thoughts, like, is he acting out some issues he has with his wife? Should I be happy he’s playacting hitting Angelina Jolie? But I’ve always wanted to get the audience involved in the experience, so I was drawn to VR on that level. And, to be honest, I’m also drawn to a challenge, which is why I keep changing genres. And when I looked at all the ways you can fail in VR, that was kind of a turn-on to me.

Filmmaker: It’s funny you say that. I saw a VR piece that made me want to write a piece called, “I Failed as a VR Viewer.” It was only hours after watching it that I realized that I, as a viewer, did everything wrong.

Liman: You were looking the wrong way?

Filmmaker: Yes. I was carrying over all of these assumptions I have as a film viewer, and I was resisting the things the VR was doing to engage me in the story. Those things were, I thought, rather convoluted. In a movie, information could be conveyed with a single cut. So, for you, as a filmmaker, what was that VR learning curve like?

Liman: First of all, you have to unlearn a lot, which is exciting for me. I often think back to my origins as a filmmaker, and the rules I broke to make Swingers. If I had known all the bad things that could have happened, I probably wouldn’t have broken those rules. On The Bourne Identity, I would fight with my line producer, who would tell us all the things we couldn’t do that I had already done on Swingers. We had a huge budget, and he’s saying we can’t afford it? I used to joke, “On Swingers we couldn’t afford the guy who told us what we couldn’t do!” So I was trying to get back to that place, where you’re not confined by your own assumptions or by your own rules because things have worked for you in the past. How do you come to each project fresh, like it’s the first film, like — for me, it’s Swingers?

Filmmaker: So what were some of those things?

Liman: How do you tell a story? What’s the script form? We had [early] scripts I really liked, and we shot tests, and they were awful. This form of [VR] storytelling didn’t work — it felt like you were watching a bad videotape of a play. VR is supposed to be immersive — I want that guy shadowboxing the screen! Instead, you were like a fly on the wall, and not in a good way. Like, “Okay, that’s happening over there, and I guess I could watch it.” It was like being in the subway and watching people talk — you weren’t in the scene. The subway is actually a good analogy because one of the things we discovered is that sometimes it is really compelling to watch two people talk on the subway, but they better be having one hell of a fight. So, I realized that the level of character and storytelling, just in the script stage, needed to be elevated because the VR was going to create a sense of distance. The performances, storytelling and character work needed to transcend. The initial scripts that would have been great in traditional 2D television were not going to work. Luckily, we did tests, six or seven months before we were slated to start shooting, we shot scenes with actors, in VR, and we had time to work on the editing and come to this realization that great VR is going to start with great VR scripts.

Filmmaker:The big question in narrative VR seems to revolve around agency — how much do you give viewers? How do they position themselves in a scene? And how much are they able to affect montage? Here I noticed you carry over some techniques from traditional film that were interestingly effective in a VR format. You had plenty of hard cuts, and in one scene, during a two-shot, you cross the line in the middle of the conversation. That’s a startling film trick, and it was startling on VR too. And then there are scenes where the viewer is given very clear choices. For example, in the hospital fight scene with the invisible person in the first episode, you can watch the people being attacked, or you can watch the reaction of your main characters to the people being attacked. I stayed on the reaction, which I suspect is the opposite of what many people do.

Liman: I’m glad you pointed out that section of the fight. That doesn’t happen by accident — it was thought out from the script stage. It would be fun to see his reaction because he’s seeing an invisible person beat the crap out of somebody, and seeing the invisible person beat the crap out of someone is also fun. So both angles are winners. Or, halfway through, you can look from one to the other. That for me is VR at its best. As opposed to a scene, “The scene is happening over here or you can look at the wall.” Why, then, do I have to be wearing the headset? I don’t want to look at the wall! If you haven’t built it into the script, the greatest filmmaker in the world can’t make it a compelling experience. The key is, you have to have a story and characters that are compelling so that you want to look and find them. Even if you are looking in the wrong direction, you are desperately trying to look in the right direction because you care about the story and the characters. That is so much more important in VR. In film, I can make you care, I can shoot a giant close-up. I can manipulate you into caring. I don’t have that option in VR. I don’t want to keep harping back to the script, but if from the very foundation you didn’t care about these characters and what was happening, you wouldn’t feel compelled to care about them in the world and find them. You have to create a world that people watching will be so drawn into that they’ll then do the work to find the story. What’s important are short scenes that get right to the heart of it, with plenty of conflict and drama and visually compelling environments. In 2D film, you do a closeup of a movie star and the background is out of focus, and you can hold the audience. But in VR those tricks are not available to you.