Entertaining Violence (Or, The Walking Dead and the Future of America) 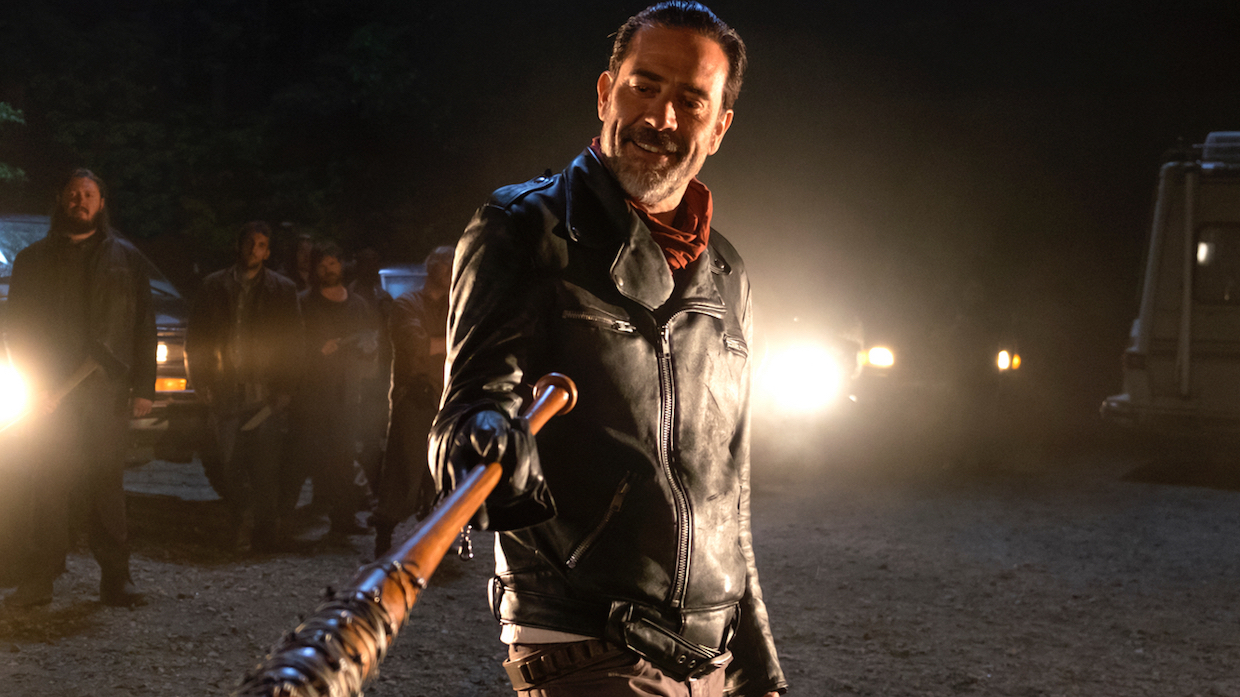 Warning: This post contains major spoilers for The Walking Dead and the future of America

In case you’re behind on your DVR, allow me to catch you up on the much-talked about cliffhanger ending from last season’s Walking Dead finale. After a ton of build-up, the show finally introduced Negan, a well-known villain from the comic source material infamous for bludgeoning his victims to death with a baseball bat wrapped in barbed wire. His weapon of choice.

In the final moments of the finale, Negan overpowered the show’s main characters, lined them up in a circle, and wielded his iconic bat above them all, preparing to claim his first victim.

Then… the show’s camera switched from its regular omniscient perspective to a subjective POV shot. And we watched from a mystery victim’s perspective, presumably one of our heroes, as Negan pulverized him or her into a lifeless, bloody corpse.

Blood trickles down the lens. Cut to black. And then credits.

What followed was a six-month midseason hiatus, one that left a passionate fanbase to endless speculation and theorizing, plus the occasional teasing quote from the show’s cast and crew about how earth-shattering the identity of the mystery victim was going to be when we found out in the season premiere. The whole thing was basically a gorier, crueler spin on “Who Shot JR?”

The Reddit speculation piled up as fans argued over which character’s death they had witnessed, and which of the show’s main characters would no longer be returning come October. Would it be Maggie? Daryl? Abraham? Glenn?

Spoiler alert… it was Abraham, and in a special bonus bludgeoning that happened midway through the show’s October 23 season premiere, fan-favorite Glenn bit the dust too. Cool. Two bludgeonings for the price of one.

But as is often the case with twists like this, the point wasn’t so much the resolution as the build-up. Whether the audience found themselves happy or sad about the identities of the victim(s), this cliffhanger more than achieved its primary purpose. To extend and deepen engagement. To get people talking. To launch a thousand fan theories.

Meanwhile, back in the real world…

In an “exclusive interview” with Forbes conducted last week, Donald Trump’s son-in-law Jared Kushner shared some never-before-revealed top intel on, in his humble opinion, how his father-in-law won the White House.

Chief among that intel? The fact that Kushner’s team had placed anti-immigration, pro-Trump campaign ads during TV shows in key swing states where that issue proved especially resonant. And guess which show Kushner singles out as one he targeted specifically?

No, sorry, just kidding. It was The Walking Dead.

The logic here is sound, and really quite simple. It’s demographics, not rocket science. There’s a population of undecided white male voters in Ohio who probably don’t like immigrants so much, and hey, they’re also probably going to watch that hugely popular zombie show on Sunday night. What better way to get them inspired to go out and vote than to air some really provocative, alarmist anti-immigration stuff during their favorite weekly massacre?

But let’s linger on this snapshot for a second. On a Walking Dead fan sitting down to his much-anticipated episode. Kushner doesn’t specify which episodes specifically were targeted, but let’s just imagine that it was the October 23rd season premiere. Let’s imagine that this Walking Dead fan is all primed for bloodshed, that he’s got his VIP ticket to the execution, and he’s ready for an all-you-can-eat feast of barbed wire bat action. He’s hungry for violence. He gets plenty of it (plus two deaths, nice!).

Meanwhile, back in the real world…

Guess what he’s fed during his commercial interruptions?

A lot has been written in the wake of Donald Trump’s election about fake news. About our “post-truth” world. I might argue that we’ve been living in a post-truth world for years, at least since the invention of the printing press. What our society is experiencing now, what is feeling like a bad acid trip, is actually a very potent, very dangerous strain of “post-reality.”

Post-reality is what happens when someone comes along who understands that the human brain doesn’t crave a strict division between fact and fiction. That actually what we desire is the exact opposite. We want our lives to play and feel like a story. A movie, and a really entertaining one at that.

So what this guy realizes is that if the circumstances are right, this hunger can transform everything in this world into entertainment. That politics can be something that’s consumed and enjoyed, binge-watched like a really engrossing TV show.

In our new reality television reality, everything is pliable. Things like facts, morality, even basic human rights become nothing more than storytelling devices. All up on the chopping block. All worth voting off the island as long as the storytelling is compelling enough.

So yeah, if you can’t tell, I’ve disavowed myself of the narrative that Donald Trump is some incompetent dunce. I’ve purged from my brain the storyline where he’s just some cranky old guy sending out Grandpa tweets at random. That he’s somehow fumbled his way into the White House by accident.

I understanding the allure in this narrative, it’s just no longer believable to me. There’s a comfort in believing our democracy and our institutions have not already fallen, that Twitter or The New York Times or the bitter RNC will come along and saves us at some point. But that presupposes that they are stronger than this man’s entertaining fascism. And so far, that’s not the movie I’ve been watching.

Look, I’m not saying that this guy is invisible or that he’s some brilliant Machiavellian supervillain playing a game of Wizard Chess six moves ahead of the rest of us. We can beat him, we’re just going to need a really compelling story to do it.

Because what I am saying is Donald Trump is a great fucking storyteller — if not the best in the world, then certainly the most powerful. And that he’s weaponized storytelling against us.

He’s tapped into a vague, universal anger. The worst parts of the human condition, the parts usually hidden away from civilized society. And he’s developed this anger like a writer develops plot, grown it like a filmmaker grows tension.

Like a great storyteller, he chooses his words carefully, all while making it appear totally natural at the time. He doesn’t explicitly encourage violence perpetrated in his name (not usually, anyway). He just tells his followers to Make America Great Again.

He overpowered our media by exploiting their fatal flaw — complicity in a system powered by profit. In the pursuit of ratings, ad dollars, subscribers, he got everyone from CNN to SNL to whoever runs Twitter hooked on his special brand of deadly but entertaining narcotics. Sure, those tweets might lead to an unprecedented uptick in hate crimes. Sure, they’ll almost inevitably lead to the erosion of basic human rights. But the customer is always right, and the customer is eating this stuff up.

You know the guy’s a great storyteller when he’s even confident enough to show us his cards midway through the hand. “I could stand in the middle of 5th Avenue and shoot somebody and I wouldn’t lose voters,” he smirked. Like a magician revealing his tricks.

He can say that because he knows he’s winning. Whether we’re condemning his latest tweet or praising it, he’s our focus. We’re living inside his narrative now. We’re watching his TV show.

So what’s going to happen next season? I don’t need a spoiler warning to reveal that it’s going to be bloodier, scarier, more cataclysmic and oddly satisfying and immeasurably more terrifying than anything we could speculate about right now. It will be because it has to be. The only other option is anticlimax.

Meanwhile, back in The Real World…

We’re left to speculate. We anticipate. We share our fan theories.

This theory is a bit far-fetched, but go with me here…

Maybe the answer was hidden in plain sight all along. Maybe it wasn’t actually Abraham or Glenn on the opposite end of Negan’s baseball bat last season. Maybe the real answer was right there in front of us in that finale, in its switch from an objective camera to a subjective POV. Maybe all of our speculation and theorizing was only to avoid admitting what the show had already told us.

Us. The viewer, comfortable at home, safe at a distance, wrapped up in our Snuggies just lapping up the horror of our favorite TV show. Tweeting and texting and theorizing and never looking away.

We felt safe because we knew that the bat couldn’t pass through the screen. This isn’t Videodrome. That kind of stuff doesn’t happen in the real world.

Only it does. And it already has.

And this one is so entertaining, and the stakes are so high. How can we do anything but sit back and watch?