Lessons from The Reluctant Radical: How The First Amendment Protects Filmmakers 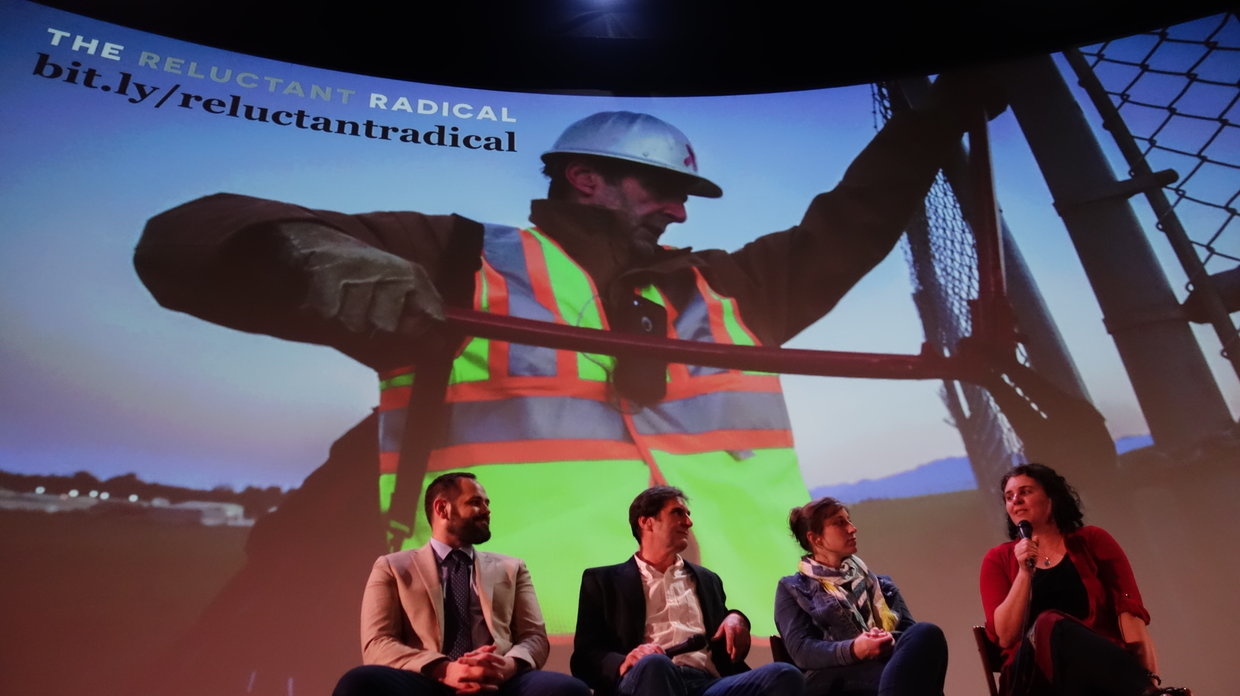 by Paula Bernstein
in Filmmaking
on May 4, 2017

Lindsey Grayzel and Deia Schlosberg had never met, but on October 11, 2016, the documentary filmmakers were each arrested while filming #Shut It Down climate activists who turned off all pipelines carrying Canadian tar sands oil into the U.S. as part of a direct action protest.

Though Schlosberg was in North Dakota and Grayzel was in Washington, the two filmmakers quickly found themselves in remarkably similar situations. Along with two other filmmakers, they were arrested and charged with the same felonies as the climate activists, charges carrying penalties of up to 40 years in prison. Since then, their charges have been dropped/suspended and they have joined forces to bring Grayzel’s feature film, The Reluctant Radical, about Ken Ward, one of the #ShutItDown activists, to fruition.

On April 27, as part of The Portland EcoFilm Festival at the historic Hollywood Theatre, director/producer Grayzel, co-producer Schlosberg, the film’s subject, Ken Ward, and Grayzel’s attorney Braden Pence, were on hand to screen works-in-progress clips from The Reluctant Radical, Schlosberg’s award-winning short Backyard, and to discuss the essential protection that the First Amendment provides for documentary filmmakers.

In introducing the guests of honor, Dawn Smallman, director of The Portland EcoFilm Festival, said, “If they could arrest Lindsey and Deia, they can arrest pretty much every filmmaker we show here at the EcoFilm Festival. This is a huge chilling thing if you work in media, if you work in film and if you’re taking on big issues like climate change and the big corporations.”

When asked what brought the filmmakers together, Schlosberg, producer of Josh Fox’s How to Let Go of the World and Love All the Things Climate Can’t Change, said, “Jail. Lindsey and I had never experienced anything like that: being arrested for doing our jobs, charged with felonies for doing our jobs. So we got in touch, discussed legal strategy, confided in each other and realized we were on the same page about a lot of things.” After Grayzel sent her a few scenes from The Reluctant Radical, Schlosberg said she “was struck by how powerful it is” and signed on as co-producer.

Regarding the prosecutor’s attempt to define “press,” Pence explained the protections granted under the first amendment:

The most important thing about the freedom of speech and of the press is that the Constitution simply and categorically prohibits the government from limiting the topic at all: “Congress shall make no law . . . abridging the freedom of speech, or of the press . . .” This simple language precludes any attempt to limit the definition of what constitutes “speech” or who constitutes “press.” Thus, these terms, and the protections associated with them, are necessarily entitled to the broadest possible interpretation.

The second thing to understand is that the freedoms of speech and of the press are inextricably linked to one another, by both the text of the Constitution and by practical necessity: an idea is powerless to affect change when it is whispered alone into the darkness; press is powerless to affect change when it lacks substance. It is at the juncture of speech and press where the promise of the first amendment is found, a place as diverse as the newspaper editorial room, the sidewalk soapbox, and the social media mobile phone app. Thus, we are all members of the “press” protected by the Constitution, and anyone who wants to exercise the freedom of speech must be willing to fight for the freedom of press.

Following the event, Grayzel shared tips for other filmmakers who plan to film protests and hope to avoid landing themselves in jail. She recommended CMSI’s report “Dangerous Documentaries: Reducing Risk when Telling Truth to Power.”  Though, of course, filmmakers need to adjust to the specific circumstances they are anticipating, Grayzel developed the following general best practices for filming protests:

1. Maintain separation of actions between yourself documenting and your subjects protesting. Do not help protests with logistics, help facilitate their actions, give suggestions, etc. Be an observer, not a participant. Avoid sharing transportation with your subjects to the protest site.

2. Identify yourself as media to law enforcement in the field. If practical, wear an identifying media badge, outfit your gear with the name of your film/company/news organization, etc. Have identifying business cards with your gear. Have an internet trail documenting your work on the project, and colleagues who could testify on your behalf that they were aware of your work on the subject.

3. If your camera allows for recording on two cards simultaneously, use it. If things look they are going awry, hand off one of the cards to someone else who is trustworthy and won’t be arrested, or hide it somewhere you can come back and retrieve it later.

4. Plan ahead. If there is reason to believe you might be arrested, arrange ahead of time for someone to bail you out, and an attorney who is licensed in the state you are filming in.

5. Don’t be intimidated to do your job! You have a right to film on public property. If the police tell you to move, you need to move, but don’t move before you are told you have to. Often, they won’t tell you to move and then you have a better shot. Heck, the police officer arresting Ken at the Exxon station was downright excited at the prospect of seeing himself on YouTube.

6. Get permission. Make sure the people who are protesting want you to be filming them. If it’s a public protest, I think we can assume this to be the case, but in other scenarios make sure you have permission from the subjects. Be prepared to fight subpoenas for your raw footage that could be used against your subjects. (Know the shield laws of the state you are working in.)

Meanwhile, as The Reluctant Radical wraps up post-production — and prepares to shoot Ward’s unexpected second trial (after his first ended in a mistrial) — the team has turned to Kickstarter to raise money for post-production needs including final editing, a musical score, post production sound mix, and color correction. Portland-based film composer Mark Orton (Nebraska, Box Trolls) has already signed on to do the score.

Find out more about The Reluctant Radical here.