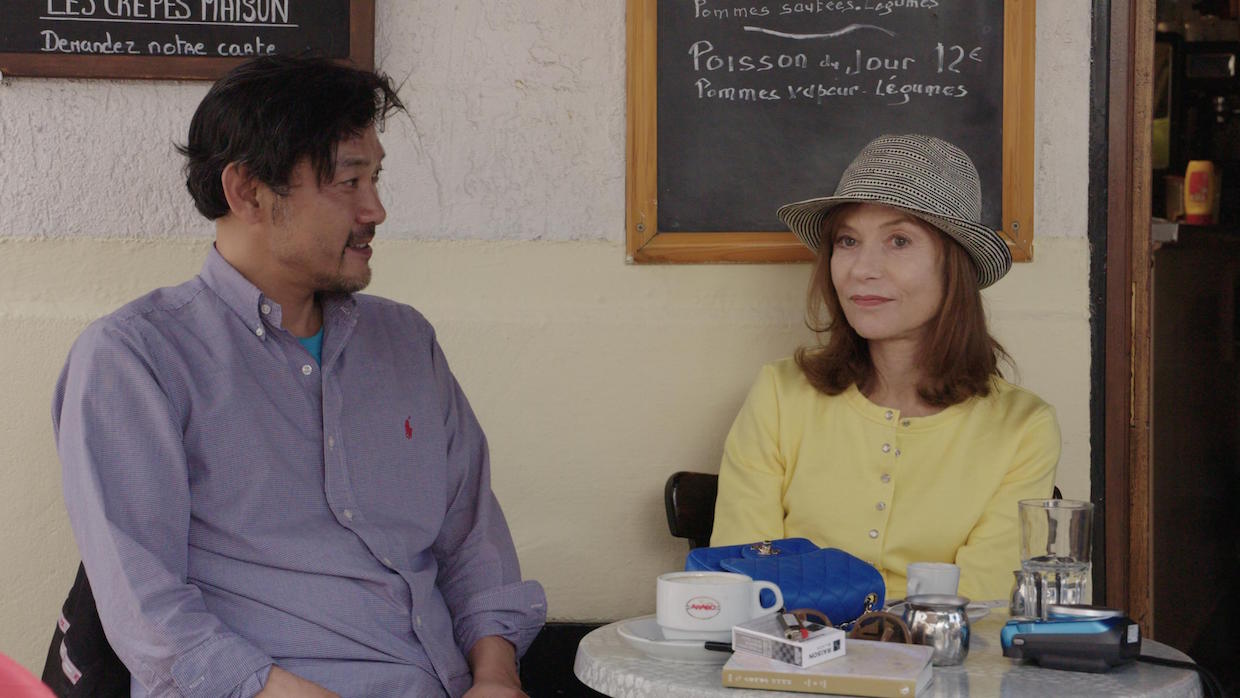 At some point the past year, Rive Gauche icon Agnès Varda and French photographer JR went on a road trip through rural France documenting whatever locals they encountered and, lucky for us, decided to make a movie about it. The main activity of their excursion involved producing pieces for JR’s ongoing Inside Out project, wherein he takes portraits of the subjects he happens upon (or lets them enter into his van-cum-photobooth to capture their own images), prints them out at a scale somewhere between life-size and mammoth, and then pastes the images onto a building or transportation vessel that is meaningful to the respective subject. The work itself is sweet and accessible, and those familiar with Varda’s spry and humanist spirit wouldn’t be surprised by her attraction to his endeavor.

Faces Places plays like something of a redux for Varda’s documentary masterpiece The Gleaners and I (2000), whimsically chronicling their journey and never missing an opportunity to turn its gaze inward. Essentially travelogue and diary, the film is exceedingly democratic even by Varda’s standards, generously accommodating to any tangent thought, detail, or passerby, leaving enough space for its makers to openly challenge and analyze their own impulses. Among the charms and anecdotes, Varda’s ruminations on the nature and pleasures of photography — the way the ephemerality of a print mimics that of our bodies; the uncanny sensations of seeing one’s own image, still and performed; how our portrait has the opportunity to “see” things and places in the world that we never will — are especially moving, and always less simple and quaint than they may sound off the tongue. Delighting in graphic matches and threads of thoughts, Varda’s editing participates in an almost Surrealist collaboration with chance, her free-form inquiries developing with a kind of daisy chain logic wherein she fumbles toward accepting the inevitable finality of her life — that moment when she will become, as we all will, an (exquisite) corpse. Never approaching anything minutely morose, this is a movie that revels gleefully in the fact that we get to share our existence with other things and beings, and of the absurdity that we are ontologically distinct from these re-presentations of us that we call photographs — free to defy whatever expectations our past selves may try to hold us to.

Hong Sang-soo’s Claire’s Camera is likewise preoccupied with photography’s rejuvenating capacities, meandering through its loosely-tuned thematic arena with a comparable spring in its step. Set at the Cannes Film Festival itself, where it was filmed last year, the movie is sketchy, barely rehearsed, and bares many markings of a briskly assembled lark. The narrative — once again explicitly autobiographical — concerns recently-fired sales agent Manhee (embodied by Hong’s real-life girlfriend Kim Minhee), who was apparently getting too romantically close to Director So Wansoo (Hong doppelganger Jung Jinyoung) for the company head’s comfort. By coincidence, So and Manhee both independently befriend Claire (Isabelle Huppert) — a Parisian teacher and amateur poet/photographer named visiting Cannes for her first time (har har) — which allows for a number of endearingly stilted get-to-know-you sequences. The actors are clearly either ill-prepared for the shoot (a small crime, considering the circumstances) or making stuff up as they go along, which means a lot of the fun of watching is in catching the logistics of its slipshod production values bleeding in through the cracks.

Holding it all together is a conceit involving Claire’s mini insta-film camera, which she uses to document virtually every major and minor character in her social vicinity. Her personal theory is that the taking of a photograph instantly changes the person in the image; the flash bulb pops, the emulsion fades into view and everything is new again. Claire isn’t so much a mystic as a pragmatist, though, expressing her belief in studying the past — “very slowly” — in order to prompt change in her life. The photograph functions as a document of her self at a given moment in time, with all the truth of her situation in focus. The analogy that Hong’s followers can intuit here is with Hong’s increasingly prolific filmmaking practice — each film an impression of his life at a given point — but that makes it sound more deliberate and specific than it actually is. This is a film of moments and mannerisms, and as with practically all late Hong, it works as an intermezzo — the connective tissue between the last Hong and the next one, always already in the can.

And speaking of moments, Ruben Östlund’s bombastic new movie, The Square, is composed of practically nothing but, though it tries very hard to unify its myriad set pieces within a sententious critique of class barriers and unchecked privilege. Working through two parallel narratives — one involving a Swedish contemporary art museum’s efforts to create a viral campaign to advertise its latest acquisition, a relational aesthetics experience called “The Square,” and the museum curator’s efforts to retrieve some belongings he lost in a pickpocketing incident — the film only really works when it’s funny, though it’s rarely as funny as it thinks it is. Its shots at contemporary art are mostly clichéd (yes, artspeak is convoluted and pretentious) and facile (sure, if you put basically anything in an art gallery, it qualifies as art), and the inclusion of Östlund’s now-characteristic theme — performed civility as essentially at odds with our primal survival instincts — feels perfunctory and dis-integrated. Indeed, the humor only really lands when it’s doing something cute with ambient sound or off-screen space (though one of two great scenes with Elizabeth Moss, who appears in a supporting roll, feels more like Apatow than anything else). The frame is always palpable and intrusive in Östlund’s cinema, closing us off from the spatial contexts that might alleviate a given scenario’s tension, and this compositional approach fits nicely in a movie about featuring art piece that is a literal square boundary. Elsewhere, another conceptual piece in the museum — a simple white neon text reading “YOU HAVE NOTHING” — is also played for laughs, while a lecture is thrown into chaos by an attendee with Tourette’s having a fit. I know Östlund likes to push buttons, but come on.