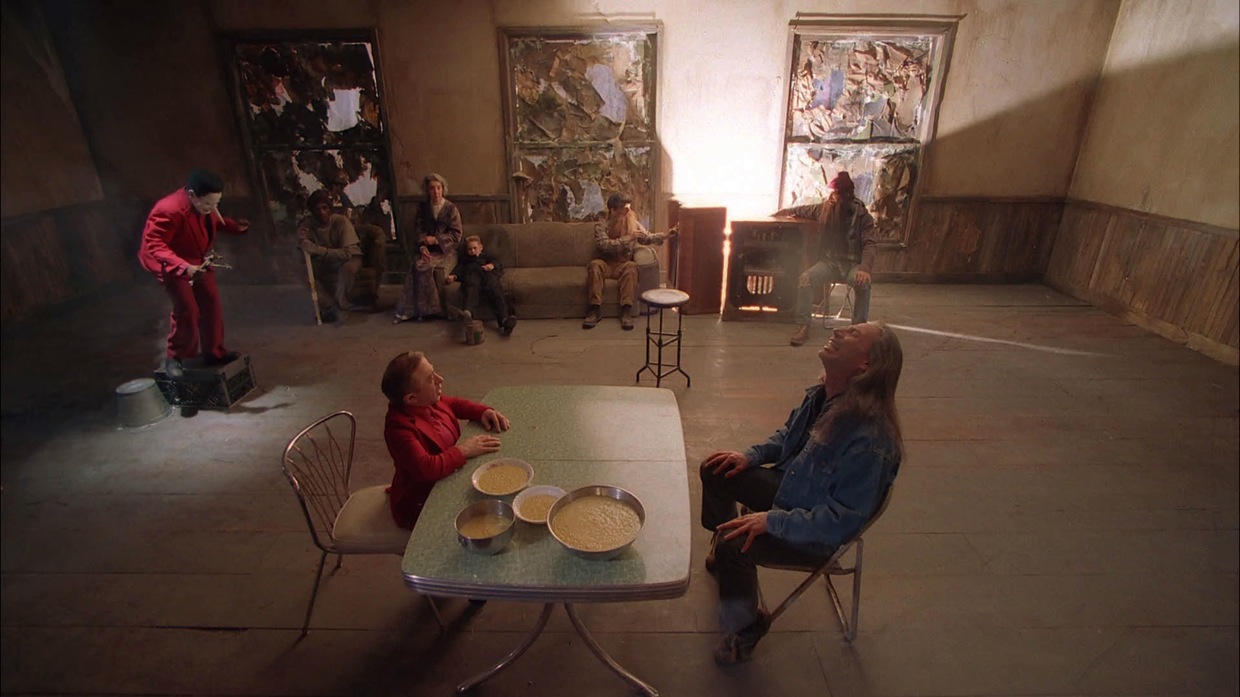 by Soheil Rezayazdi
in Filmmaking
on Jun 5, 2017

Warning: If you haven’t seen both seasons of  Twin Peaks, Fire Walk With Me and the first five episodes of Twin Peaks: The Return – turn around.

David Lynch warned us. Weeks before the revival of his surrealist soap opera, Variety reported that Fire Walk With Me would be “very important” to understanding Twin Peaks: The Return. Five episodes in, it’s clear Lynch wasn’t kidding. Even fans of the original series who plowed through the maligned second season – overcoming Confederate flags and pine weasels – have found themselves baffled by references to Phillip Jeffries, the Blue Rose, or the Owl Cave Ring. Fire Walk With Me, we’ve since learned, isn’t just suggested viewing to understand the 18-episode revival; it’s required. Perhaps it wasn’t wise, from a commercial standpoint, to hinge a massively marketed TV series on a divisive, 25-year-old film. But here we are.

Far less seen than the 1992 prequel is Twin Peaks: The Missing Pieces, a feature-length collection of extended and deleted scenes from Fire Walk With Me. To use an imperfect metric, The Missing Pieces has just 2,200 ratings on IMDb to Fire Walk With Me’s 62,000. Lynch edited and directed The Missing Pieces, which premiered in Los Angeles in 2014 and now lives on the “Twin Peaks: The Entire Mystery” box set. The “film” (for lack of a better phrase) flows like a long-lost, slightly disjointed episode of Twin Peaks, complete with Angelo Badalamenti score and Lynchian sound design. They’re not, in other words, the rough DVD extras you might imagine when you hear the phrase “deleted scenes.” This is a polished work released by Lynch just one year prior to principal photography on the new series began. The 30-odd scenes here don’t tell a story so much as render Fire Walk With Me – and, now, Twin Peaks: The Return – more coherent. They soften Lynch’s post-ABC Twin Peaks work and provide pleasures all their own.

Twin Peaks can be an exhausting place to get lost. It’s all so very complicated, this universe of time loops and doppelgangers, demonic possessions and goofy imposters, reboots and prequels. Even the goddamn deleted scenes are important. Viewers who find themselves this deep in the muck may as well wade a few feet further. Below, I outline five reasons why the deleted scenes of The Missing Pieces are worth your time.

In 2017, the prospect of more David Bowie should sell itself. Bowie appears in Fire Walk With Me as Phillip Jeffries, an FBI agent who returns after a years-long exile. Bowie stumbles childlike into a bureau office and begins to mutter about someone named Judy (a character never referenced again in the Twin Peaks canon). The film then cuts to a nightmarish gathering of Twin Peaks’ dark forces: Bob, The Man from Another Place, and Mrs. Tremond and her grandson, among others. Bowie’s dialogue continues as voiceover, though it’s nearly indecipherable amidst Bob’s cackles and Lynch’s staticky sound design. Bowie then vanishes from the FBI office, without fanfare, after little more than a minute on screen. The scene is so choppy and short that most viewers can’t get over Bowie’s jarring southern accent before he disappears forever.

Perhaps the most incoherent passage in all of Fire Walk With Me, the Bowie sequence has come to hold real significance in the new episodes of Twin Peaks. We’ve heard repeated references to Agent Jeffries in these first five episodes; evil Cooper even claims to have spent the past 25 years working undercover with him. The Missing Pieces offers an extended version of Bowie’s scene at the FBI offices and two deleted scenes of him in Argentina (which seems germane to last night’s cutaway to Buenos Aires). These scenes run more than four minutes, and together they offer a far more intelligible portrait of this character than what’s seen in Fire Walk With Me. Twenty-seven years after they were cut for runtime considerations, these scenes should surely be seen by those invested in the new series.

Twin Peaks is a universe of signs and symbols whose meanings remain just out of reach. From black coffee to creamy garmonbozia, the emblems of this world tantalize both its inhabitants and its obsessive viewers alike. The Missing Pieces provides a generous dose of the figures and objects that’ve come to define much of this world. One scene – the aforementioned gathering of Black Lodge favorites – runs a full three minutes longer in Pieces. Lynch boiled this and Bowie’s scenes down in Fire Walk With Me into a muddled, surrealist soup. Here, we see them as standalone sequences, freed of the dictates of a theatrical run-time.

This scene takes place “above a convenience store,” a reference to a dream Dale Cooper had in episode two of the original series. Led by The Man from Another Place, the characters discuss garmonbozia, the Owl Ring, and electricity, all of which have factored into the first five episodes of The Return. It seems likely that this location, which appears adjacent or in some way connected to the Black Lodge, will appear again in the new series. In Fire Walk With Me, Lynch smothers the scene with Bowie’s histrionic voiceover. Here, it spills in every which direction, unhurried, for nearly five minutes. The result is excessive, and essential.

David Lynch doesn’t seem to much care what made it into Fire Walk With Me and what didn’t. To him, it’s all canon. Consider the line “Is it future, or is it past?” from the second episode of The Return. Mike (a.k.a. The One-Armed Man) poses this question to Cooper in the Black Lodge. Twenty-five years ago, The Man from Another Place said these exact words to Cooper, also in the Black Lodge. You wouldn’t know this, though, unless you’ve seen The Missing Pieces; the exchange was cut from the final film.

Several writers have cited the line as a neat summation of the Twin Peaks phenomenon. Here’s a show, after all, that deals in time loops and is now toying with viewers just as it did 27 years ago. So leave it to Lynch to make a callback to a deleted scene from a 25-year-old film that many viewers disliked. With 14 episodes to go, it seems very possible The Return will drop more references like this one to The Missing Pieces.

Twin Peaks‘ second season ended on a truly unsettling note: the birth of evil Dale Cooper. Lynch, we learn in The Missing Pieces, wrote Fire Walk With Me as not just as a prequel to Twin Peaks but as a quasi-sequel as well. In this collection, we find two scenes that take place after the events of the show’s cancellation.

Chief among them is an extension of the “How’s Annie?” gut-shot that closed the show. Here, we get our first significant dose of evil Cooper, who has dominated much of the new series thus far. The current Cooper bears little resemblance – physical or otherwise – to the affable mystic on ABC. The evil Cooper glimpsed in The Missing Pieces, however, feels like an eerie continuation of the character we loved in 1990. This evil Coop makes goofy puns and delivers non-sequiturs about brushing his teeth (even as blood drips down his face). It’s the same Coop, just…off. This small scene closes The Missing Pieces, and it serves as a bridge between the Cooper we loved on basic cable and the Cooper(s) that confound us now on Showtime.

The new series, like Fire Walk With Me, ditches much of the melodramatic charm that hooked audiences on Twin Peaks in the first place. The Return doesn’t bask in the love triangles or all-wood-everything interiors of the Pacific Northwest. It instead delves into a kind of brutal abstraction. Its characters are laconic, its pace languid, its settings spare. The Return, in short, has more in common with Lynch’s later-period work (and Eraserhead) than it does his time on ABC.

For those hungry for the restorative powers of cherry pie and small-town romance, The Missing Pieces serves up such lighter fare in spades. These are the little moments that stray from the aggressive death march that is Fire Walk With Me. We drop in on Big Ed and Norma, drunk and amorous in a parked pickup truck. We see the Palmer family erupt in laughter as they practice Norwegian at the dinner table. We visit Lucy as she grows mystified by everyday phone technology (a joke continued in the new series). Fire Walk With Me’s feature run-time couldn’t accommodate such tangents, and The Return has a singular aesthetic MO all its own. Thirteen episodes remain, but for now it seems like The Missing Pieces may be your last, best hope for the good-natured camp of the original series.