On Loving — and Panning — Shows in Television’s Renaissance Moment: A Report from the Split Screens Festival 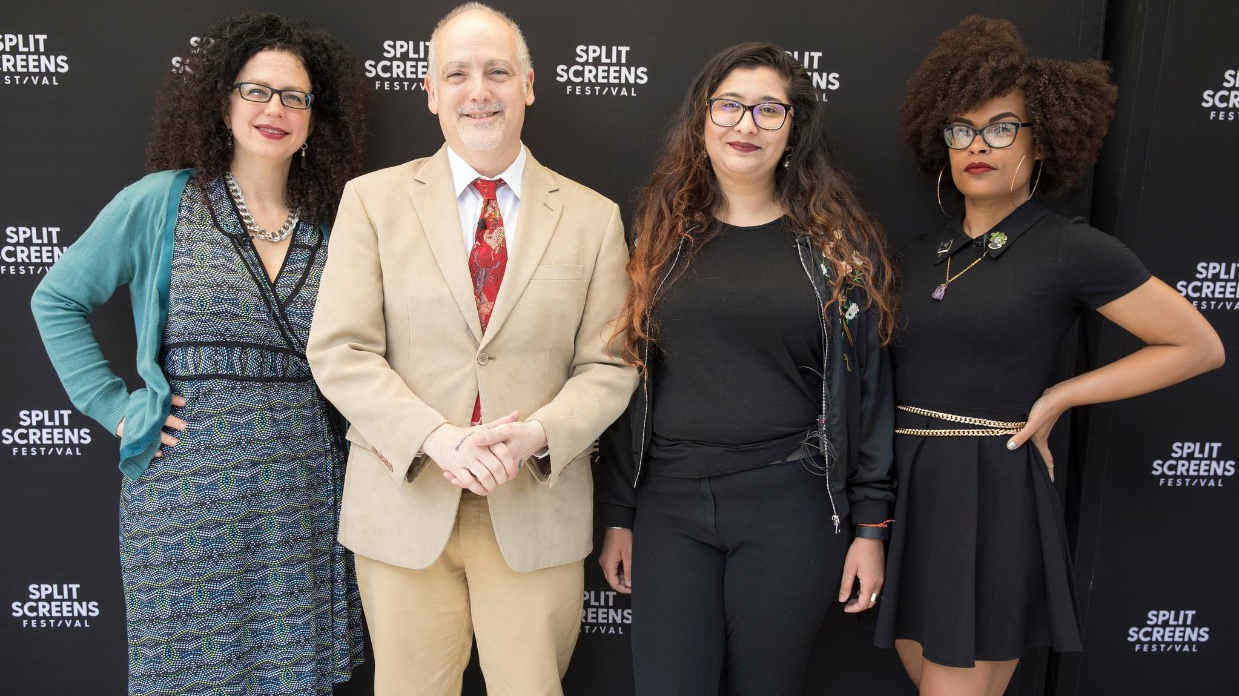 A TV series is like a conversation — or, when a show turns awful, a bad relationship. That was just one observation from a spirited panel, “The Evolution of TV Criticism,” held at Split Screens, the new New York festival that celebrates and explores television in its current “renaissance moment.” Speaking were four well-read critics who represent two generations of TV writers.

Matt Zoller Seitz, of New York Magazine and RogertEbert.com (and also the festival’s head programmer), began by saying that he got his start as a critic in 1991 with his first paid byline in the Dallas Olbserver. His debut piece of television criticism wasn’t until 1997, though, in the Newark Star Ledger. At that time, he said, television criticism was pretty much “the grid that showed you what was on tonight.” But he’d read all sorts of criticism as a kid, and even then knew that the ways critics were writing about film, music and books felt fundamentally different than the way they should write about engaging with television.

Emily Nussbaum of The New Yorker agreed, saying, “[Television] was written about as pop culture detritus.” But now, 20 years later, she noted, it’s generally treated as a much more significant thing. The turning point for her as a critic was Buffy the Vampire Slayer. She’d been critically engaging with television before that, but only in the form of anonymous online writing. It wasn’t until the late ’90s, when she found herself arguing with people about Buffy at cocktail parties, that she decided to turn her online posting into professional critical work.

Sonia Saraiya, who writes for Variety and is a little younger, grew up in a slightly different ecosystem. She would read television criticism in her hometown newspaper, while also receiving the message that she shouldn’t watch the tube because it would rot her brain. But she also had the internet. She was on West Wing forums, which she described as that era’s “film Twitter,” when she was only 13 years old.

Growing up, Angelica Jade Bastién, a Vulture and The Atlantic contributor, wasn’t reading reviews at all. She was writing fan fiction, which Saraiya noted is actually quite connected to criticism. Nussbaum agreed, saying that TV is unique in its relationship with the audience as opposed to other art forms: “There’s the intimacy of inviting it into your home — like a vampire.”

The X-Files was a big one for Seitz, along with Twin Peaks, which he obsessed over. According to Saraiya, The X-Files was a flashpoint for internet fandom. She pointed out that everyone on The West Wing forum came from X-Files and Buffy, saying, “They would talk about TV as a whole, talk about how things connect to each other.”

Things started booming in the ’90s, said Nussbaum. When she started at The New Yorker, she went back into their archive and read their first two decades of TV criticism and was fascinated by this early writing about a medium at a time when no one really knew what it did or could do.

But television certainly had its detractors in the critical community. Seitz mentioned George W.S. Trow’s famous 1980 essay, “Within the Context of No-Context,” in which Trow called the medium “bewitching” and stated that “no good has come of it” — all written with a scathing passion. The opening paragraph, to give an idea, reads as follows:

While this view of television as low, childish and trivial isn’t shared widely today, plenty of critics write quite unfavorably about series that don’t reach the medium’s potential. Nussbaum shared an anecdote about Dawson’s Wrath, an online newsletter started and sent out faithfully by a guy who hated Dawson’s Creek, but couldn’t stop watching.

(This reminded me of the relationship I used to have with Aaron Sorkin’s The Newsroom. I didn’t write a newsletter, I just hate-tweeted each episode as the depictions of women became increasingly backward and bizarre. At one point, a somewhat unhappy-seeming stranger asked me why I didn’t just stop watching, and my reply was simple: “Sport.” It was fun. It was also a way of expressing my discomfort with a major network show that was entertaining but really should have known better. But it wasn’t criticism — I was just an audience member interacting semi-publicly with a show that would never notice how I felt about it — though, thankfully, many critics also noted the same point.)

This interplay between showrunner and audience — and showrunner and critic — was a big topic at the panel. That symbiotic relationship is, Saraiya noted, a key difference between television and film. Shows push creative, thematic and formal envelopes, audiences respond enthusiastically, or critically, and the cycle begins again, unlike film, where the work is fixed upon release and creators effectively retreat from dialogue.

But the episodic nature of television presents challenges for critics too.

Saraiya talked about the difficulty of getting little pieces of a story one hour per week, and not knowing whether it’s going to come together in the end. The necessity of writing weekly is, Nussbaum pointed out, simply the nature of the beast. Audiences demand more coverage than simply a review once a season is over.

It was Seitz who said a series is a conversation, or, describing a show like The Walking Dead – which he hates – a bad relationship: “You watch it, and it’s like, ‘It’s good,’ and then it starts to go bad and you’re like, ‘I got to get out of this,’ and then it shows up on your doorstep with flowers and then after a while you start to question why you invited it back in.”

As he has written about, Seitz — or rather his writing about Damon Lindelof’s show, The Leftovers, along with more personal writing about the death of his wife — ended up inspiring an episode of the third and final season of that series. At the panel, Seitz didn’t seem completely comfortable with that relationship, saying that he’d have difficulty putting shows with any kind of personal connection on a “top ten” list, even if they were deserving. He says he doesn’t even like to get thanked for positive reviews.

Of course, showrunners are not always so enamored of a writer’s criticism. Seitz has been on that end as well, receiving feedback from people asking why he didn’t like their work when they poured their heart into it. Bastién divulged that the showrunner on Luke Cage actually contacted her to complain about the way she’d reviewed the show. She felt that he had an expectation that she, as woman of color, would automatically like anything that’s inclusive.

Nussbaum said she’s grateful she doesn’t live in L.A. because she doesn’t run into the people whose work she’s critiquing at dinner parties. But, she added, “Twitter is a big cocktail party.”

Bastién, who lives in Chicago, said she has more distance from showrunners and industry alike, so when she needs to be fully outside of that conversation, she just turns off Twitter.

“Social media does create complicated blurry intimacy,” said Nussbaum. But it can also just create the appearance of intimacy. When she wrote about the first season of Girls, she said that people took it as if she was a personal friend of Lena Dunham. She’s not.

Saraiya pointed out that criticism is part of journalism, and that showrunners are among journalists’s sources. She said the relationship needs to remain a professional one and that it’s important to retain a level of integrity. She added that the people who make television are very handsomely compensated, so she doesn’t feel at all bad about writing a negative review of a show. A bad review won’t destroy someone’s livelihood or career, and, she added, “This person is paid well to produce a product that millions of people see, so we should hold them to a high standard.”

Nussbaum stated that she believes that it’s possible to have integrity and boundaries while still acknowledging her own enormous love and respect for the difficult act of making a TV show. She also suggested that the way people judge shows has itself been part of a false hierarchy. She noted that at first people praised shows by comparing them to movies or books, but those are just different forms. TV came out of radio and theater, and historically she said, like those forms, great TV shows will sometimes change based on audience reaction: sometimes out of anger, sometimes out of recognition of what the audience liked.

For all of these critics, the vast volume of television produced today is a huge challenge. There’s simply no way to cover it all. For someone like Saraiya, who is one of two television critics at Variety, it’s particularly overwhelming. The publication has a mandate to cover everything: that’s 464 new scripted shows this year plus coverage on top if it’s a big show.

Nussbaum said she feels like we’ve hit “peak TV,” and that when she saw a statistical chart showing the growth of TV shows and new platforms, she felt a sense of relief because she realized that it’d be physically impossible to watch everything. Saraiya agreed, saying, “It’s exciting that people take TV as seriously as they do, but I wonder if we’re focusing a little too much on quantity.”

Concluding, Nussbaum, who has a Masters in Poetry, and used to review the art form for the New York Times Book Review, said while it sometimes felt cruel to pan a poetry collection that few will read and that’s written by one person for almost no compensation, television is the polar opposite. It’s a collaborative medium that’s looked down upon and made for mass market consumption. In fact, she posited that panning TV in a meaningful way is a way of praising it overall: “It’s saying its deserving of serious critique, and if you can’t pan a medium, you can’t critique it.”

Split Screens runs through June 8 at the IFC Center.