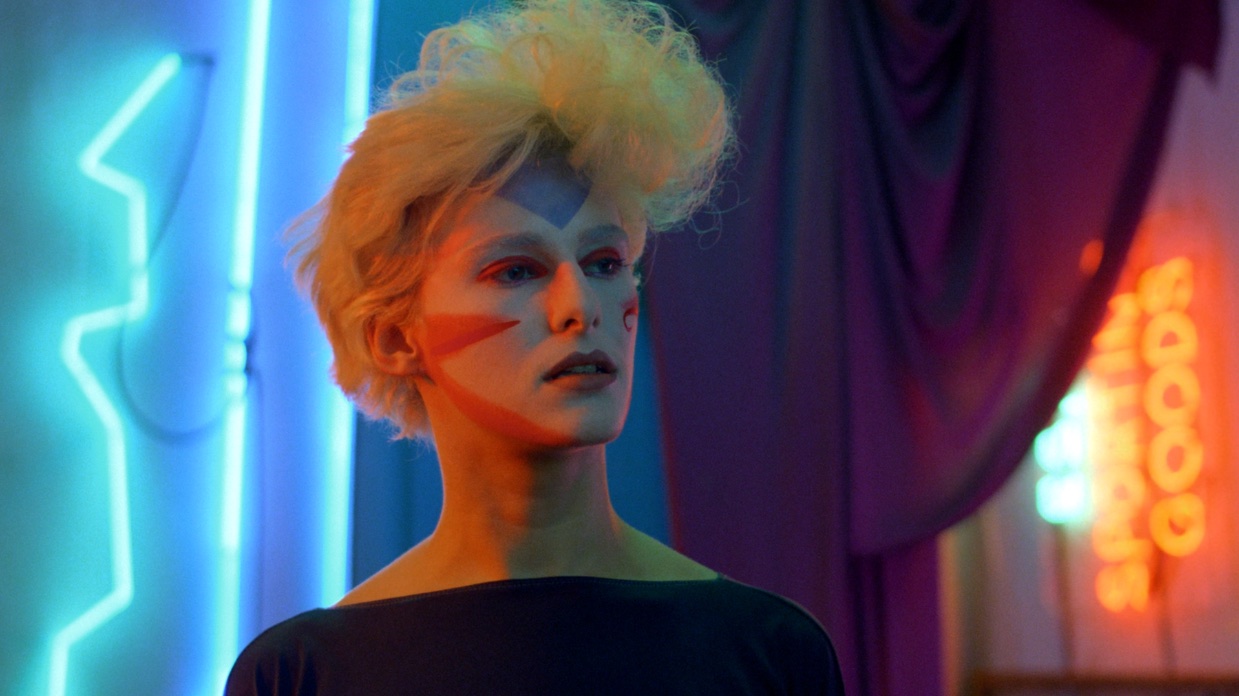 For the past three decades, midnight movie staple Liquid Sky could only be seen during infrequent 35mm screenings and on out-of-print VHS and DVD editions. If a film fan actually saw Slava Tsukerman’s science fiction spectacle about downtown New York City residents coming into conflict with dopamine-devouring aliens, their experience of the film — known for its striking neon images and “electronic circus” soundtrack — was marred by aging film stock or subpar transfer. Enjoying the classic at the full audio-visual potency of its 1982 release was impossible with the options available.

“Liquid Sky was kind of in the same world as El Topo or Reefer Madness or Night of the Living Dead… Liquid Sky was much harder to see, and it had this reputation as this really beautiful, colorful film,” said Vinegar Syndrome Director of Acquisitions Joe Rubin during a recent phone conversation. “The VHS is — as expected for an ’80s VHS — drab and dark. Obviously it’s incorrectly framed and all that, but for a movie that’s all about color and contrast and shadow, watching it be a murky mess or dull and flat kills everything about the film.”

In collaboration with Tsukerman, Vinegar Syndrome helped to return the cult classic to its former glory with a 4K restoration. Before a mass market release in 2018, the restoration will be available to the public for the first time in a dayglo ink package designed by Derek Gabryszak and limited to 3,000 copies starting November 24.

Filmmaker and Liquid Sky superfan Shade Rupe introduced the Vinegar Syndrome crew to Tsukerman in an attempt to accomplish something once thought impossible: restoring and distributing the film for a new generation to discover.

“Liquid Sky had this reputation that it would never [be rereleased]. There was this notion that the rights were tied up or it was just going to be impossible to work out a deal or whatever it may be,” Rubin remembered.

Tsukerman had many suitors for restoring the film over the years, but he never clicked with the companies approaching him.

“I wasn’t very happy about making a deal with a big distribution company because they always want to control all of the markets and they all want to have a very long term for like 10 years,” the director said. “Liquid Sky is a film very dear to my heart and very important for me.”

“Together [Vinegar Syndrome’s Director of Business Development Ralph Stevens] and I courted Slava for nearly two years… It was almost surreal that he accepted our offer,” Rubin said. “It was like buying a house almost. You’re up against who knows how many other people who might have more money than you, might have bigger names than you, might be bringing more to the table depending on what you’re looking for. But somehow we managed to convince him. I say this sincerely: we hopefully managed to show him that we really cared about the film and wanted to give it the best possible presentation.”

While Vinegar Syndrome’s meticulous dedication to conserving the films in their care gave them the means necessary to provide this best possible presentation, Tsukerman furnished them with excellent raw material. All of the company’s restorations start with scanning a 35mm negative to 4K on an ARRISCAN to get the purest image possible. Tsukerman used a duplicate of his negative in the form of a CRI (color reversal intermediary) to run prints, an uncommon practice. Since a negative used to make prints typically degrades with each print run, the untouched original offered what Rubin called, “one of the greater negatives we’ve worked with recently.”

Director of Photography Yuri Neyman joined forces with Vinegar Syndrome to make the film’s vibrant colors pop once again. As 20-something model Margaret (Anne Carlisle, who co-wrote the film) strikes back against the abuse hurled at her by the downtown fashion scene of early 1980s New York City, she moves through sets punctuated by splashes of deep fuchsia, vivid lime green, and stunning sky blue. Scenes at the new wave nightclub where Margaret participates in avant-garde fashion shows and her girlfriend Adrian (Paula E. Sheppard, who is hands-down the best part of the film) exhibits her bizarre performance art also stun like never before, with bright flashes of neon piercing darkness in syncopated explosions of warm color. As someone who has only seen the film in deteriorating 35mm prints, I can honestly say that the newfound crispness of the restoration’s visuals makes Liquid Sky feel like another movie.

Just as the duplicate negative was a boon to the restoration’s visuals, Liquid Sky’s distinctive electronic soundtrack — composed on a Fairlight CMI digital synthesizer by Tsukerman in collaboration with Brenda Hutchinson and Clive Smith — likewise received a boost from the director’s fastidious archive-keeping. Tsukerman had the soundtrack’s magnetic tracks, which offered more range and depth than the typically used optical track negative.

Any apparent novelties in the restoration’s visuals or sound are meant to hew more closely to the images of Liquid Sky’s initial release. However, due to transfer errors in the home video releases that helped filmgoers fall in love with their favorite films, fans can sometimes perceive a restoration’s fidelity as error.

“What people have seen isn’t actually the way [a film] was always supposed to be seen and heard,” Rubin said. “In the same way there are going to be people who will complain about the changes that could be inflicted on a film if it’s not restored properly, there are also people who are going to look back at the inferior quality versions that they’re familiar with and say, ‘Well this is what I’m accustomed to. Why does it not look that way anymore?’”

Despite the possibility of a few rabid fans pining for the idiosyncrasies of their first viewings, Liquid Sky is finally poised to receive wider recognition for its notable impact on American visual culture with image and sound fully restored to the majesty that audiences experienced in 1982. Make-up artist Marcel Fiévé’s design for Margaret’s look and the colorful, angular costumes created by Marina Levikova-Neyman are cited as a sartorial influence on contemporary pop-stars like Karen O, Kesha, Lady Gaga, and Sia. As the film circulates among a new generation of cinephiles, Liquid Sky’s circle of visual influence has the potential to expand, bolstered by the fact that audiences will get their first clear look at the film in over 30 years.