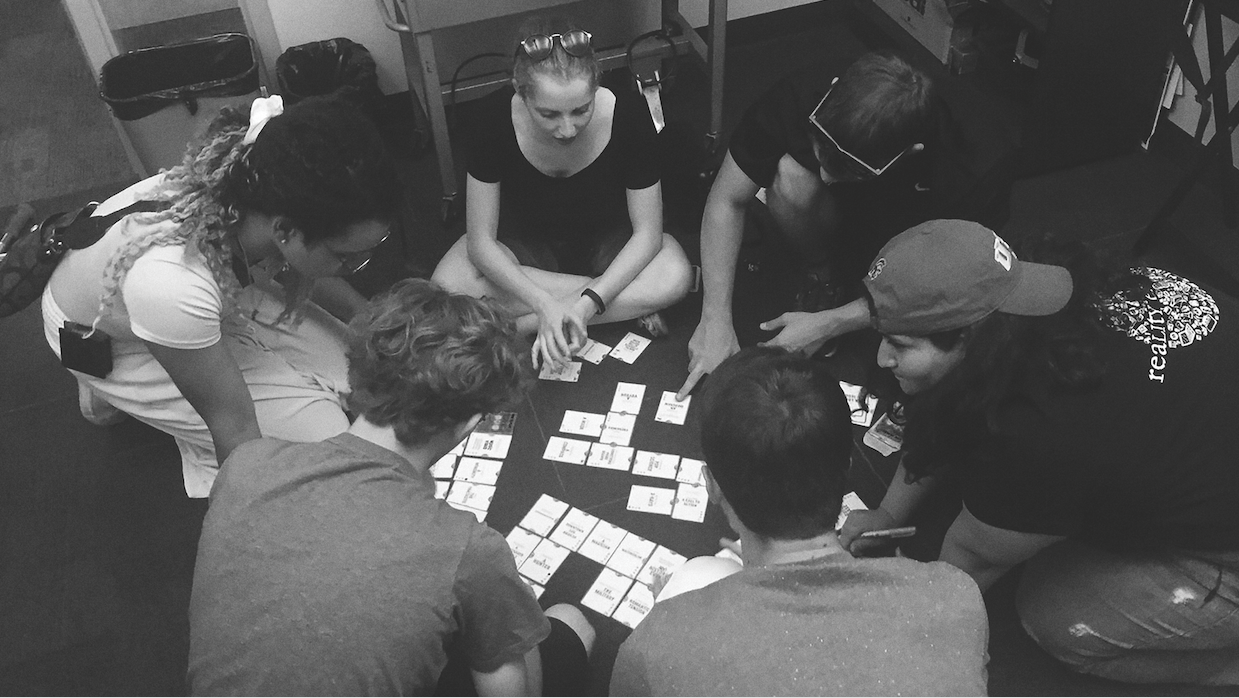 This is a secret: For the past seven years, each fall semester, the School of Cinematic Arts at the University of Southern California (where I work) has hosted an alternate reality game called Reality Ends Here for the incoming cohort of freshmen students. It is completely unacknowledged by the faculty; participating students get no credit for playing; no school equipment can be used to make projects; and to play usually means to collaborate, not hone your own individual career trajectory.

And here’s another secret: The game may be home to some of the best teaching and learning in the entire school.

The game, launched in fall 2011 and reinvented in some way each year, was designed to encourage students to collaborate and to step outside of their own, narrowly defined career path in order to get acquainted with the rest of the school. It was also intended to jumpstart the creative process, launching students immediately into collaborative projects and helping generate a shared identity or disposition, one based explicitly on creativity.

Originally designed by Jeff Watson, then a graduate student in the interdisciplinary Media Arts + Practice Ph.D. program at USC, the game was based on a deck of more than 300 cards. On one side of each card was information about the history of cinema and game design, facts about the School of Cinematic Arts or historically significant films, games, concepts and tools that every student in the school should know. The opposite side of each card featured a project to create or conditions constraining the project. For example, a card may read “comic book,” indicating that the project should be a comic book. Or, it may read “a moral dilemma,” indicating that whatever the project, it should include some sort of moral dilemma. Linking the cards using a color-coded arrow system would build a project prompt to create a comic book with a moral dilemma. The key to the project prompt is that students can continue to add condition cards, and the way to do this most effectively is to connect and collaborate with other students.

The game still uses a card deck system and still prompts both projects and serendipitous encounters with other students.

Jesse Vigil, who has run the last four iterations of the game, says that the cards are not really the heart of the game, however. “The cards serve a mechanical purpose, but the important thing about the game is that it is a conversation,” he says.

The conversation is a big one. Vigil says that this year’s game boasts approximately 60 regular players who come from each of the school’s six undergraduate programs. He also says that he has worked to avoid midsemester falloff, which was a problem in the past. “The biggest change that we’ve made to the game is that it’s grown laterally,” he explains. “We’ve added a lot of opportunities for players to engage on their own terms, so during those times when students are really busy, or have midterms, they can still participate.” These smaller projects might include animating a simple walk cycle or building a Twine interactive story, projects that are quick exercises to keep participants experimenting with diverse media forms.

While these smaller projects help sustain game participation, the game is really known for its often massive collaborative projects. “In 2015, a group of students created a 45-minute radio drama that had more than 40 people involved,” says Vigil. “They had a writers’ room, audio editors and a bunch of actors, some of whom were drawn in from other universities. It was huge!”

Another group, in 2016, created an escape room in their dorm. “In this case, a group worked together sequentially through several projects: They created a story bible, concept art and a pilot, and then the room was based on that material, all of which centered on a diverse group of college monsters.” Vigil explains that this kind of workflow is instructive for students. “It’s an immersive strategy where you build big projects with 40 or 50 people, but in small parts that might start with just two or three people.”

In past iterations of the game, winners would meet various celebrities who were associated with the school in some way. This was a strategy that also helped keep alumni involved with the school. One week early on in the game’s history, students who had earned the most points found themselves at the home of Dante Spinotti, the Academy Award–nominated cinematographer, who served hors d’oeuvres (but only after the students had bowed down in front of a poster of Federico Fellini’s 8 ½). This year, however, is different. “We’re focusing more on people who are in a position to help our students when they graduate,” says Vigil. “These are people who tend to be a bit younger, people that students can call for an internship or job when they graduate.” Vigil explains that a recent guest was Jenni Powell, who worked on lonelygirl15 and The Lizzie Bennet Diaries. “She came and hung out with the students for two hours and talked about how you make a web series,” says Vigil.

While in previous years, the game could grow very competitive, often with students dividing into two opposed teams, the game runners have worked hard to conjure a more generalized spirit of creativity, in part by deemphasizing points and winning. “It seems like every year, students have this revelation when they understand that the points don’t really matter,” explains Vigil. “They’re a good way to keep track of things, but the winners aren’t the ones with the most points.” Instead, says Vigil, the winners are the ones who’ve connected with other people in a meaningful way.

While a traditional alternate reality game would cost a fortune to run, Vigil has managed to keep costs low. He works with a small team of mostly volunteer students who, if they liked the game as participants in the fall semester, can take a class in the spring to help design the next year’s iteration. “We are running on the ethos that the game espouses, which is to focus more on creativity than cost,” he explains. “ The game runs on passion.”

Summing up the growth of the game, Vigil notes, “The biggest change I’m most proud of is that for the past four years, the most successful players of the game have all come from traditionally marginalized backgrounds in the entertainment industry.” He continues, “When we asked them about their success, they all say the game doesn’t make them feel like their backgrounds matter. The game creates a permissions structure in which they can pursue their art and get validated, and that has translated to them building confidence and the armor necessary to go fight the good fight in the industry.”