Dreams of Cinema with Apichatpong Weerasethakul at Qumra 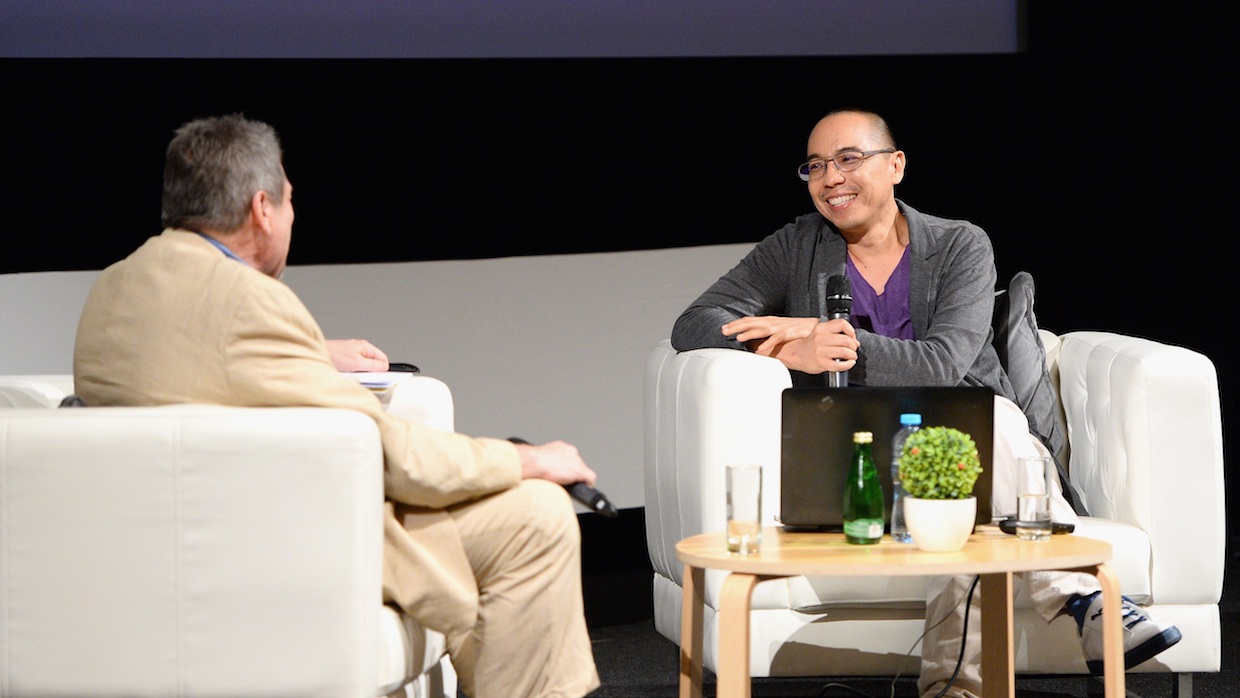 An initiative of the Doha Film Institute, Qumra is a focused event that connects Qatari and international directors who are receiving different stages of DFI-funded support with industry delegates from across the spectrum of the film world as well as a handful of heavy-hitting “Masters” in a mentor-like capacity who meet with emerging talents and engage in public conversations.

Far more than a masterclass, attendees at Qumra were treated to a personal journey through history, life and cinema with Thai filmmaker Apichatpong Weerasethakul. It opened in a standard format with Richard Peña moderating, but then Joe went solo and pulled up a slideshow on the big screen, beginning with a picture of him as a young boy and working through images of where he grew up in Khon Kaen, focusing on the unique environment of the hospital where his parents worked and how it influenced him: “This compound had a big and long lasting impact on me, all the moments of waiting…the rhythm. Everyone seemed to move in slow motion. The idea of time is very special for me and generated from this space.”

From there he guided the audience through the troubled politics of his homeland, both its dark history and tumultuous present. “Our most recent coup d’état was in May 2014 and we’re still living under military dictatorship. They monitor social media and people who criticize the military are sent to an ‘attitude adjustment camp.’ You have to sign a paper saying you won’t be politically active. It’s happened to my friends.” A scene was removed from Cemetery of Splendor from fear of its sensitivity and the climate has forced him to make his next feature outside of Thailand — a first for him. But it doesn’t mean he’s done working there. “It actually feels more urgent for me to work there and create reactions to what’s going on,” said Weerasethakul in a separate interview with Filmmaker following the masterclass, citing his current project, an installation commissioned by the Tokyo International Film Festival, as an example: “Returning to short films has always been important for me, but even more so now as a way to immediately express how I’m feeling.” Starring his longtime collaborator and actor, Jenjira Pongpas Widner, it’s another piece that revolves around sleep, a fascination for Weerasethakul since he started researching its science for Cemetery of Splendour. “I wanted to make an older style of filmmaking where we use mirrors and glass without special effects. It’s about a woman who can’t sleep because the landscape keeps changing and there’s a fire burning. In the corner we use a fake painting of the mountains and moon.”

In fact, all of his recent and current work seems be fixated on ideas relating to sleep, dreams and cinema, including a “Sleep Cinema Hotel” at IFFR this past January: “It was fully operational with amenities, a shower, fully stocked bar and breakfast with mango sticky rice.” A platform of artfully arranged beds sits next to a gigantic screen. “You spend the night and the same clip never plays twice. It’s about sleeping with the consciousness of the land and different ideas of time to synchronize with your own.” Referring to sleep as his “second love,” Weerasethakul explained how his obsession with sleep and film intersect. “There are different cycles of sleep, and they last 90 minutes. It’s like we go to the cinema because of this biological need to be in the dark and to experience a dream for that length of time, and movies evolved into this unconsciously.”

Continually connecting his own subjective experiences and those of his characters with a larger consciousness, Weerasethakul ties individual phenomena with the history of the surrounding environment, something he’ll continue to explore in Memoria, which begins shooting later this year in Colombia and stars Tilda Swinton as a woman who hears noises in her head that connect to the violence of the region. In A.W. A Portrait of Apichatpong Weerasethakul, a new mid-length documentary portrait directed by Connor Jessup released by the Criterion Collection on Filmstruck, he is heard talking about hearing a bang in his head in the morning, and mentions the bombings that took place in the ’70s and ’80s in Colombia, revealing how his method is deeply aligned with his own processing of sensory experience and memory. It was unsurprising then, to hear Weerasethakul talk about the importance of meditation for keeping his mind clear, but less so his relationship with music, “I don’t listen to music,” he said, “it’s a distraction. Everyday life is enough” — ironic considering the integral use of music in his films, but he says those all come from his friends, often musicians, sending him something. Nevertheless, his brilliant work with music and sound is now collected on METAPHORS: Selected Soundworks from the Cinema of Apichatpong Weerasethakul, available on Bandcamp from Belgian label Sub Rosa.

After walking the audience through his process and the evolution of his own work, Weerasethakul offered some refreshingly and touchingly optimistic thoughts on the future of film. “Cinema is primitive. We should congratulate ourselves that we are still in the really early point of cinema, a romantic point when the possibilities are immense. This is an exciting turning point. I believe in the future we’ll be able to share dreams by hooking up our brains, a collective sleeping that will bring more empathy from experiencing other people’s feelings. And then we will no longer need a camera or a projector.” Along those lines, Peña asked Apichatpong about working in 3D and virtual reality: “I don’t think 3D is the answer, but virtual reality is closer to that biological need of dreaming.”

In the masterclass, Apichatpong emphasized cinema as “something else” when compared to literature or other forms, a mysterious medium not intended for storytelling so much as intangible experience. I asked him to elaborate on this elusive quality: “It’s the same way you try to recall a dream and it’s gone. In filmmaking you are trying to recreate a reality but then this memory is intangible. Movie making is so tangible, it’s so touchable, but it becomes untouchable when you deal with editing and time. You see it on the timeline, on Final Cut or whatever. It’s so touchable. But it’s not. It’s always this back and forth…I don’t know.” Apichatpong’s own films seem to occupy a space between memory and fantasy, between the touchable and untouchable; part of his mastery is to embrace the mystery of cinema, as if each moment on screen captures the process of his consciousness mingling with the furthest reaches of film’s transcendental capabilities.