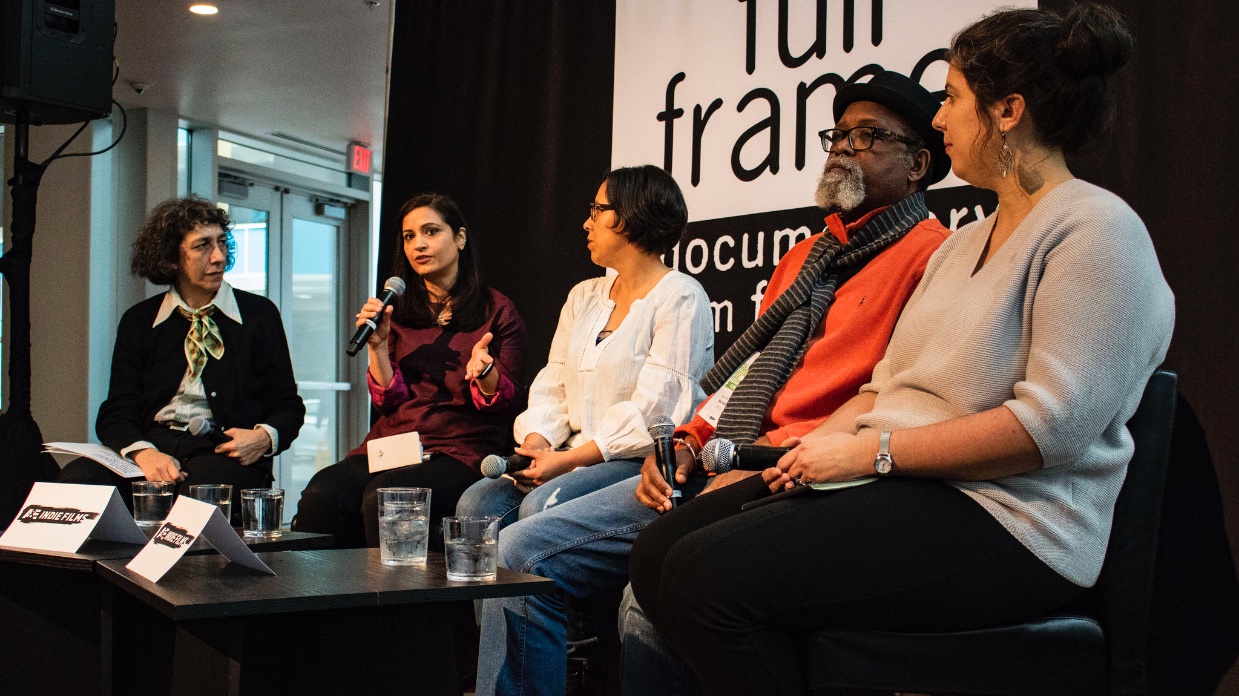 Recently, I’d been pondering why the Full Frame Documentary Film Festival always tops my must-attend U.S. doc fest list. Like few fests in the U.S. or Europe, Full Frame truly walks the walk — it’s a top tier, mainstream nonfiction festival in which the people in power are almost exclusively women. Indeed, one look at the 10-member staff page on the Full Frame website reveals just two male faces (only one of which is white). Then there are the attendees, the other ingredient that makes Full Frame truly special — as many folks of color as white. The one thing all these people, organizers and attendees, have in common — other than a passion for nonfiction cinema — is a desire to think deep. Indeed, Full Frame is one of the few fests where I’ll willingly stay for the Q&As as that random audience member stepping up to the mic is often knowledgeable enough to have served as the moderator.

Full Frame’s secret sauce may be its deceptively laidback A&E Indiefilms Speakeasy conversations, which really have to be experienced in person; the energy in the room sometimes closer to church revival than academic lecture. While I attended several this edition, once again the riveting star of the show was the #DocsSoWhite discussion. Moderated by Naomi Walker of the Southern Documentary Fund (which co-presented), #DocsSoWhite: The Gatekeepers featured the expertise of Carrie Lozano (International Documentary Association), Lauren Pabst (MacArthur Foundation), Anu Rana (Diverse Voices in Docs, Kartemquin Films) and Sam Pollard (who’d brought his latest, Maynard, to the fest).

Festival director Haj introduced this panel by way of posing some provocative queries. “Who are the funders? The programmers? The schools?” She urged us to consider these questions before rueing the fact that she’d struggled to find a festival programmer of color for the panel who didn’t work at a culturally specific film fest. The fact that minorities are so underrepresented on programming and funding teams was simply not acceptable, and it was the topic the participants were here to tackle.

After the introductions, moderator Walker clarified that she wanted to expand the theme of #DocsSoWhite to include the disabled, the lower classes and under-represented regions. (The South and the Midwest were especially on the panelists’ minds.) Pabst noted that MacArthur had made the decision to partner with other organizations to award funding specifically to avoid their own, single-point-of-view, decision-making lens. Pollard then chimed in, eager to dispense his elder statesman wisdom. Young white filmmakers approach him all the time, he said, and his advice is always the same: “You should be challenged. This is part of your responsibility. None of us should get a pass — even me!” While Pollard acknowledged that we’ve come a long way as a society (when he started out in the ’70s diversity was nonexistent, and he was usually the only black person in the room), he took pains to emphasize that companies like HBO, Showtime and Amazon are all still woefully lacking in diversity when it comes to their top-level decisionmakers.

Lozano then brought up the fact that representatives from IDA’s Enterprise Documentary Fund travel all over the country to listen to filmmakers. She also strongly warned funding applicants against “window dressing” — i.e., that adding diversity to your team solely to get financing would inevitably backfire and also hurt your chances in the future. (However, later in the conversation she noted that it’s “flat-out racist” for a filmmaker to complain they are having trouble diversifying their team. If that’s your problem, she stressed, “You will soon be obsolete.”)

After Rana explained that Kartemquin primarily funds Chicago and Midwest filmmakers, Walker moved the conversation on to the subject of class. Statistically, she said, documentary filmmakers mostly come “from means.” Of course it should make sense that nonfiction filmmaking — like all the arts — would be a privileged pursuit. Yet I suddenly realized I’d never given the financial stability of the person behind the lens really much thought at all. In response to this problem of inequality, Rana wanted filmmakers of modest means to know that it was perfectly fine to go slow — to make a living teaching, for example, and only work on their films when time allowed. Walker then asked a crucial question when it comes to gatekeepers: “Who defines quality?” (And added, “Critics who are watching, this is for you, too.”) An “audience-focused strategy” at top-tier festivals is desperately needed, she added. In other words, who, besides a white liberal audience, needs to see your film?

Lozano concurred. Filmmakers were better off focusing on “a distribution strategy that fits your audience.” Pollard noted that he would show his films anywhere. (Lozano and Pollard, by the way, were ruling the applause meter by this point.) I suddenly felt validated as it’s what I’d been advising for years as a programmer. Top-tier fests are not the only game in town anymore, so why aren’t more filmmakers doing their research and finding the festival that fits rather than simply the festival that has the most buzz?

At this juncture, Walker opened the conversation to include the whip-smart audience. A man who identified himself as a “Latino Jew” wanted to discuss “identity as ideology.” He related a story about his feature film, This Taco Truck Kills Fascists, a tale which culminated in his getting pushback from a Latino gatekeeper at PBS. Next, a Maynard team member (Dolly Turner, who also serves on the IFP advisory board) stepped up to the mic to emphasize the “multicultural organization ecosystem.” Multicultural film fests were being overlooked as gatekeepers, she decried, noting that Ryan Coogler had won top honors for his short film Fig at the American Black Film Festival all the way back in 2011. (In other words, Coogler’s only a new discovery to those who hadn’t been looking for him.) So why weren’t the gatekeepers, like MacArthur, consulting these fests? Equally importantly, why weren’t they insisting that festivals like Sundance and Tribeca apply affirmative action from top to bottom — including within the programming team — before receiving any funding?

The panel seemed to be listening deeply to these audience members, taking their suggestions absolutely seriously. Another audience member, a young (white) woman, then urged everyone to visit Storyshift, explaining that her organization has specific “principles and praxis for accountable storytelling,” a diversity pledge that everyone from filmmakers to funders can sign on to. After she also received a round of clapping, a young (black) woman took the microphone to say that she found one of the festival’s selections in particular, David Schalliol’s The Area, troubling.

While Schalliol’s world-premiering film follows a heroic, black female activist on Chicago’s South Side as she battles developers in order to save her neighborhood, the woman at the mic took issue with the fact that this was a case of a white filmmaker telling yet another story in which, in the end, blacks fail. She looked directly at the panelists, around at the audience, and earnestly wondered, “If a black filmmaker has 100% control, does that scare you?” While no one on the panel identified as white, Lozano tried to tackle this sincere inquiry, then offered that her own decision makers at IDA are all outside the top-tier festival bubble in addition to being diverse. True inclusiveness, Lozano stressed, depends on breaking the cycle of funding the same film festival darlings over and over again. And then the moderator nodded at this searching student filmmaker and said, “Let’s talk” (after the panel).

Another audience member came forward to say that he wasn’t a filmmaker but a documentary subject — and that the film he was in had saved his life. He was certain he’d be in jail for his activism if it hadn’t been for the camera that had been following him. But then he also stressed that though he was a black man, the black media had never been there for him. (Perhaps another cautionary tale to remind us that our definitions of identity need to be refined.) After his round of applause died down, True/False programmer Abby Sun stepped up to urge a redefinition of “success.” It was important to keep money in minority communities, and companies like HBO just don’t do that, she emphasized. “Why are we funding million dollar projects?” she asked with a hint of exasperation, when we needed to be open to “different ways of making media.” There was raucous clapping once again.

The last audience member to approach the microphone, a black filmmaker, wondered, “Are any of you uncomfortable?” then looked around. “Good for you (if you are)!” he exclaimed to widespread acclamation. “Racism is a white people’s problem,” he added. Then he offered that, “whites will get it wrong” unless they ask minorities, “How do you want your story told?” He himself was self-funding, he said, stressing that he didn’t want a white guy telling his story. With that, the moderator asked the panel for parting thoughts. Any tension that may have lingered in the air immediately disappeared with Lozano’s response. “If anyone is getting rich in this room please come tell me how you’re doing it.” When the laughter died down she added that, ultimately, they are all just trying to do the best they can.