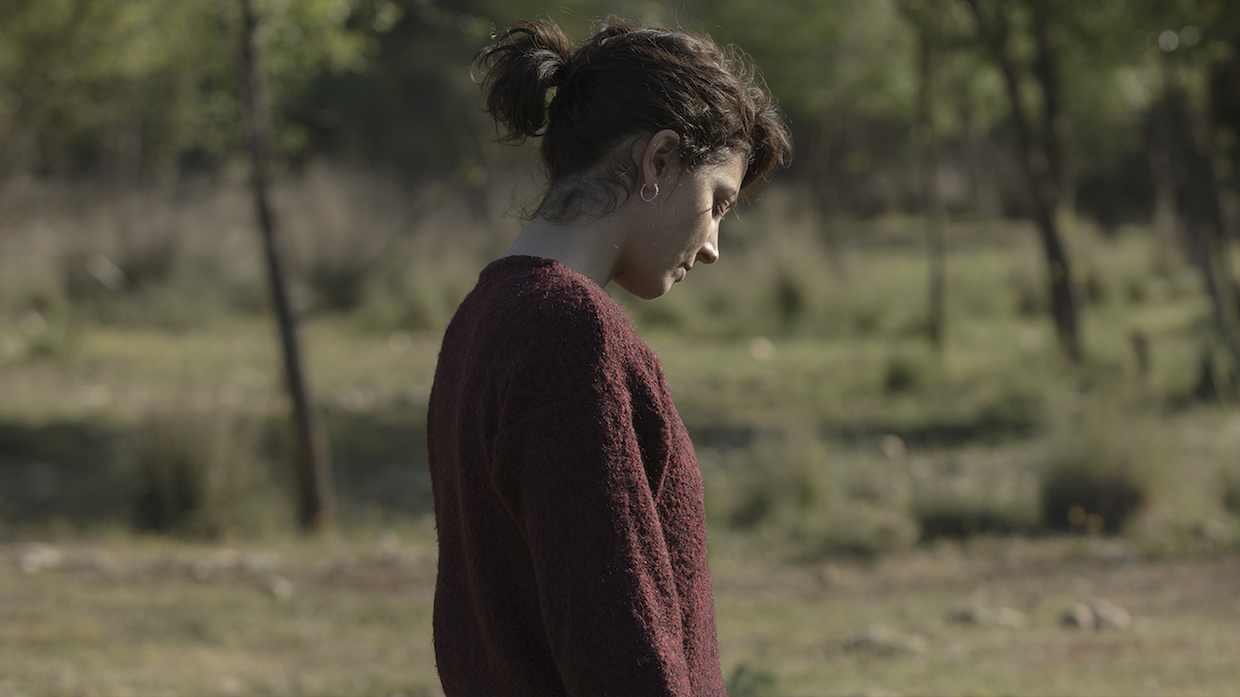 Speaking of soap operas: Jaime Rosales follows Farhadi’s plunge into the vernacular of Spanish culebrones with a complementary appropriation of melodrama in Petra, an achronological chronicle of one woman’s search for truth, history and her own identity. Starring Bárbara Lennie (who, funny enough, also appears in a significant supporting role in Everybody Knows), the movie intrigues from the outset, playfully opening with a title card announcing Chapter II, along with a concise summary of the key narrative information this chapter will provide (“How Petra enters Jaume’s world”), a strategy that each subsequent chapter also employs. At his characteristically unhurried tempo, Rosales reveals his film’s narrative, which, in brief, concerns Petra’s suspicion that septuagenarian sculptor Jaume Navarro (Joan Botey) is her biological father. Rosales works in lax, gliding steps, suggesting we drift and meander into this breezy locale of cabins, warehouses and contemporary art. Shots of interiors and otherwise, languorously shot by Hélène Louvart (working with Rosales for the first time), float spectrally, drunkenly, hovering into rooms of narrative action with averted eyes, often passing over humans to glance instead at the Dionysian pastorals marking this place. Dialogue occupies but never completely dominates the soundscape, as the rhythm of the community—punctuated as much by Kristian Eidnes Andersen’s abstract score of hiccuped vespers as by the ubiquitous rumbling of wind-grazed trees—sculpts the film’s vaguely sacred tenor. It’s as immediately welcoming and seductive a mise en scène as I’ve encountered in some time.

As Petra reveals itself—gradually, precisely succumbing to the ridiculous—its preoccupations with death, victimhood and see-sawing morality gain primacy over its Transcendentalist impressionism. While Petra‘s turns toward Shakespearean tragedy are arguably even more sober than the humorless melodrama in Everybody Knows I bemoaned in my first dispatch, Rosales’s control is important, productive, even subversive, as the dissonance between his mode of expression and the increasingly grave twists in his plot culminates in a cathartic takedown of patriarchy that feels as clichéd as it does singular. I didn’t mind, for instance, that every left hook that arrives in Chapters IV-VII (also presented out of order) embodied and underscored a theme that was spoken aloud in the film’s opening reel (“All I want from art, from anything, is truth”), because at a certain point the film could only suffer from naturalistic banality (a theme likewise also spoken aloud, near the film’s conclusion). Though any glimmers of mystery are eventually extinguished by the time the credits roll, its truths arrive incrementally, reminding us that bliss is most attainable when knowledge is either absolute or entirely absent. Anything in between is only conducive to deception and misery.

Sergei Loznitsa’s Donbass, an object about which I feel much more moral uncertainty, is nevertheless certain to go down as one of the most impressive films of this year’s festival. Inspired by real events that occurred in the years since the 2014 Ukrainian Revolution and the subsequent war in Donbass, Donbass wavers between absurdist, theatrical and verité attitudes, highlighting the divides and severe cruelty ignited by the collapse of the Soviet Union. Coming only a year after his staggering and exhausting A Gentle Creature competed for the Palme d’Or, Donbass is miraculous in its ability to feel simultaneously urgent—it was, like Loznitsa’s recent documentaries Maidan (2014), Austerlitz (2016), and Victory Day (2018), allegedly assembled very quickly, with the director claiming that he only wrapped shooting six weeks before it was screened in Cannes—but also meticulously designed and choreographed. This is the first time that Loznitsa has worked with cinematographer Oleg Mutu since his fiction feature debut, My Joy (2010), and indeed the aesthetic and structural approach here is closer to that film’s than any of Loznitsa’s others. Both adopt an episodic structure that allows action and consequences to distend, ramble, disappear, then reappear, moving in and out of micro-narratives, themselves only loosely and elliptically linked into something like a daisy chain.

The experience is veritably nightmarish—an unforgiving wallow in images of humanity at its worst—and if I have any hesitation in declaring this, after a single viewing, to be a great, even monumental achievement, it’s generated by my uneasiness regarding Loznitsa’s decision to obfuscate many of his episodes’ political specificity. While uniform patches and battered flags adorn some subjects and places, the audience is dropped into most situations in medias res, encouraging us to watch people behave sans instigation, removing (as much as is probably possible for a situation this extensively documented—especially by Loznitsa himself) the details that might allow us to feel content with where we lay our sympathy. To an outsider’s eyes (and that certainly applies to me), nationality and other seemingly essential signifiers are often difficult to discern; on the one hand, this plays well with Loznitsa’s primary interest, which was, according his personal note on the film, to present a vision of a “particular type of human being, which is produced by a society where aggression, decay and disintegration rule.” In this presentation, morality becomes difficult, even treacherous to try and pin down. My reaction, then, became dictated by more primal, less rational impulses; I was merely a witness to behavior in itself—detached, untrained. It’s a fascinating but challenging position to place a viewer into, and I could rarely shake the sense that it was (potentially enormously) irresponsible—verging on dangerous as an artistic choice. That said, it is a choice, and one that’s lingered with me and given me more pause than all the other films I’ve seen here so far combined.