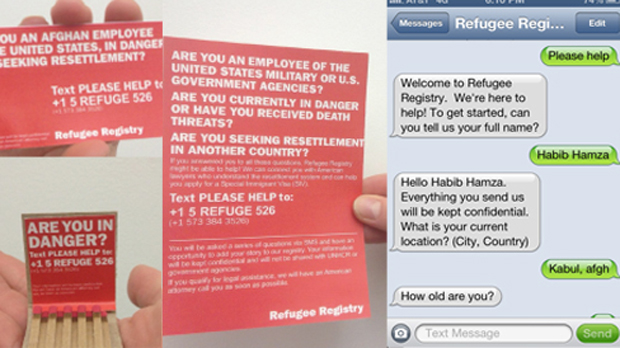 The most encouraging aspect of POV’s third hackathon, which wrapped with a public presentation Sunday night, was the social commitment of the five projects. When they hit close to home, events like Monday’s bombing in Boston can make you step back and reevaluate your work, its purpose and meaning. So it was gratifying, a day earlier, to see how committed the hackathon teams were to remedying some kind of societal problem, including some situated half a world away. Over two days the participants worked together to use new technologies to make real strides against issues like homelessness, war, and the neglect of refugees. In the end, hackathons are a lot of fun, as are the projects that come out of them, but this awareness made this particular event feel particularly noteworthy.

How does the hackathon work? Team members including filmmakers, technologists, and others come as a team or are placed together for a long weekend with a mandate to create a functional piece of technology around an existing project. In some cases this means traditional documentaries that have already been completed; other times footage or images may be shot but not assembled in any meaningful way. In any case, the POV hack is not meant to create a marketing campaign for a feature documentary. With a mission to explore and redefine documentary for the web, the event seeks to foster projects that utilize interactivity in the best way, separate from any linear films that may be attached to them.

This was POV’s third hack and the second hosted at Huge in DUMBO, Brooklyn. The event is the brainchild of Adnaan Wasey, POV’s Digital Director, who was also quick to point out a fourth hack is scheduled for July 27-28, with an entry deadline of May 31. In his opening remarks Wasey said teams were advised to forget all the ambitious ideas they arrived with; the purpose now was to create some sort of viable product. They were creating demos, to be sure, but completely functional ones–and that requires clarity of vision.

Here’s a quick rundown of the five projects in the order they presented Sunday night. Although all the projects were highly praised, I’m also including some criticisms to illustrate how each project is a work-in-progress:

Refugee Registry – There wasn’t any original film component to this project, but it was based on and developed in conjunction with the new documentary The List, about attempts to expedite the emigration process of Iraqis who have assisted U.S. forces and are hence at risk in their home country. The hackathon team took Afghanistan as their case study and created a prototype for a discrete phone/computer-based registry for Afghans seeking asylum or refuge in the U.S. (seen in the image above). The concept is to use technology to connect at-risk Afghans with American lawyers who can help them negotiate immigration. The audience’s chief concerns centered around online security and the means to make Afghans trust the service in the first place.

@home – This project was designed as one component of a larger public outreach campaign, including a feature documentary with advocate Mark Horvath, to raise awareness about and end homelessness in America. The campaign is about to start, beginning in Chicago in a few months, with live events, screenings, and direct participation with the city’s homeless population. The hackathon team developed an app to accompany this larger effort, creating a game that is played in real spaces, teaching facts about that city’s homeless population (based on the premise that homelessness is always a local issue), featuring video interviews with local homeless individuals, and allowing players to donate real money to fight homelessness. Criticism centered around whether a game was the right format for this issue and the fact it didn’t address the inflow — how people become homeless in the first place.

How to Lose Your Virginity – This is a feature documentary that explores issues of sexuality and, particularly, first-time sexual encounters, with the goal of demystifying them and empowering people with, basically, the tools of sex education. This type of empowerment also implies the ability to discuss personal sexuality openly, and it was to this end that the team attended this hackathon: to create a data engine that could compile and present statistics in a humorous but insightful way. The team created an online survey in connection with the feature film’s website and had enough responses, though nothing nearly approaching statistical significance, to show us how it worked. Results could be filtered through various parameters (gender, sexual orientation, etc. with other like age and race to come) and yield some enlightening information, like the fact that, within just this small population, over 10% of women’s first sexual experience was not consensual.

Return to Elwha – This project also stems from traditional documentary footage, but in this case it is not anywhere near completion as a linear film; apparently the online version of the material the filmmakers came to New York to develop will be just as central to their project as any feature film they complete. The story centers around the removal of two dams from the Elwa River in Washington to restore habitat for spawning salmon. The dams are huge, though, and their removal is nearly as complex an engineering feat as their construction decades ago. In this portion of the project they attempted to set up a website that could appropriately present the footage, as with popcorn binding video clips (through their timecode) to specific places on the map on the river (so dragging your mouse over the river will reveal different clips, often related to that spot on the river). Future work will include additional issues like nearby Native American communities, but one of the audience’s chief concerns was about the lack of mention of hydroelectricity and the dams’ role in stemming global warming.

Portraits of the Enemies – This project is not so much transmedia as simply multimedia. It was far and away the simplest design presented Sunday evening, but that was to its credit rather than detriment. Team member Karim Ben Khelifa is a seasoned war photographer who recently began shooting portraits of combatants and recording brief interviews with them about who their enemy is and why they fight. The weekend’s project was to create an online exhibit capable of most powerfully conveying this project. The eventual result, which is quite graceful (if data heavy) is a site with a vertical line down the middle and soldiers from opposing forces featured on either side. By dragging the line one direction or the other users can hear the interviews, creating the sound mix depending on how far one scrolls,  and read their English translations. Future directions, beyond a planned gallery exhibit, is to get the actual soldiers reading each other’s comments and thus to act as a virtual interlocutor between opposing sides.

Individual participants’ profiles and each of the projects’ prototypes are available on the POV blog.