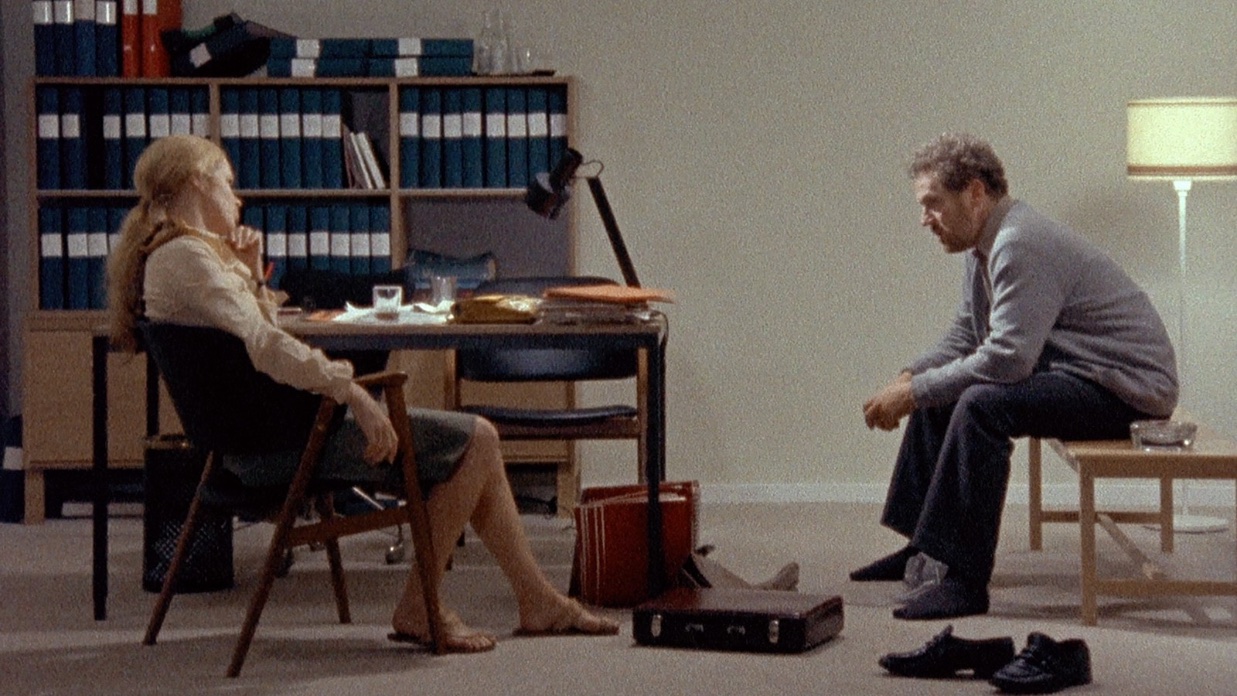 Scenes from a Marriage

When Ingmar Bergman wrote the script for his six-part, five-hour miniseries Scenes From a Marriage in 1973, his wife told him that it was far too personal to connect with a wide audience. She was right about its specificity, but wrong about its appeal — when the show premiered on Scandinavian television it was a smash hit, leaving the streets deserted every night that it was on. Bergman re-edited the material into a feature film of around half the length for theatrical distribution in the United States, where it became a hit on the art house circuit on the heels of the director’s Oscar-winning triumph Cries and Whispers. Both versions of Scenes From a Marriage are now available on Blu-ray from the Criterion Collection, and each is essential viewing. Both cuts tell the same story, of ten years in the relationship of a husband and wife who break up but stay in each other’s lives and run the gamut from tender resignation and passion to physical violence and chilly indifference; the theatrical edit is a concentrated series of intense dramatic moments, while the TV version gets closer to the actual rhythms of a long-term relationship, with longer scenes that sometimes last past the point where we think they’ve exhausted their emotional possibilities, only to yield new revelations and effects. Shooting in 16mm on a low budget, Bergman strips away all sense of artifice, and anything not directly related to the reasons why these two people both love each other and cannot be together is shorn away as well, resulting in a film that is empathetic and longing yet absolutely brutal in its exploration of the ways in which some married couples go to war. The lead performances, by Bergman regulars Liv Ullmann and Erland Josephson, are extraordinary, all the more impressive because Bergman gives them nothing to hide behind and no visual pyrotechnics — the movie is made up of often excruciatingly long takes of their faces in grainy two-shots and close-ups. Although Bergman has described the characters as almost totally lacking in self-awareness, the pain in the picture largely comes from the moments when they do become conscious of who they are and what has become of their lives; Josephson’s self-laceration as he acknowledges his total failure as a man makes this one of Bergman’s most potent critiques of male self-absorption and sadomasochism, at least until the character returns in the even more harrowing sequel Saraband 30 years later. Scenes From a Marriage is such a clear, undiluted intellectual and emotional experience that in a way it speaks for itself more than most films, but Criterion has nevertheless provided some superb supplements on the Blu-ray, including interviews with Bergman, Ullmann, and Josephson and Bergman scholar Peter Cowie.

In the late 1970s, John Cassavetes was struggling to scrape together the dough he needed for what would eventually become his last great film, Love Streams, so he cranked out a genre script that he thought could bring him some fast cash. The product, Gloria, had the desired effect: Columbia snapped up the screenplay as a potential Barbra Streisand vehicle, seeing in Cassavetes’ tale of a tough and fast talking ex-mob moll who finds herself protecting a young murder witness the perfect opportunity to pair Streisand with an up and coming Ricky Schroder. When the intended casting didn’t pan out, Columbia offered the title role to Gena Rowlands, Cassavetes’ wife and regular collaborator, and she talked her husband into directing the movie that he had originally tossed off as a mindless quickie for some other poor sucker to execute. The result was one of the great American films of the early ’80s, and a unique entry in Cassavetes’ filmography; he might have intended for the script to be hackwork, but he was genetically incapable of phoning it in as a director and ended up crafting one of his most delightful, nuanced movies, an expertly engineered genre piece made lively and moving by Cassavetes’ emotional generosity and sly sense of humor. Viewed today, what’s most surprising about Gloria is how pure it feels; although Cassavetes was working for a major studio within a conventional formula, the movie teems with life and richly observed details, yet it also completely delivers the goods as a riveting, suspenseful chase movie. Somehow Cassavetes, one of the most personal and idiosyncratic of all American directors, was able to fulfill the duties of a for-hire genre craftsman in a way that served both the genre and his own preoccupations — the genre gives his insights shape and momentum, and his highly unique view of the human condition infuses old formulas with energy and relevance.

The movie is packed with tense, hilarious, and touching (but never sentimental) moments enhanced by one of composer Bill Conti’s most interesting and inventive scores; the new limited edition Blu-ray from Twilight Time is worth buying not only for the flawless transfer of the movie but for a supplemental feature that allows the viewer to watch the film with an isolated music track that strips out the dialogue and sound effects. The upshot is not only a greater appreciation of Conti’s work but of Cassavetes’ skills as a visual stylist; watching Gloria as a silent movie, one realizes what a deft touch Cassavetes had with camera movement and editing — the precision of his visual technique is extremely impressive, especially for a director often mischaracterized as a loose, improvisatory filmmaker. Twilight Time has also just released a new pressing of Dwight H. Little’s terrific 1992 action flick Rapid Fire that’s even more composer-centric, boasting not only a score-only audio track but a full-length commentary by composer Christopher Young and film historian Nick Redman that delves deeply into the process of writing, performing, and recording music for film. The film itself is a slickly directed and edited vehicle for Brandon Lee, making his screen debut a couple of years before his tragic death on the set of The Crow; as a witness to a mob killing who teams up with an unconventional and highly committed cop (Powers Boothe) to take down Italian and Asian mobsters as well as corrupt feds, he’s got his dad Bruce’s charisma combined with a laid-back, infectiously appealing California attitude. The movie as a whole adopts Lee’s sensibility, delivering virtually non-stop fight sequences and expertly choreographed shoot-outs yet never getting weighed down by its own violence — Little directs with an expert sense of rhythm that makes the constant action energizing and exhilarating rather than exhausting. The movie’s jammed with great supporting performances from reliable character actors like Nick Mancuso and Raymond J. Barry, and boasts dynamic urban photography by Ric Waite, who previously shot The Long Riders and 48HRS. for Walter Hill. It’s the kind of modest but beautifully crafted thriller that I really took for granted back when Hollywood was cranking them out in the ’80s and ’90s, but whose pleasures seem extremely valuable now that they’re in shorter supply. Like Gloria, the Rapid Fire Blu-ray is limited to 3,000 units, so I’d highly recommend snapping both titles up while you can.