“The Episodes Generate Their Own Lives”: John Peter Kousakis on Directing the “No-Rules” NCIS: Los Angeles 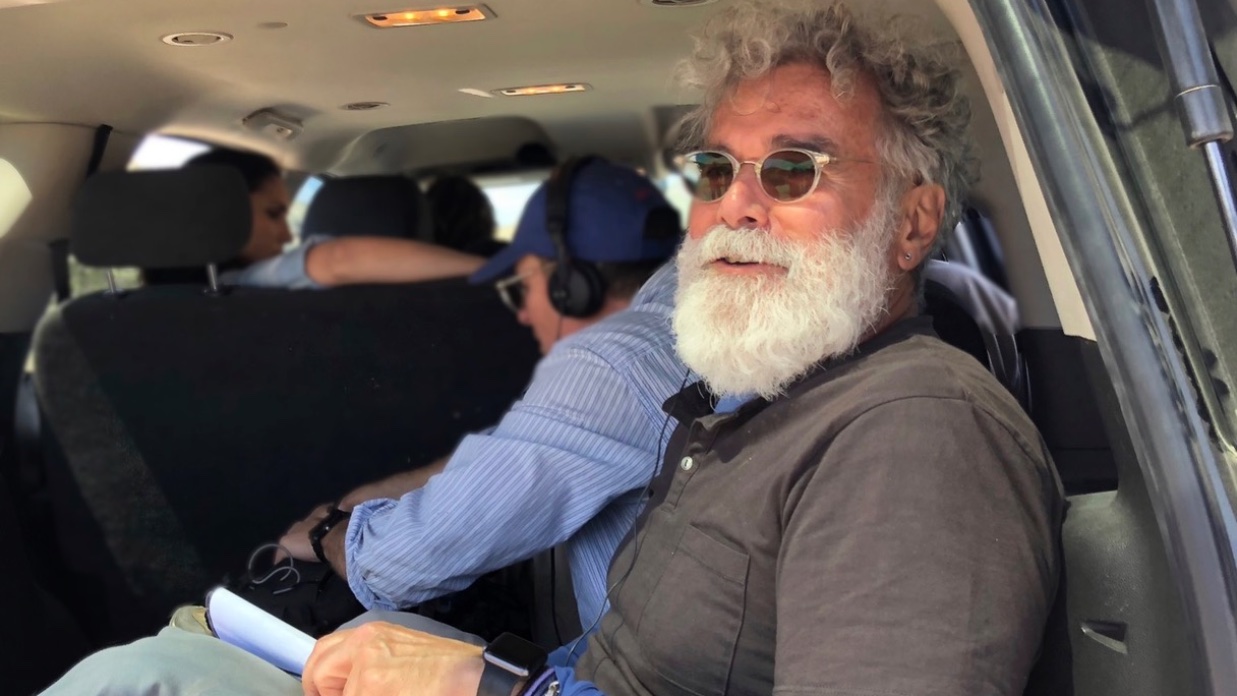 John Peter Kousakis began his career in 1979 as a production assistant on the television mini-series The French Atlantic Affair, which led to work as a second assistant director on CHIPS. From there Kousakis worked as an AD on some of the most popular series of the era, including The Greatest American Hero, The Fall Guy, and The A-Team, but he caught the directing bug during his first foray into features, working as a second AD on the Burt Reynolds-Hal Needham car chase extravaganza Cannonball Run II. Since then he has moved back and forth between production management positions and the director’s chair, culminating in his current position on NCIS: Los Angeles. Kousakis is an executive producer and line producer on the series, but he’s also its most audacious and inventive director, consistently finding innovative ways to stage not only incredibly elaborate action sequences (often shooting with over a dozen cameras at once), but character-driven dialogue scenes that exhibit a visual energy and complexity all the more remarkable given the fact that Kousakis is often working with sets that have appeared in hundreds of episodes. He can take a typical expository scene and, through intricate blocking and deep-focus compositions as well as a loose, naturalistic direction of actors, make it seem as dynamic as a large-scale action set piece — and when he does get his hands on one of those set pieces, the spectacle compares favorably with action sequences on shows and features that have far greater resources than Kousakis is typically working with. I spoke to him the week of the DVD release of NCIS: Los Angeles — Season Nine while he was deep into work on the tenth season, which premieres on September 30; I began by asking about how he got his first directing job.

John Peter Kousakis: I was working on The A-Team as a 1st AD and on a personal track to pursue directing when the executive producer on the series asked me to become the unit production manager, replacing the current UPM who was moving up the executive ladder. Needless to say, I was not happy but, being the family oriented person I am, and creating my own large family, I needed to have steady employment. The UPM job on The A-Team provided the financial security I required at the time. Luckily, there was a negotiation where the executive producer guaranteed me an episode to direct if I assumed the UPM position, so I had both the security of the UPM job and my first opportunity to direct, a true win-win situation.

Filmmaker: Was there a big learning curve, or by the time you started directing had you spent so much time on sets that it came naturally to you? I’m curious about how your background in production management informed your approach to directing.

Kousakis: I’d be lying if I said there was no learning curve, though there’s no doubt that my previous production experience helped lessen my anxiety. When I first began directing, I would say that I emphasized too much of my production mind over my creative mind, but over the years I’ve become much more conscious of balancing the two. I direct now with full confidence that the production side of my being is well in body and mind and needs no prompting. On NCIS: Los Angeles I’m an executive producer and line producer, and when I’m directing my responsibility is always divided between my directing duties and keeping my attention focused on what is transpiring during the prep of the next episode.

Filmmaker: One of the things I love about NCIS: Los Angeles is the fact that you somehow manage to find L.A. locations that don’t seem like they’ve been filmed a million times — if they have, you shoot them in ways that make them feel fresh. What’s your philosophy about choosing and utilizing locations?

Kousakis: From a practical standpoint, our locations need to be film-friendly in a way that will serve the extreme time constraints of a network episodic schedule. There are instances where we will chose a location purely for the aesthetic needs of the script, and then will compensate for this decision by compromising on the other choices required to stay on an episodic schedule. At all costs, we endeavor to fulfill the aesthetic needs first, then proceed to balance out the rest. Sometimes it’s worth a complicated company move to shoot one scene that elevates the whole episode above a typical procedural. It’s a little more challenging for us than on a streaming show or something on HBO where they have more time — we’re shooting seven-day episodes in 24-episode seasons.

Filmmaker: I’m surprised to hear you only have seven days to shoot each episode. They’re usually pretty massive in terms of scale and the complexity of the action.

Kousakis: We do have the occasional eighth day for episodes that are bigger and greater in their demands, but for the most part we just get the most out of each seven-day episode by strategically meeting with each department head and pre-planning every sequence. The director of photography, Victor Hammer, is one of the most inventive, creative, talented, and fearless cinematographers I’ve had the pleasure of working beside, and we collaborate throughout the prepping process. He attends our tech scouts, which is where we discuss the tone and aesthetic vision for each episode. Victor operates with no fear; we shoot the series with two Alexa SXTs every day, adding additional cameras as they’re required. For the action sequences we carry two Canon EOS 5D Mark IVs, two Canon EOS 1D Mark IIs, two EOS Rebel T7is and two T5is, and eight GoPros models 3, 4, and 5. We also have an Osmo that acts as a kind of mini-Steadicam with three lenses, a 10mm, 12mm, and 24mm — we use that for a lot of the chase sequences where we’re running with our characters, either pulling them or following from behind. There’s no second unit on our show — the first unit shoots all of the action in that seven or eight-day schedule — and when we do a big action sequence we’ve got all of those cameras running, sometimes up to 13 or 14 cameras at once when you factor in the GoPros attached to cars and motorcycles and whatever other vehicles are involved in the scene. In the old days when I was doing CHIPS or The A-Team we were lucky if we had two giant Panavision cameras and a couple of Eyemos.

Filmmaker: And how precisely do you lay out the plan for each episode? Do you storyboard?

Kousakis: I am not a storyboard guy. I will spend numerous hours working intricate sequences out with my stunt and special effects coordinators and with my AD. If they suggest the sequence would be better administered by storyboarding, I’ll oblige. I have a loosely created shot list, but I use it as a guide, not the Bible. It’s important to me that what I see during rehearsal, on the day of shooting, not be restricted by a set shot list. I like to plan in general terms for each sequence but be organic on the day, not locked into a strict plan where I’m unable to be flexible. If I’m telling a story that’s more character driven I tend to shoot with wider lenses for my masters and close-ups, filling the frame with story and creating a flow to the visuals that moves smoothly from one scene to the net. If the script is more action oriented, I prefer to shoot with handheld and Steadicam equipment. When I’m directing driving sequences I love using the edge or pursuit vehicle with the articulated arm and ability to lead, follow, and shoot from all directions as the vehicles are moving. NCIS: Los Angeles has no rules about how to shoot each episode; the individual episodes generate their own lives. The only rule or requirement is to keep the camera moving as much as possible and create interesting transitions from one scene to the next.

Filmmaker: How do you work with actors who are coming on as guests to work for just one episode, maybe even just one scene? How do you help them integrate their way of working with a primary cast that’s been doing this show together for years?

Kousakis: I tend to let each actor find their own level and balance within the set structure of our series — I act as a guide and sounding board to any guest actor looking for direction or searching for the tone of each scene. I’m very respectful of the artist’s needs and their quest to perform at their highest and most confident level, and the main cast is very gracious and respectful of each guest actor, as they are when a new regular cast member like Nia Long is introduced into the series. I worked with her to give her as much background as she needed and the cast helped in every way to make her feel comfortable and secure. My philosophy has always been to serve my fellow cast and crew with sincere truth, loyalty, and unwavering respect. I like to be prepared and never afraid to make a decision, always keeping the train moving and engaging everyone in the process of making the best product we can. They know that I care about them first…and the episode second. With that attitude, the cast and crew will undoubtedly work to achieve their best. I consider myself a sage mentor and father figure of a dysfunctional, beautiful, hard working, and uber-talented family. There is always dysfunction within the process; it’s how it’s managed and how everyone is pulling the rope in the same direction that matters most.