Art of the Real 2019: Darkness, Compulsive Cinephilia and Godard 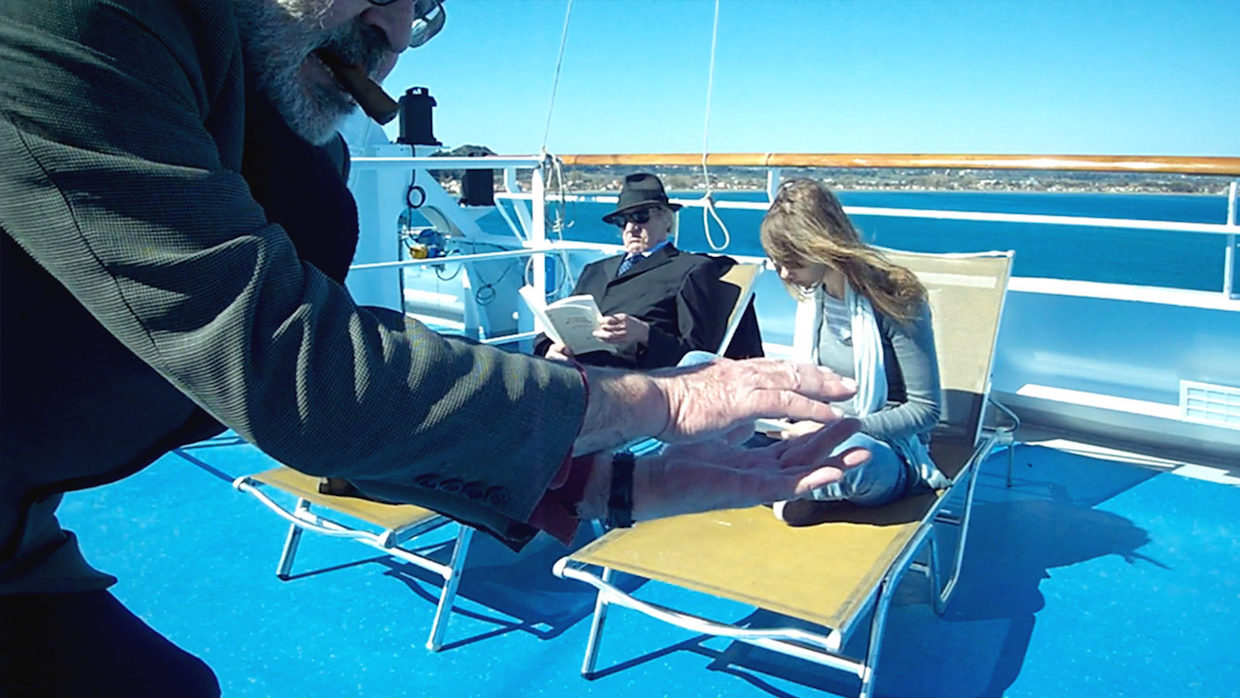 2016: not a good year for most people, and certainly not for Frank Beauvais. His Just Don’t Think I’ll Scream is the opening night film at this year’s sixth annual Art of the Real series, Film Society of Lincoln Center’s perspective on the year in nonfiction. Handily for me, Beauvais (a music supervisor and documentarian making his feature debut) has written his own IMDb synopsis, upon which I cannot improve:

January 2016. The love story that brought me to this village in Alsace where I live ended six months ago. At 45, I am now alone, without a car, a job or any real prospects, surrounded by luxuriant nature, the proximity of which is not enough to calm the deep distress into which I am plunged. France, still in shock from the November terror attacks, is in a state of emergency. I feel helpless, I suffocate with contained rage. I am lost and I watch four to five films a day. I decide to record this stagnation, not by picking up a camera but by editing shots from the stream of films I watch.

That would be 400+ films (their titles are alphabetically listed in the end credits) which Beauvais watched from April to October, while trying to assemble enough capital to leave the village where he’d lived with his ex and return to Paris, where friends and something like a normal life awaited. Beauvais tells the story of this miserable, self-locking purgatorial period in a brisk, uninflected monologue devoid of bad one-man-show vocal histrionics. There’s no room tone or music, just Beauvais’s unsparing chronicle of a dismal spring, summer and fall, illustrated by a truly overwhelming number of images (the editor is Thomas Marchand). Beauvais’s approach defamiliarizes footage from many dissimilar sources— industrial/government films from the ’40s and ’50s cheek by jowl with East German dramas, Elf and Nocturama harvested in equal measure, a truly heterogeneous assemblage culled from a cinephilia as admirably omnivorous as it is obviously unhealthy. This aren’t the kind of marathon screenings that e.g. Richard Linklater did in his formative years, when he mainlined hundreds of films a year as a kind of self-generated film school preparatory to making his own work. This is far less useful or productive—Beauvais is already clearly a well-viewed guy, and the habit does little more than feed itself. At some point, Beauvais notes, the movies stopped being windows out into the world and only became wildly unflattering mirrors back on himself.

Beauvais’s approach to organizing these clips isn’t heady montage; no serious mental energy is required to forge a metaphorical link between an obliquely apposite image and the narration it’s accompanying. If anything, Beauvais tends to be pretty literal-minded—shots of farmers to accompany bitching about provincial mores and so on—but it still takes a lot of focus to keep up, because the shot seems to change no more than every five seconds and close-ups and faces are largely (though not entirely) elided. Beauvais does not have trouble finding images to match his self-flagellation, constantly refreshed political despair or dark family memories, and duly/inevitably interrogates whether this impulse to transmute his marathon ingestion (which he admits is a way to avoid an increasingly intolerable and inhospitable world) into art isn’t just a way to pseudo-legitimize his pathology. He definitely appears to be the kind of viewer for whom the only thing better than watching movies is avoiding them altogether. Friends come to visit, and he can’t stop himself from suggesting that they watch a movie, an idea illustrated by jagged spikes going through a doll’s eyes—literally better to gouge yourself than submit to yet another image. Songs also keep him company, and one that fits the year’s bleakness/his mood is Bonnie ‘Prince’ Billy’s “I See A Darkness.” This is played over the end credits in full, leveraging a song about death for at least three levels of meaning: the darkness of a screen before the first images or titles disrupt it, Beauvais’s darkness mirrored back at him and the ultimate darkness of submission to a medium. This is a brisk, stimulating movie which concludes (correctly) that compulsive cinephilia is a rewarding parasite at the best of times.

I did not have time to preview as much of this year’s lineup as I’d like. (The selection includes the first NYC screening of No Data Plan, whose director Miko Revereza I profiled last year.) I did, however, check out another film-centric program. Paired with Film Catastrophe, Mauro Andrizzi’s short Cairo Affaire tells three discrete stories that build to a synthetic tonal whole. The first pairs inherently fascinating footage of Tehran in 2008 (lots of streetscapes) with a story, told in onscreen subtitle text without voiceover, about an ambiguous encounter with an Iraqi woman who approached Andrizzi about possibly shooting a film in her homeland. The story climaxes with a strange meeting with Iraq’s ambassador at their Iranian embassy which seems sinister, but from which there’s never any further development—a vague threat, exact nature unknown, consequences ultimately only the production of this anecdote. Still, the proximate political tensions of the moment are obvious, as they are in the second story—another strange festival reminiscence, this time from Cairo in 2016. That summer, first sharks and then crocodiles began attacking; the Egyptian government ordered the sharks killed and their bodies shown to the media while speculating if this was part of a coordinated Israeli offensive. (Andrizzi illustrates with clips from Jaws.) This story is told in large blocks of text on block leader in between images of very expensive festival events, tourist jaunts to the pyramids etc. The final segment isn’t from Andrizzi’s own footage but rather the public archives of Yemen TV, switching back to silent subtitles to tell the story of the life and death-by-American-drone of Al Qaeda jihadist Anwar al-Awlaki. The first story is personal and inconclusive, the second a fragment of one summer of Egyptian national history that subtracts the first person, the third straight documentary with a deadly ending. The link is the constant intersection of film and geopolitical tension (most of it, predictably, involving the fallout from recent American adventures in global destabilization). All of the footage is rough and ready but fascinating in its access, and the tension created by two inconclusive stories climaxing with the hammer absolutely coming down in the third feels right.

Paul Grivas’s Film Catastrophe has much less at stake geopolitically, but the short/feature pairing makes sense: here, too, film and the ambient political moment collide, this time as inadvertently orchestrated by Jean-Luc Godard. Grivas was a DP on the cruise-ship half of Film Socialisme, behind-the-scenes footage of which comprises the bulk of this 54-minute feature. Godard is a gnostic aphorist/diagnostician who’d probably love to be deemed prophetic as well, and it’s almost too perfect that the vessel he filmed on, the Costa Concordia, sank at sea in 2012. The cruise ship’s tacky splendor was heavily mediated by the variety of digital cameras and glitching/other effects Godard leaned into rather than trying to minimize—still, his contempt for a more-perceptible-than-usual symbol of late capitalism was clear, so its wreckage seems symbolically valedictory (or would—32 people died in the accident, so that doesn’t seem appropriate).

Grivas bookends his film with passenger-captured footage of the boat during its final moments, but mostly this is a behind-the-scenes look at 2009 Godard in action. It’s a very concert movie proposition, since the performer is either funny and interesting to you or not; as someone who’s taken a long time to make my peace with him, and who only recently more or less submitted, this was a lively watch. Grivas returns regularly to take after take of one scene, a should-be-simple two-person dialogue exchange in a ship’s corridor. One performer keeps forgetting his lines, but beyond that Godard micro-directs both parties’ readings, word emphasis choices, speed of delivery, where they look, etc.—the film makes clear how much hands-on work he puts into getting his late-period performers to sound like one unitary voice. Elsewhere, he sits on the deck, watching group exercise sessions with undisguised bemusement; when shooting, he takes his time setting up shots and recalibrating blocking, generally using his hands as a clapper (although when Patti Smith shows up, he breaks out the real thing). The film’s other attraction, I suppose, is the chance to see some of its dialogue translated as clearly as possible, rather than in the fragmentary “Navaho English” subtitles used for its release. Grivas, too, leans into the digital noise of the many image sources, occasionally heightening it through interventions (stopping, freeze-framing and rewinding a boy tossing a balloon soccer ball in the air) but mostly letting the periodized qualities speak for themselves. The technology has already definitively time-stamped itself in a gorgeous way and, if nothing else, Film Catastrophe kind of made me want to rewatch Film Socialisme, an impulse I’d have found inconceivable ten years ago.