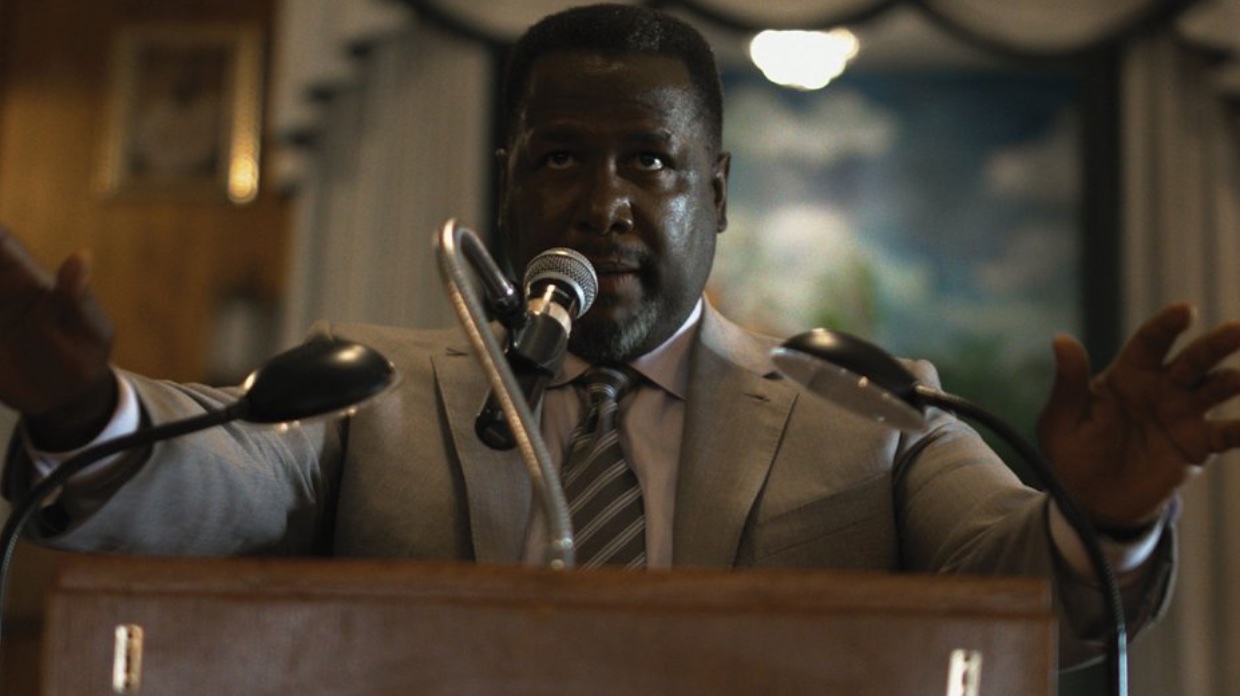 From the press release, a complete list of the winners is below, and check back on the site next week for our critic wraps.

Founders Award for Best Narrative Feature – Burning Cane, directed by Phillip Youmans. The winner receives $20,000, sponsored by AT&T, and the art award “Bloom” by Fred Tomaselli. The award was given by Robert De Niro and Jane Rosenthal on behalf of the jury. Jury comment: “The Founders Award goes to a voice that is searingly original. One of the jurors compared this filmmaker’s unique voice to a latter day Faulkner, Welty, Williams. We loved this filmmaker’s vision and we love this filmmaker’s inevitable brilliant future. We are honored to present this award to Phillip Youmans for Burning Cane.”

Jury comment: “For his portrayal of a troubled, passionate Preacher the best actor award goes to Wendell Pierce in Burning Cane.”

Special Jury mention: “For work that took us to the icy coasts and sweltering kitchens of rural Maine, Todd Banhazl for Blow the Man Down.”

Special jury mention: “To a story of a woman finding her biological family and her logical family on the highway, Ani Simon-Kennedy for The Short History of the Long Road.”

Best International Narrative Feature – House of Hummingbird (Beol-sae) (South Korea, USA) directed and written by Bora Kim. The winner receives $20,000 and the art award “Easter” by Eddie Kang. Jury comment: “In this beautiful film, a seemingly un-exceptional girl is truly seen by another human being for the first time. Through that random connection, her perspective of herself, and hence her life, is transformed. The award for Best International Narrative Feature goes to Bora Kim for House of Hummingbird.

Best Documentary Feature – Scheme Birds (Scotland, Sweden) directed and written by Ellen Fiske, Ellinor Hallin. The winner receives $20,000, and the art award “Oil Lotus Woman” by Shepard Fairey. Jury Comment: “For its poetic, haunting depiction of compelling characters living on the edge. Every element of the film, from editing to cinematography to point of view, is superb. The filmmakers convey their voice in a unique and present-tense way. We’re proud to present the award for best documentary feature to Scheme Birds.”

Best Editing in a Documentary Film – Editing by Jennifer Tiexiera for 17 Blocks (USA) directed by Davy Rothbart. The winner receives $2,500. Jury comment: “The award for best editing goes to a film for its profound treatment of vast amounts of honest, often raw footage. The film is structured in a way that renders some of the most affecting moments with great subtlety. Viewers are transformed over the course of the film, a testament to the choices made in its making. The award for best editing goes to 17 Blocks.”

Best New Narrative Director – The Gasoline Thieves (Huachicolero) (Mexico, Spain, UK, USA) directed by Edgar Nito. The winner receives $10,000, and the art award “Love Trap” by Walter Robinson. Jury comment: “A coming of age story, social commentary, and at some points a revenge tale, this new director juggles each genre with equal sensitivity and truth. The film is impressively shot, with the messy and complicated inner workings of the characters’ situations reflected in the emotional camera work that has a blazing intensity. Like the movie’s central character, this movie is defined more by its heart than its swagger. We present the Best New Narrative Director award to Edgar Nito for The Gasoline Thieves. We can’t wait to see more from Edgar.”

Albert Maysles New Documentary Director Award – Scheme Birds (Scotland, Sweden) directed by Ellen Fiske and Ellinor Hallin. The winner receives $10,000 sponsored by CNN Films, and the art award “Indigo Rocket Over Tribeca” by Stephen Hannock. Jury comment: “For a film that tells a deeply compelling story, but realised with cinematic vision and invited us intimately into the lives of the film’s characters. This film is a remarkable achievement, made even more so because it’s from first time feature directors. The winners for the Albert Maysles Award for Best New Documentary Director are Ellen Fiske and Ellinor Hallin for Scheme Birds.”

THE NORA EPHRON AWARD
The jurors for the 2019 Nora Ephron Award, presented by CHANEL, were Debra Messing, Chloë Sevigny, and DeWanda Wise.

The Nora Ephron Award – Rania Attieh for Initials S.G. (Iniciales S.G.) (Argentina, Lebanon, USA) directed by Rania Attieh, Daniel Garcia. Rania receives $25,000, sponsored by CHANEL, and the art award “Alison the Lacemaker” by Swoon. Jury comments: “The film we chose is thrilling, distinct, and fully immersive. It was also something we’d never seen before. A true cinematic experience. We are elated to award this years’ Nora Ephron Award to Rania Attieh for Initials S.G.”

Best Narrative Short – Maja (Denmark) directed by Marijana Jankovic. The winner receives $5,000 sponsored by Bulleit Frontier Whiskey, and the art award “Amy Sillman” by Amy Sillman. Jury comment: “A deftly told story of a misunderstood young immigrant girl on her first day at a new school rides a line of danger and yearning innocence, challenging our assumptions and twisting the personal into the political with a grace our moment requires.”

Special Jury Mention: “This film celebrates the humanity and ingenuity of a character from the margins of society on a propulsive, fast-pedaling quest for the best tortilla in New York, The Dishwasher directed and written by Nick Hartanto, Sam Roden.”

Shorts Animation Award – My Mother’s Eyes (UK) directed and written by Jenny Wright. The winner receives $5,000 sponsored by Bulleit Frontier Whiskey, and the art award “Balloon Dog, Magneta” by Jeff Koons. Jury comment: “For its delicate, elegantly simple, breathtakingly imaginative animation and its ability to hold the heart of anyone who has a mother — whether beating in grief or in celebration. To this indelible portrait of immeasurable love, we are thrilled to give this award to My Mother’s Eyes.

Best Documentary Short – Learning To Skateboard In a Warzone (If You’re A Girl) (UK) directed by Carol Dysinger. The winner receives $5,000 sponsored by Bulleit Frontier Whiskey, and the art award “28 Millimeters, Portrait of a Generation” by JR. Jury comment: “A revelatory tale of how skateboarding can fuel the future of dignified resistance to gender oppression in war torn Afghanistan. Told through the Innocent confessions of young girls and the steadfast dedication of their headstrong female instructors, this film shines an uncompromising and ultimately uplifting light onto righting injustice.”

Special Jury Mention: “An unflinching and delicate portrait of a loving father with a haunted past who bravely decides to stand up to the powers that be in Ferguson, Missouri in St. Louis Superman.”

Student Visionary Award – Jebel Banat (Egypt) directed and written by Sharine Atif. The winner receives $5,000 sponsored by Bulleit Frontier Whiskey, and the art award “Chrysler Building” by Jane Dickson. Jury comment: “This tale of gendered oppression and aspirant liberation paints a searing portrait of life in the Egyptian countryside. Two inseparable young women are tested on their commitment to local mores despite their growing fear of losing themselves and each other.”

Special Jury mention: “Set in rural China, this stunningly cinematic short Pearl (Zhen Zhu) follows the strife of a small family down a path of rupture and loss.”

The 2019 Storyscapes Award, presented by AT&T, which recognizes groundbreaking approaches in storytelling and technology, jurors were Lisa Osborne, Paul Smalera, and Adaora Udoji.

Storyscapes Award – The Key (USA, Iraq), created by Celine Tricart. The winner receives $10,000, presented by AT&T. Jury comment: “This piece was the full package. Emotionally resonant, the winner demonstrates a seamless fusion of technology and narrative. The experience combines a real actor with fantastical, immersive visuals and achieves a rarity in VR storytelling with its use of metaphor to represent an ongoing, real-world crisis. Of particular note are the superbly executed virtual reality technical details, including character design, use of color, and sound design.”

Feature
The winner of the Best Feature Film was awarded to Almost Human for The Carlsberg Foundation. Directed by Jeppe Rønde.

Short
The winner of the Best Short Film was awarded to The Face of Distracted Driving for AT&T. Directed by Errol Morris for BBDO New York.

Episodic
The winner of the Best Episodic Film was awarded to History of Memory for HP. Directed by Sarah Klein and Tom Mason for Redglass Pictures, The Garage by HP.

VR
The winner of the Best VR Film was awarded to The 100% by Stand Up to Cancer, HP and Intel. Directed by Hernan Barangan for Springbok Entertainment.

For more information on all of the 2019 Tribeca Film Festival films and programming, please visit tribecafilm.com/festival