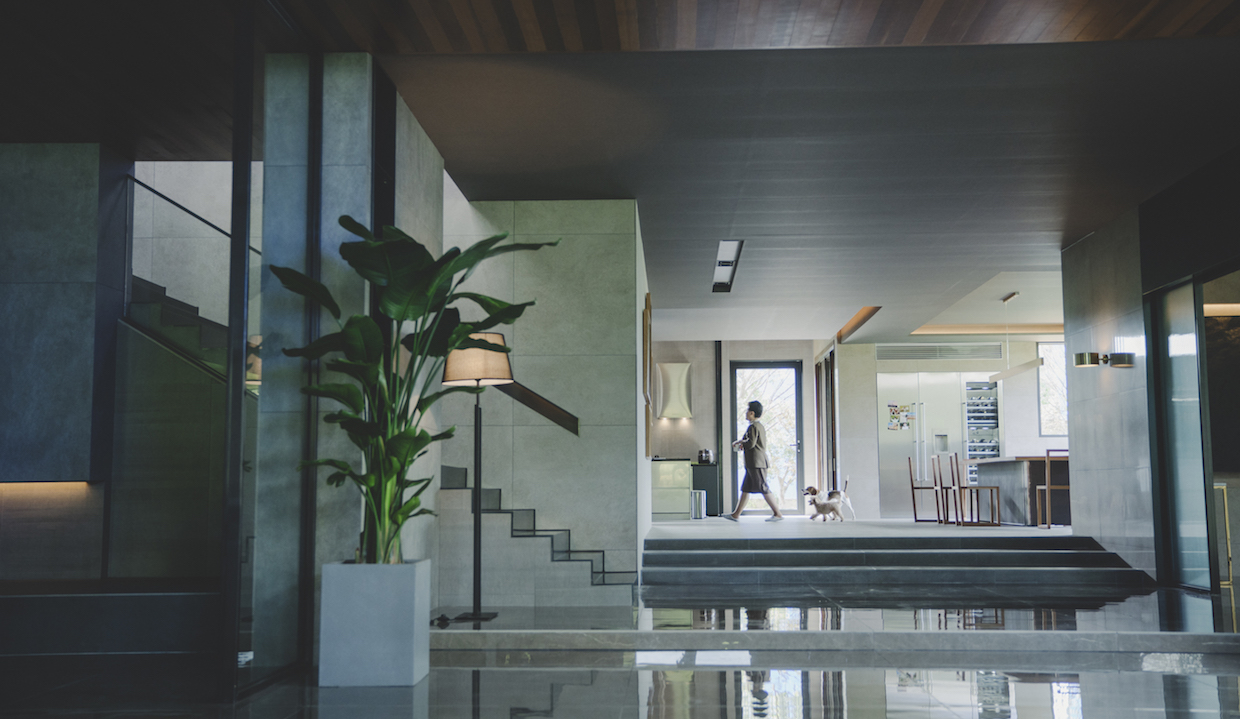 For P&I-accredited attendees without the scratch to make it to Berlin/Cannes/Venice (let alone Telluride, with its $780 cost of press entry), day one of TIFF is traditionally a marathon catch-up march through their biggest titles, often scheduled in competing Sophie’s choice slots, with the big-name world premiere titles coming later. All this year’s Cannes main slate awardees are in the program minus two (the pointed omissions are Jessica Hausner’s Little Joe and the Dardennes’ Young Ahmed). This year’s Palme d’Or went to Bong Joon-ho’s Parasite, which is fine by me: he certainly deserves some kind of significant honorific at this point. Bong’s career to date has, broadly speaking, two stages. Phase one (Barking Dogs Never Bite, Memories of Murder, The Host and Mother) was films made at home, their implications largely confined to the country’s own history (American imperialist presence doesn’t go unnoticed in The Host, but it’s not the primary target). The diagnosis, at its simplest, is that all is not well and South Korean history has yet to be reckoned with. Memories‘ protagonists are police officers whose attitude towards enhanced interrogation techniques is alarmingly enthusiastic, with a heavy background emphasis on ’80s military repression of student protests; deliberate historical amnesia is, metaphorically, Mother‘s ultimate subject. Bong’s second phase was going international, adding English-language performers and international financing for wider-ranging broadsides against capitalism, implicitly attacking the very financing forces enabling the work. Snowpiercer was extremely blunt class warfare—poor people at the back of the train fight their way to/against the rich at the front—and Okja no less so, placing its climax in NYC’s Financial District.

Parasite presents a pretty literal upstairs/downstairs class stratification, letting the gap widen until it’s not just merely inhumane but actually untenable. The underclass is represented by a family anchored by mildly feckless patriarch Kim (Bong regular Song Kang-ho). They live in a basement-level apartment where wifi is hard to come by, and the very beginning has them looking for a wifi signal—the one they were leaching off of now has a password, so they scurry around to find a few precious bars. I doubt the allusion is intentional, but it reminded me of The Wind Will Carry Us, whose protagonist spent a lot of time running up hills trying to get a cell phone signal to stay in touch with the office; 20 years later, we’re frantically “circling back and touching base” for the mere possibility of a temporary gig folding pizza boxes. At the top—again, rather literally, in a mansion on the hill—is a smaller family, headed by Park (Jang Hye-jin), some kind of hotshot executive or other. The wealthy are not actively/knowingly monstrous (although Park is only shown at work once, consulting on a VR project, almost certainly expresses, er, a “content-maker”‘s animosity to this field).

The entire family finds employment with the rich one under one false identity, and while it’s blithely assumed they can work overtime on a moment’s notice, they’re not proactively abused or demeaned—the wealthy couple’s snobbishness and ingrained ungenerous impulses are only expressed privately, to each other, which seems fair enough. As Bong has said of his desire for greater ambiguity, “I was tired of seeing rich people who were always bad and greedy and poor people who were always nice and helping each other.” But really, this is a pretty air-tight, thesis-driven scenario, which proceeds to demonstrate how the underclass are turned against each other, distracted into fighting over scraps under a narrative of false scarcity rather than identifying the true enemy, then build to the open class conflict that seemed inevitable from the get-go.

Bong discarding subtlety never bothers me, in part because I’m not disagreeing with his conclusions. In fact, nothing really bothers me about Parasite, whose predictably ingeniously plotted first half is a lot of fun. Bong’s one of the very few working filmmakers I’m enthusiastic about whose primary impulses are entirely predicated on tight narratives—he has a seemingly bottomless supply of twists without becoming sub-Shyamalan about it, his formal chops providing images and edits way better than serviceable. But his signature tonal scrambling—whiplash-inducing shifts from comedy to brutality, with zero transition time—doesn’t land for me here; the class diagnosis gets angrier while the emotional trajectory makes a last-minute swing for pathos, expressing a theoretical last-minute desire for nuance that’s hardly felt. Sometimes pure anger is more cleansing.

I felt nothing during Céline Sciamma’s Portrait of a Lady on Fire, which was also true of her previous Tomboy and Girlhood. They’re all scrupulously well-intentioned and remarkably uniform in their tepidity—admittedly, the dividing line between lukewarm and understated is more of a judgment call than most things, but consistent dullness unifies them. Fire stars Noémie Merlant as Marianne, an 18th century painter who falls in love with portrait subject Héloïse (Adèle Haenel)—a union that, given period norms, is not destined to prosper. Sciamma certainly shows her work, triple-underlining themes lest anyone miss them. There’s a discussion re: Orpheus and Eurydice about whether the possession of love or its memory is more desirable (foreshadowing!), a song where island villagers chant “non possunt fugure” (Latin for “cannot fly,” more foreshadowing), and—just to make things extra-clear—a shot of Héloïse literally on fire just in case the title metaphor wasn’t clear enough. When Marianne arrives at the island where she’s to meet Héloïse, the visual language is first handheld (because she’s on a boat in the water), then mostly static and locked-down on land as the painter adjusts to her new quarters: when artist and subject finally meet, there’s a long Steadicam shot obsessively tracking the latter to indicate that Everything Has Changed. I guess that’s visual storytelling.

Portrait is superficially plausible enough—performances credible, outdoor locations handsome, room tone carefully captured, etc.—but I was inexplicably bored and resorted to the exercise of logging the shot choices one at a time to figure out why. All I can really report is that the overwhelming majority of Portrait consists of either medium close-ups or medium shots deploying the easiest kind of symmetricity—lots of empty space in the background, little to create layers of depth, and precisely two shots that make use of offscreen space to surprise. The film opens with charcoal sketches on white paper, visually foreshadowing the main, white-wall space of the action, but there’s still nothing to really look at, besides the performances, which are fine except that there’s nothing of interest to playBy pointedly eliminating men from all but the very beginning and ending of the film, Portrait literally repels the male gaze while creating a ladies-only space (men are the extremely unmissed structuring absence), but it doesn’t have a compelling gaze of its own to substitute.

Sciamma won Best Screenplay at Cannes, while Pedro Almodóvar’s Pain and Glory scored Best Actor for his longtime collaborator Antonio Banderas, who gamely gives a shot at playing Salvador Mallo an aging director constantly racked with pains. (No matter how strenuously he coughs, any onsetting infirmity doesn’t quite scan, but for a nice reason: Banderas is still looking phenomenal.) Banderas as reflective auteur anchors Almodóvar’s pass at 8 1/2 et al. terrain, a series of flashbacks and vignettes that self-anthologize Almodóvar’s project. The Even More About My Mother section pays additional tribute to his late beloved mom (Penelope Cruz), scenes of Mallo as a child in a priest-led private school skirt memories of Bad Education, and a plot line that finds Mallo taking up a heroin addiction (for fun!) lead him to score on the street, invoking similar scenes from Tie Me Up! Tie Me Down! I’m of the opinion that Almodóvar was more interesting when his work was primarily designed to be fun, and that all the melodramas from the tone-switch of All About My Mother onwards are slow going (Talk to Her excepted—I’m reasonably sure everyone likes that one), and that opinion didn’t change here—the funny scenes are kind of funny, the pathos-laden ones mostly wet squibs.

What’s a little surprising is that this is his first effort that’s often technically lazy—the signature vibrant reds are here, but the project is lacking in charge. Early on, Mallo runs into an actress he hasn’t seen in years, and they sit down to catch up. Almodóvar goes for the most monotonous/intro film school coverage possible—shot, reverse shot, two-shot, repeat—and because the actual exchange itself is pretty dull, I amused myself by looking for continuity errors in the performers’ head placement, which is not a great reaction. All that said, Pain is worth seeing for one of Almodóvar’s best scenes in the last 20 years, in which Mallo is unexpectedly visited by ex-lover Federico (Leonardo Sbaraglia). Their shared ’80s were tumultuous, structured around Federico’s crippling heroin addiction and subsequent disappearance. He returns, fresh-faced and considerably better, with a wife back in Argentina. The scene runs an entire emotional gamut, from initial delighted reacquaintance to a platonic catch-up, the will-they-or-won’t-they tension finally acknowledged and paid off in a sweet, melancholic way—it’s a fairly devastating two-hander that takes its unhurried time to unfold, a self-contained incident all the more poignant for being unrepeatable.

Not a Cannes title, rather a Sundance straggler, Scott Z. Burns’ The Report tracks Daniel J. Jones (Adam Driver) in his decade-long struggle to first produce, then have released, a report on the CIA’s torture program from 2001 to 2006 in the face of active efforts by both the agency and the Obama administration to suppress it. This is billed as a procedural, a genre Burns nailed in his screenplay for Contagion. Modeling his shot compositions on frequent collaborator Steven Soderbergh (down to color-coding flashbacks to visually separate them from the main timeline), Burns’s second directorial effort is technically smooth enough but narratively clunky. This is, as billed, a just-the-facts procedural, to the extent that Jones’s struggle is presented strictly without any annoying scenes of home life or other facile attempts to humanize his struggle/emotional journey (i.e., no scenes of being berated by a partner for being too absent, though sometimes Driver raises his voice to indicate that he’s getting frazzled). But while Jones’s work was necessary, the reconstruction of this sorry recent period in American life offers no fresh insights, because proving the CIA is in permanent legacy of ashes mode is not hard. The dialogue is often baldly expository, most notably in this unwieldy sentence uttered by Jon Hamm: “Congratulations to you, head of the largest ever Senate intelligence investigation.”

Beyond being not much of a movie, this is, politically, a dubious project, essentially positing Dianne Feinstein (Annette Benning) as a politician in a tough spot who ultimately Did The Right Thing in helping get the report out to the world. The movie climaxes with John McCain giving everyone hell on the Senate floor, suggesting that what will save us is good old bipartisan reaching-across-the-aisle for the greater good of the country. In other words, The Report (which, interestingly, gives the Obama administration a harder time than W.) is the kind of moderate/centrist fare my Twitter feed despises—if Chapo Trap House or their fellow travelers ever give this movie a spin, they’ll give it podcast hell, and they won’t be wrong.