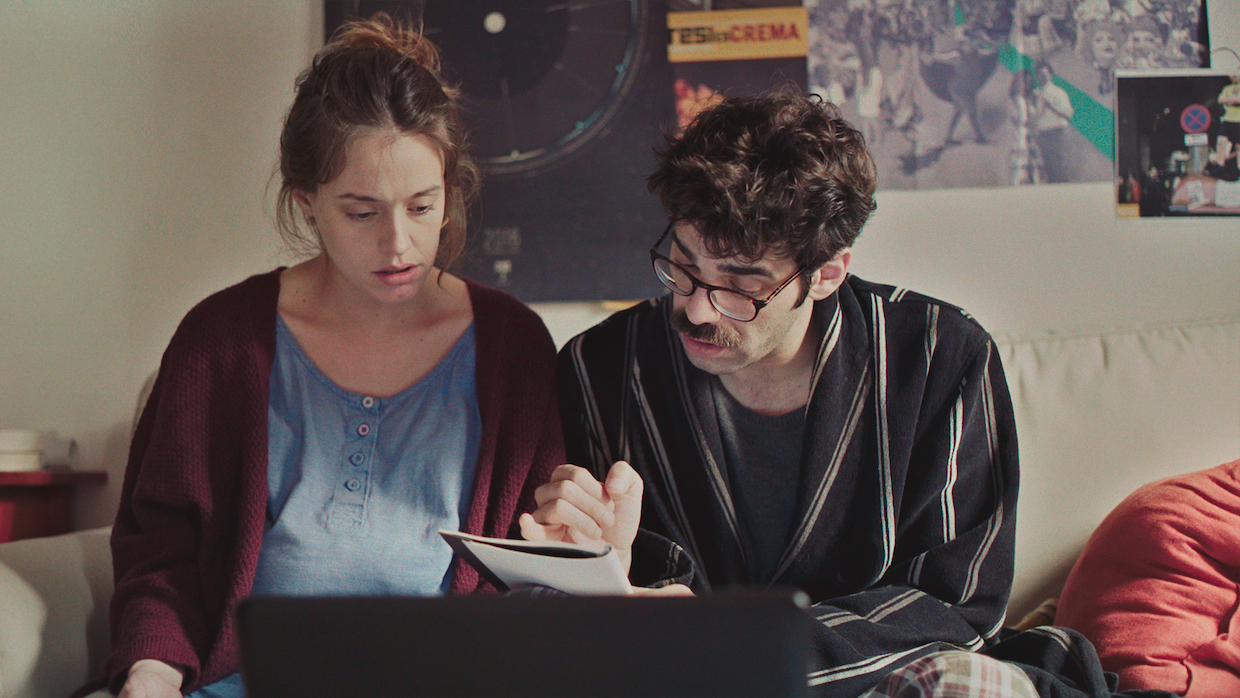 Maria Rodriguez Soto and David Verdaguer in The Days to Come

I’ve gotten to know the place pretty well over the past few years, as a regular visitor to AFF, and its indie-stoking U.S. in Progress program, but have been long overdue to check out New Horizons. It’s a whopper. For all its blue-chip auteur selections–the line-up duplicated about half the main slate of the upcoming New York Film Festival; yo, Parasite, what’s good?–the fest is an engine for discovery. That’s easy enough to infer from the banks of conceptual portraits of each edition’s directors lining the walls of the venue—mostly Europeans arriving with their first or second feature, and an occasional American, with alums that include Josephine Decker and Mike Ott. New Horizons also is attentively curated by theme, which allows programmers generous sway in pulling together wayward gems and tricky experiments that mess with boundaries of genre and form. Even within the festival’s categories, selections seemed to overlap. This year, sidebars—devoted to visual art, the body and “spirituality, magic and witches”—embraced risky approaches that, as often as not, put the filmmaker’s own actual ass onscreen and on the line, or, at least, demanded uncommon commitment from the cast in ways that also melted divides between fiction/non-fiction.

The extraordinary The Days to Come, from Spanish writer-director Carlos Marques-Marcet, monitors the confusion, joy and corrosive stress an unplanned pregnancy visits upon a pair of 30-something professionals whose seeming compatibility masks the potential for volatile disruption and communication breakdowns. The catch is that the two leads, David Verdaguer (star of the filmmaker’s previous 10,000 Km. and Anchor and Hope) and his real-life girlfriend Maria Rodriguez Soto are, in fact, a couple that is having a baby. While they play fictional characters and work from a script, the actors allow the camera access to scenes of raw intimacy that can’t help but be born of their actual situation. The set-up might seem a bit mumblecorish, with predominant handheld close-ups in messy beds, unsexy sex and intense dissections of relationship minutae, but there’s an ocean of emotional depth underlying it all. As the story accelerates towards the big moment, and the parents-to-be grow ever pricklier with each other, the movie also becomes a bit of a cliffhanger. How far are they going to take it? [Spoiler alert] Soto may be the first actor to have an emergency Caesarean in character.

Pregnancy and childbirth were thematic elements in multiple films, often in service to gonzo plot turns. In Divine Love, Gabriel Mascaro’s follow-up to the sensory rush of his 2015 Neon Bull, biological urgency has become an official matter of the state in a post-Bolsonaro Brazil. Low-level bureaucrat Joana (Dira Paes) plays amateur therapist for the unhappy couples whose divorces she is paid to notarize, luring them into the Party of Divine Love—a massive religious cult whose worship gatherings climax not only in spiritual ecstasy, but sacramental orgies of partner swapping against a throbbing magenta backdrop. Joana’s own marriage falters over a failure to conceive, until she does … and discovers that the father is neither her florist husband, struggling with his fertility, nor any of the faithful she’s bonked at church. Could it be … Him? The feverish, glow stick color schemes and familiar comic dystopian touches, plus abundant sweaty body parts, make for the carnal, funny Black Mirror episode that’s never been made, although for all its righteous intent and the looming mystery of its unseen, infantile narrator, the satire never quite rises to a knockout punch. Elsewhere along this continuum, New Directors/New Film alum Ala Eddine Slim keeps it weird with Tlamess, as an AWOL Tunisian soldier (Abdullah Miniawy, whose wordless performance hinges the film’s disparate halves) takes refuge in a deep wood, where he transforms into a hairy hermit/shaman—somewhere between Denis Lavant’s Mr. Merde and the Unabomber. A disenchanted rich man’s wife (Souhir Ben Amara), wandering beyond the gilded cage of her remote luxury home, falls his way: first as his abductee, then as his hypnotized accomplice. They communicate via telepathy. As she grows visibly pregnant, the story tilts toward mysticism, a cryptic black rectangle appearing to intercede in affairs as her captor’s breasts swell and we drift further toward the WTF finale.

Swedish writer-director Anna Odell also gives birth in the gender-bending house of games that is X&Y, if only to an “art baby,” an imaginary byproduct of a perverse, more-meta-than-meta group encounter session cast with some of Sweden and Denmark’s most familiar actors. In reconsidering the masculine/feminine divide, Odell has male and female performers portray different facets of her personality, and that of male lead Mikael Persbrandt—the tattooed “bad boy” of Swedish cinema, with whom the filmmaker, an archetypal “crazy artist,” hopes to stage an on-screen hookup (preferably girded with a strap-on … until Persbrandt’s agent steps in on his client’s behalf). It’s a bit like a send-up of Synecdoche, New York rewired as one of those Big Brother-style reality TV shows, as actors-as- themselves-as-other-actors role-play, screw around and suffer emotional breakdowns on a massive soundstage dotted with immaculately appointed tiny cottages. Meanwhile, nervous producers remind Odell she needs to produce an actual script. None of it really adds up, but it’s a fun watch, not least because Odell is a provocateur who never takes herself too seriously, and because her madly talented cast so relishes the occasion to pretend madness. If somewhere within this conceptual gamesmanship a viewer catches a bit of a Von Trier vibe (see: The Idiots, The Five Obstructions), New Horizons was happy to revive one of the Danish troublemaker’s inspirations: Anita: Swedish Nymphet (1973), the root of 2013’s Nymphomaniac, featuring a young Stellan Skarsgård in the familiar role as the confessor and would-be therapist to a compulsive libertine (Christina Lindberg,  now a Swedish journalist, who reminded the audience that she also was the model for Daryl Hannah’s eyepatched Elle Driver in Kill Bill).

Almost a half-century later, the Gen Z actors in Yung make Anita seem as pure as a Sunday School teacher, as they unabashedly romp through a contemporary Berlin of hard drugs, promiscuity and way too much techno, cooking up vats of GHB and paying bills via drug dealing and prostitution, while exploring various stations along the gender spectrum. It’s good to be a teenager! In performances that feel only a few inches distant from lived experience, the primary cast members (Janaina Liesenfeld, Emily Lau, Joy Grant and Abbie Dutton, who each share first names with their characters) float between ritual self-obliteration and age-old episodes of adolescent angst, aware of the steep risks they take yet somehow impervious to any real consequences. The feature debut of German writer-director Henning Gronkowski avoids any judgment beyond its subjects own self-assessments, expressed in interview segments from a faux-documentary within the fictional drama. Likewise, while the girls’ misadventures might foreshadow some looming tragedy, the other shoe never drops—a change-up from the film’s unavoidable template, Larry Clark’s Kids. What elevates the material are the close-to-the-skin performances, particularly from Liesenfeld and Lau, and the film’s knowing intimacy with its territory, even fathoms deep in the K-hole.