House of Cards, the Netflix Algorithms and Me 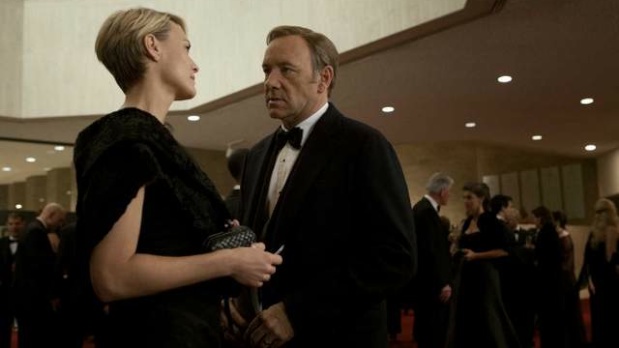 Robin Wright and Kevin Spacey in House of Cards

As I learned from a piece by Andrew Leonard at Salon, at 12:22 AM last night a Netflix event was created in my household when I switched off Episode Four of the streaming video giant’s new series, House of Cards, and went to bed. Leonard’s event was caused when he stopped midway into the show’s first episode, but I watched the first two back to back before a digital datapoint was created. That event was triggered by me pausing the show to make dinner, a moment presumably reduced in significance by my subsequent reengagement with the series. If I do not watch the rest of House of Cards, as I do not intend to, I have to assume, however, that the significance of the 12:22 event will only grow. What was it that caused me to stop watching here, to not reengage with the D.C.-set, David Fincher-produced tale of political intrigue, the algorithms will want to know.

Or will they even care? Perhaps the millions of other data points produced by viewers more satisfied with the show than me will toss my puny dismissal into a pile of digital noise. Maybe, though, the record of my finger on the pause button will aggregate with a meaningful sample of similarly inclined folks, prompting Netflix to focus its computational power on the show’s flaws three episodes in.

“How Netflix is Turning Viewers into Puppets” is Leonard’s piece, and it’s a fascinating look at the ways Big Data is shaping not only what we are presented with as viewers but, increasingly, what is being produced. As Leonard explains, by knowing when and where we as an audience watch, pause, and rewind a show, Netflix is aggregating data that may inform the practices of not only development executives but, in the future, producers, writers directors and editors.

The first step for Netflix was parsing subscriber data and then commissioning a show it believed its viewers would be predisposed towards. Writes Leonard:

For at least a year, Netflix has been explicit about its plans to exploit its Big Data capabilities to influence its programming choices. House of Cards is one of the first major test cases of this Big Data-driven creative strategy. For almost a year, Netflix executives have told us that their detailed knowledge of Netflix subscriber viewing preferences clinched their decision to license a remake of the popular and critically well regarded 1990 BBC miniseries. Netflix’s data indicated that the same subscribers who loved the original BBC production also gobbled down movies starring Kevin Spacey or directed by David Fincher. Therefore, concluded Netflix executives, a remake of the BBC drama with Spacey and Fincher attached was a no-brainer, to the point that the company committed $100 million for two 13-episode seasons.

I believe I have watched a British series on Netflix. I like David Fincher. I’ve been hot and cold on Kevin Spacey, but I liked him recently in Margin Call. And, who knows, maybe one night I tried searching for old episodes of Wise Guy, where Spacey burst on the scene as half of a villainous couple with Joan Severance.

But what about the things that have put me off the series? Like its insufferable use of direct address — Spacey turning smugly to the viewer with an underwritten bon mot following his dispatching of yet another minor adversary. In my years of Netflix viewing, did I watch Alfie, or Ferris Bueller’s Day Off, somehow convincing the company that I’d be partial to this usually cringe-y device? Indeed, while second-screening last night, I laughed my ass off at the following tweet:

#HouseOfCardsSpoliers In episode 13, Kevin Spacey ends season by turning to camera and says “Now THAT, was a house of cards” #houseofcards

Or, does Netflix know that I grew up in D.C. and interned for a summer on Capitol Hill, where I wandered those same corridors? Yes, that was a long time ago, dinosaur years when it comes to politics, but there still seems something off to me about the show. (Soderbergh’s K Street did it better.) Has Netflix somehow matched me to my IMDb and discovered I once produced a movie co-starring Kate Mara, and does it know that I’m marveling that she seems not have aged?

Or are its computers sophisticated enough to glean my biggest complaint, that Spacey’s majority whip is presented as the craftiest guy in the room, a Machiavellian schemer whose backhanded ploys reduce grown men presumably skilled in the rough-and-tumble of contemporary politics to bumbling fools?

“The database as reality ideology,” is what Jaron Lanier calls the rule of the algorithm in his You Are Not a Gadget. Throughout the book, he discusses the flattening out of our quirks, desires and humanity as Big Data builds and regurgitates to us its own vision of who we are and what we like. (Lest you think this phenomenon is specific to only Hollywood film, then check out Alicia Van Couvering’s “Death by Twitter, Computers vs. Brains.” Big Data is everywhere now.) I couldn’t help but think of Lanier as I read Leonard’s article. On paper — or in the Netflix data banks — I may be House of Cards‘ perfect viewer. But, as you can see, my reasons for, so far, disliking the show are vague, personal, almost inchoate. Hard to quantify.

Maybe I should continue with House of Cards. There have to be worthier adversaries in the next nine episodes, to say nothing of more devious plotting. I wonder if the algorithms will care if I don’t stick around to find out.