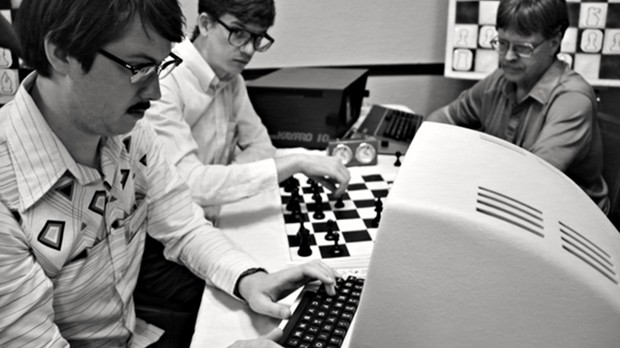 You are at the premiere of your own film. The screening is packed. The credits begin to roll…and 500 glowing screens appear in the darkness. You sit there, watching the phones, helpless as strangers and bloggers decide your fate 140 characters at a time. Perhaps the Variety critic delivers the first blow: a decisive mediocre. The indieWIRE stringer declares the audience underwhelmed, #sundance. At a party that night, people tell each other that they heard the movie was “only OK.”

In the olden days, crowds of press and industry would gather outside the theatre to discuss their thoughts and settle on a consensus. But that gossip was analog, ephemeral… human. Filmmakers at Sundance today must accept the hegemony of the Twitter hive mind. All around you swirls a gigantic, amorphous computer brain, and it controls your future.

The relationship between computers and brains is the subject of many films this year. Take, for instance, Andrew Bujalski’s Computer Chess, the story of a 1980s tournament between computers programmed to play chess. Shot on vintage black-and-white tube video cameras in 4:3 aspect ratio, it’s a far-out, highly cerebral comedy about the soul, sleep deprivation, pot, acid, EST group therapy, cats, the military industrial complex, and of course, computers playing chess. One major plot point concerns Patrick, a painfully shy young programmer whose system (“Tsar”) begins to commit strategic suicide during games. Desperate to resolve the problem, he seeks late-night help from the lone female programmer at the conference. Together, they wheel the igloo-sized PD-11 to her room, where, after a series of experiments, the fundamental question arises: does Tsar want to play humans instead of other computers? The two humans stare at each other, unable to connect, discussing what their computers want. “One day, we’ll use computers to date,” jokes another character later in the film. Everybody laughs.

Oh, quaint it all seemed on the eve of 1984. Yet the publishers and authors in the documentary Google and the World Brain seem equally quaint speaking in 2013. These are the humans that banded together to fight Google’s attempt to digitize all books in the world, without regard to copyright (more than 20 million books are in their cloud already). Eventually, a New York State court told Google to stop their scanning blitz; the humans won that battle. But the film leaves you with the sense that computers will almost certainly win the war.

Inventor Ray Kurtzweil appears liberally in Google And The World Brain. Kurtzweil coined the term “The Singularity” – aka, the theoretical emergence of superintelligence through technological means, per Wikipedia – and he is a notable advocate for the inevitable computer-brain mind-meld. (Speaking of movies, Google has recently hired him to design the closest thing the world has seen to the all-knowing Skynet from The Terminator.)

Sundance programmer Shari Frilot admits to organizing the New Frontier section around some of these ideas. “I thought a lot about the Singularity, and how we preserve our humanity in all of this,” says Frilot. New Frontier is Sundance’s home for video installation, “web-native” work and the festival’s more experimental features. The program has long been concerned with the ways that we engage with digital media, but this year, every piece either wraps you in a screen or puts your body on the walls. One installation takes your finger print, projects it on screens around the room, and makes it pulse to the beat of your heart; another “infects” your phone or ipad with a self-styled music video that “hacks” your device. CORAL: Rekindling Venus immerses you in a “full dome” experience viewable at a planetarium near you; North of South, East of West requires swivel chairs to watch, as you’re surrounded on all sides by screens with competing/complementary narratives. “It just felt time to do a show like this, given that we’re all so consumed by our cell phones,” says Frilot. “What does it mean to bring the body along as we integrate the fibers of our body into the digital landscape?” 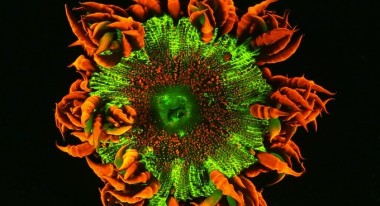 Rage against the machine continues in Randy Moore’s Escape from Tomorrow, a project that benefitted hugely from the twitterverse rumor mill, which exploded after its first screening Friday evening. The story of a Dad losing his mind in the circle of hell / alien invasion headquarters known as Disneyworld, it’s like if Tarkovsky directed an episode of The Simpsons, featuring demon children, invasive alien flus, Disney princesses-as-high priced escorts, leggy French fairies and explosive diarrhea. It is a deeply insane movie about the deeply insane experience of corporate entertainment. It was filmed without permission; Disney learned of the film’s existence from the Internet along with everyone else. Moore will almost certainly be caught in a maelstrom of litigation, and knowing that makes watching the film all the more poignant: it’s a suicide mission, a kamikaze missile aimed at a mind-bogglingly powerful corporate machine guaranteed to crush us all. 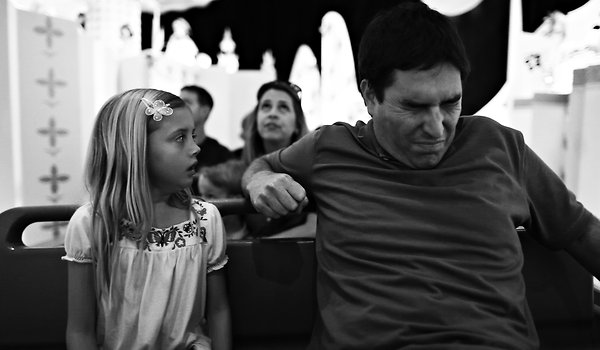 Nerves beginning to fray in Randy Moore’s ESCAPE FROM TOMORROW

Though it’s thrown into public relief at Sundance, the movie business as a whole operates as something of a hive mind. People refer to “the town” like it’s a single company, with universal opinions and a shared reading list. “Everyone in town” reads the same scripts on the same weekend, tracking boards light up with information that filters its way to Deadline.com in minutes. A festival acceptance brings almost total certainty that somehow, even though you didn’t send it anywhere, 100 agents will have watched a DVD of your film before it premieres. Then, when a film finally does come out, Rotten Tomatoes uses an algorithm based on keywords to tell the world whether or not to see it.

From the monk-like nerds of Computer Chess through the futurists of Google And the World Brain, programmers and theorists have always had the same anxiety: when collective machine thinking begins, will individual human thinking change forever? It’s easy to think of the Twitter hive mind as human – nominally, tweets do come from people. But don’t be fooled. The hive mind is a computer, and as such, it has no consciousness; it never deviates from its predetermined code. Thus, it is necessary for viewers to ask themselves a single question, ask it every time their iPhone vibrates with gossip in a dark theater: is my brain really responding to this film….. or is the hive mind telling me what to think?