‘100 Percent It’s Not A Fad’: Jon M. Chu And Other Asian-American Creatives On The Post-‘Crazy Rich Asians’ Bump 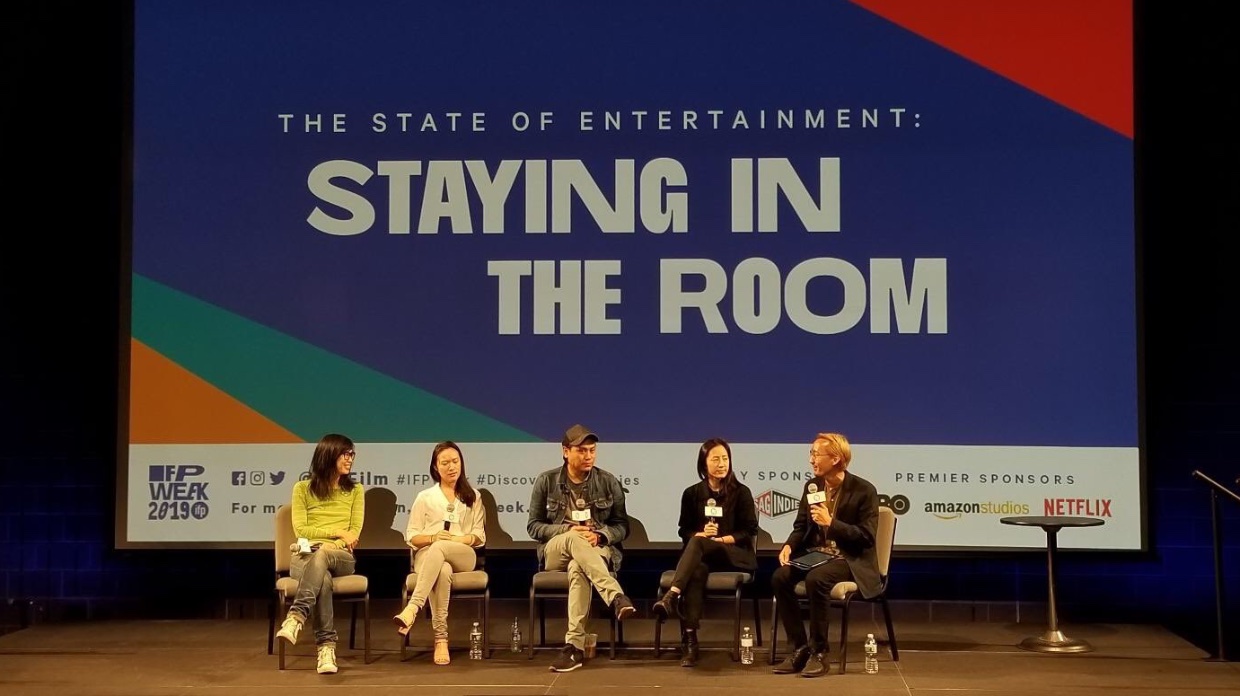 The IFP Week 2019 panel “Staying in the Room,” which brought together four Asian-Americans involved in the entertainment industry, happened the weekend of two milestones. For one, Hustlers, co-starring Crazy Rich Asians’ Constance Wu, overperformed, nabbing the top spot at the North American box office. The other was news that comedian Bowen Yang was named the first Asian-American to be cast on Saturday Night Live, ever. The latter was overshadowed by footage of another new SNL hire, Shane Gillis, saying racist stuff about Asians, including a slur that was presumed to have died out with the last generation or two. But apart from some obligatory venting — “Yeah, f— that guy,” quipped big time Hollywood director Jon M. Chu — the panel tried to keep their eye on the prize, focusing on Yang and offering cautious optimism at a time when Asian-Americans have more of a hold on the culture than ever before.

The panel were cautious because they don’t have to go back too far to recall when Asian-Americans had almost no power in the industry. Alice Wu — whose indie Saving Face, a romantic comedy about a Chinese-American lesbian, was the first of its kind back in 2005 — didn’t even bother attempting the usual road to Hollywood success.

“It never occurred to me that I could be in the arts,” Wu admitted. As the first-generation daughter of immigrants, she took a traditional path, majoring in computer science and working in that field through most of her 20s. After taking a weekend workshop that led to a screenwriting program, she wrote Saving Face. She then saved enough money, quit her job, moved to New York and gave herself five years to make a movie. Her deadline hit during the first week of her shoot.

It still took her five years to make it happen. “It’s an Asian-American lesbian comedy of manners that’s half in Mandarin. Who thought that would get made?” she joked. She thinks that not being a Hollywood type inured her from letting rejection and disappointment throw her off. “People said, ‘This is a great script but you’ve got to cast white people.’ I got a lot of ‘It’s got to be Reese Witherspoon as the daughter and Ellen Burstyn as the mother.’ And I kept thinking, ‘If I just want to make money I’d stay in computer science.’”

Saving Face — as well as films by future Fast and the Furious auteur Justin Lin, notably the all-Asian indie thriller Better Luck Tomorrow — inspired many to get involved in the business. Among those was a young Christina Chou. Her family used to drive three hours, from Urbana-Champaign to Chicago, to see those films. They made her want to get into the industry, just not as a filmmaker.

There’s a stronger sense of community amongst Asian-American creatives than ever before, but for the longest time everyone was on their own. Today, the writer Teresa Hsiao is the co-creator of Awkwafina is Nora from Queens, the now titular (and now ubiquitous) comic, rapper and actress’ forthcoming Netflix show. But she remembers her first writers room gig, working for Family Guy. “There were like 20 white dudes and two women,” Hsiao recalled. “In one sense they were like, ‘Oooh, somebody different, that’s cool.’ It was nice to have a different voice. At the same time, when you’re pitching jokes to guys who’ve been there for a long time, there’s a bit of a barrier in terms of your cultural touchstones and references.”

In terms of box office, Chu was the biggest person on the panel. His feature directorial debut was Step Up 2: The Streets. He’s also made Step Up 3D, two Justin Bieber concert movies, the second G.I. Joe film — the one with the dynamite “ninja mountain” sequence — and the second Now You See Me. None of those were predominantly or sometimes remotely Asian-American in theme or even in cast. That changed with last year’s Crazy Rich Asians, the first studio film with an all-Asian cast and director and one of 2018’s biggest hits. Its success is one of the reasons this panel exists at all.

But again, Chu wasn’t trying to make films about his ethnicity until very recently. He had no problem getting his foot in the door. But once it was in, he knew his options were limited. “It wasn’t somebody saying to me, ‘You can’t be a director.’ It was, ‘Once you’re in the gang, you can’t make these people your leads,’” Chu recalled. He was told it wasn’t just American audiences but international ones who wanted to see American faces. “That gets into your head and you believe it. That’s how you stay in the studio game. I didn’t have the experience or the confidence in who I am, because you have to camouflage it. I just wanted to be a filmmaker to be a filmmaker; I didn’t want to make some big statement in my movies.”

He said the shift in his perspective happened about five years ago, partly when he began questioning whether anyone could have directed the films he had, and when he began watching young filmmakers on YouTube, like Wong Fu, who told specific stories about their experiences in fresh and exciting ways. There was also a growing number of Asian-Americans breaking into the industry, from The Daily Show’s Ronnie Chieng to the cast and writers of Fresh Off the Boat. Suddenly Chu, who felt alone in his community growing up and did not relate to most depictions of Asian-American life, finally felt connection with others who’d undergone similar but different experiences. What’s more they were collectively finding success at the same time. “We were all rising together, and it seemed like the dots started to connect.”

By the time Chu read the Crazy Rich Asians novel, he was ready to pounce. He identified with the story of a Chinese-American immigrant who visits Southeast Asia for the first time. “I remember going to Taiwan for the first time and feeling all the same things,” Chu said. “It feels like you’re home and people treat you like a son or a cousin. And then all of a sudden they turn and call you gweilo. You realize, ‘Oh, I’m not a part of this either.’”

Chu — whose next film will be an adaptation of Lin-Manuel Miranda’s In the Heights, with a largely Latinx cast — will not take credit for all that will follow in the wake of Crazy Rich Asians. “We were the result of all the work that was done before,” Chu said. “We were the first studio film done with an all-Asian cast, but we’re definitely not the only one in the last 25 years. So many great movies, some by people here, have pushed the boundaries and kept the conversation moving. We were just at the right place at the right time. All these actors had been in enough stuff and done the right things, so when they go on Jimmy Fallon they kill it. They weren’t green. They knew how to do it because they’d been doing it their whole lives.”

There’s mixed feelings about the idea that Crazy Rich Asians has led to a belated industry-wide renaissance — as though it’s disturbing that one single film can change the tide. What would have happened had it tanked? Wu — whose belated follow-up to Saving Face, the high school rom-com The Half of It, is due on Netflix early next year — remembers the fall-out from All-American Girl, the mid-’90s sitcom revolving around Margaret Cho and her Korean family, which lasted but one season.

“Because that show didn’t do well, for 20 years if you tried to pitch something they would go, ‘Well, you know, that show with Margaret Cho didn’t do well.’ Really, one show didn’t do well!’” Wu vented. She feels it wasn’t fair to pin all hopes on Crazy Rich Asians, even if it worked out in the end. “Everyone was like, ‘Let’s see how this does.’ That’s a lot of pressure. The reality is that because of its success, it really is an all-boats-rise situation for the community.”

Wu is up for going further: “I think an all-Asian-American In Living Color would be pretty cool.”