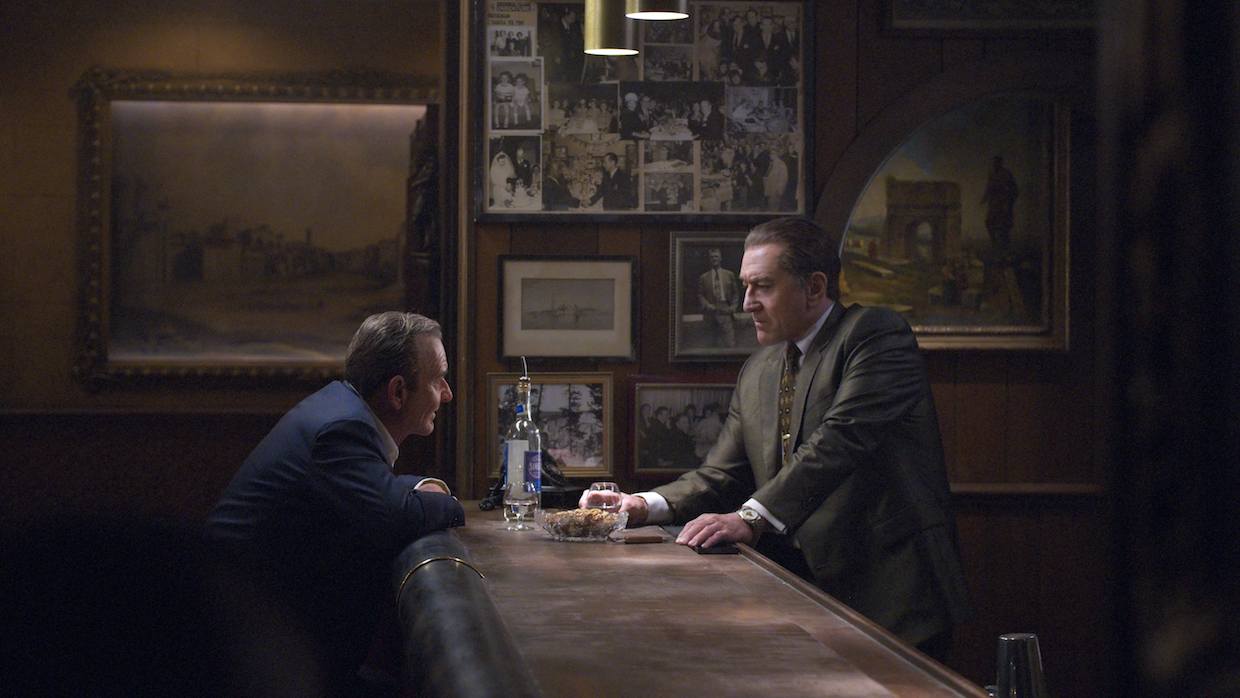 Joe Pesci and Robert De Niro in The Irishman

The opening shot of The Irishman* is a signature Steadicam glide through a nursing home soundtracked by doo-wop (The Five Satins’ 1956 “In The Heat of the Night”), slowly making its reverential way to an close-up of Robert De Niro—a suitably majestic re-introduction of both the actor as persona and his character, hitman Frank Sheeran. Sheeran lived until 2003, and (minus one brief WWII combat service flashback) the film picks him up sometime in the early ’50s. If the opening shot is as close to the present day as possible (2003, I hate to remind you, was already 16 years ago), the time between the sound and image covers the maximum distance between one man’s early 30s and final days, a gap the rest of the film traverses and eventually collapses.

Maximum-age De Niro faces the camera in a wheelchair, remembering his life in direct address. He begins his reminiscences with memories of a 1975 road trip that would end (hypothetically, not confirmed by the FBI) with his killing Jimmy Hoffa, a throughline that’s returned to while the film flashes back to the post-war beginnings of De Niro’s criminal career. That narrative will inevitably lead up to the Hoffa hit, after which the film takes a mournful march through Sheeran’s remaining life very nearly to the grave. The years of vitality occupy most of the running time, then time starts dilating: what remains is the death of all one’s friends, intense personal reckoning with decades-old regrets, buying a casket from Action Bronson (even in the midst of arguably the single most sustainedly sad half-hour chunk of his career, Scorsese’s bit part casting sense of humor abides) and waiting for the end, which arrives faster and faster—the final days leap time more rapidly, with more ground covered from shot to shot.

The vast majority of The Irishman‘s running time is a shaggy mob comedy, closer to style in Wolf of Wall Street than not. Sheeran’s rise to proximity to mob royalty is enabled by the long-awaited return of Joe Pesci. His character is Russell Bufalino, but although the typically tangled web of eccentrically nicknamed mobsters is close to the convoluted historical record, the characters are inevitably less important than the actors performing them. Joining Scorsese’s core group of De Niro, Pesci and Harvey Keitel, Al Pacino is both Jimmy Hoffa and, inevitably, late-period Pacino—actually somewhere in the middle of the very special personal scale of performance he’s created for himself rather than whole-hog, though still sometimes whipping out an accent of some sort I couldn’t place. These performers repeatedly converge with a stacked supporting cast, preferably playing out their interactions with no more than two to four people at a time at a leisurely pace. There’s a “let it roll and edit it down to the best bits” vibe that, like Wolf, reminded me of Judd Apatow, and a lot of it is very funny.

I enjoyed The Irishman, which, as has already been noted, is definitely an Old Man Movie, moving at an unhurried pace but never boring. There is a core at the heart of the film that eludes me, which is why I’m placing it at the second tier of Scorsese for now. The killing of Jimmy Hoffa**, the peg of the whole project, is also supposed to be the kind of betrayal of friendship that makes the whole idea(l) of meaningful personal relationships meaningless. It’s something Sheeran tries to stop from happening the whole movie, and it’s clear that this superhumanly stoic killer is, for once, bothered by this potential death, but I had no idea why—his relationship with Hoffa throughout is basically that of a subordinate alternately bemused and exasperated by a needlessly volatile superior, which doesn’t seem to translate to higher claims of deeper emotions.

As a movie about aging and death made by a director and core collaborators who have aged into the present since 1973, The Irishman is inevitably affecting. I don’t have much to say about the de-aging technology (it looked fine to me, honestly, but I don’t have the closest technical eye for these things). But, as Bilge Ebiri has noted, it’s less about the faces than the bodies they’re moving on: “At the post-film press conference, [Scorsese] and Al Pacino told a story about shooting a scene in which Pacino had to get up from his chair during an angry tirade about John F. Kennedy. Scorsese said he did a couple of takes, both of which looked great, and was ready to move on when his camera people and technical advisers reminded him that the 79-year-old Pacino’s character was supposed to be 49 in the scene. So the actor had to do the whole scene again, making sure to move like a much younger man.” We’re watching characters decay over five decades (though many don’t live long enough to have that option) in just under three and a half hours, and I don’t know who wouldn’t be moved by that.

* The title card is I Heard You Paint Houses and unless that title card is changed that’s what the movie is called and I don’t care what it says on the marketing materials. ↩

** Calling it now: almost certainly some tool over at Breitbart or related parts is going to deliberately misread this movie as a stinging indictment of union corruption and the importance of passing right-to-work laws. This will be wrong, but it can’t be stopped. ↩