Watching Blue Velvet in the Land of Borges 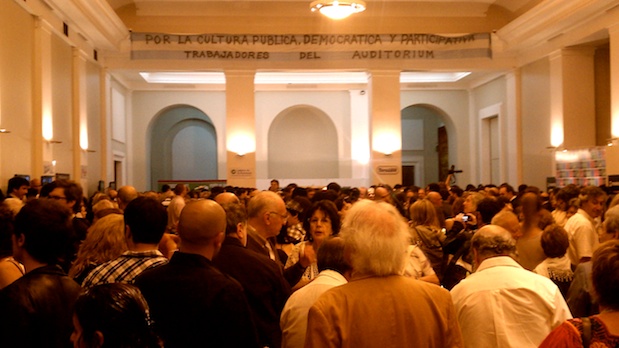 In Jorge Luis Borges’s story “The South” the narrator notes that “every Argentine knows that the South begins at the other side of Rivadavia.” And this is where I found myself last month, in a city called Mar Del Plata, for the 27th Mar Del Plata Film Festival, hundreds of miles south of Buenos Aires, where I had been invited by Pablo Conde to attend the book launch of a Spanish translation of The Blue Velvet Project, which originally appeared here at Filmmaker from August 2011 to August 2012.

Where I was, among generous, film-loving people, everything hovered on the edge of fact. Blue Velvet (“Terciopelo Azul”) had not played on the big screen in Argentina during its initial theatrical release, being available only spottily on VHS and, later, DVD. And yet still I was overwhelmed that approximately 600 people crowded into the Sala Astor Piazzolla. I, too, had never experienced Blue Velvet on the big screen, and as the red drapes opened to reveal the blue drapes, and Angelo Badalamenti’s Shostakovitch-inspired, formalist score prefigured the endurance not of goodness in the world, but of evil, evil in all its disguised and deliberate forms, the audience hushed and then clapped. And it seemed, in those opening moments, as if it was not us who were watching the film, but rather that it was the film that was watching us. There was a vague sense of danger, as if across decades and across continents, Blue Velvet still possessed a predatory power.

For a terrible moment, during the opening credits, I understood the fear of Dahlmann in the Borges story who finds himself in a bar alone with strangers in the middle of a vast Argentinian plain where, unaccountably, the train he has been riding in has stopped:

The tough with a Chinese look staggered heavily to his feet. Almost in Juan Dahlmann’s face he shouted insults, as if he had been a long way off. His game was to exaggerate his drunkenness, and this extravagance constituted a ferocious mockery. Between curses and obscenities, he threw a long knife into the air, followed it with his eyes, caught and juggled it, and challenged Dahlmann to a knife fight.

I forgot to say: just before the film began, Pablo came onto the stage unexpectedly, and invited me up, with no advance warning, to say a few words. Here was I, the gringo from Michigan, and so I seized the moment and spoke the truth: that, after a year of studying Blue Velvet frame by frame, it has become more, not less of a mystery to me. I retreated back to my seat, sunk into the dark, and experienced the film through the eyes of a nation that had suffered terribly during Argentina’s “dirty war” of the 1970s, and the forced “disappearances” of tens of thousands, and the suppression and the torture which resulted, as Pablo reminded me, in the military cancellation of the Mar Del Plata Film Festival during those years. 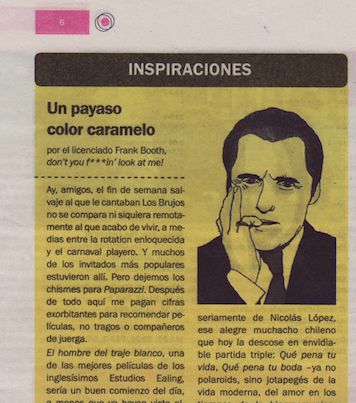 This was on my mind, like black oil, as Blue Velvet unfolded. I was haunted by the “annihilation decrees” and the names of the men who, in 1976, after the coup against Isabel Perón formed the military junta: General Videla, Admiral Massera, and Brigadier-General Agosti, and Henry Kissinger’s message to the junta that “the quicker you succeed the better.” So, in this context, the appearance of Frank Booth (Dennis Hopper) on the screen signified something vastly different than it ever had before. For here was a dictator of the mind and body, a torturer, a total-war fascist against the body of Dorothy and the mind of Jeffrey, and his popularity (see his column in the film festival newspaper) in Argentina seemed to me, as an outsider from North America, with the limited yet painfully deranged perspective that only an outsider can bring, that Frank in some terrible way fulfilled and maintained the fantasy of dictatorship.

“Let’s fuck! I’ll fuck anything that moves!” Frank declares at Ben’s Place, before impossibly and supernaturally vanishing from the screen in Blue Velvet’s most radical edit. The one that leaves you breathless, no matter how many times you’ve seen it. (And then you find yourself writing like Lester Bangs, at an impossible speed, trying to keep up with the flow of the moment, the sheer force of images that come at you in this 35 mm print at 24 fps, and you realize that the problem with writing about film is that it’s overwhelming, totalizing, and that the rudimentary, fundamental fact that it does not stay still—unlike, say the words in a novel or a painting—means that, as a writer, you are competing with motion itself.)

And then, against your best instincts, your are drawn into the movie once more, the drip, drip, drip, of seduction, and you are now borderless, neither a North American nor a South American, cut-off from Detroit and Filmmaker and your students. You are simply a man in seat in a theater that could be anywhere and the part of your brain that is a film professor shuts off, lights out, as it should. Although you know that Blue Velvet’s images are projected onto the screen, they seem somehow to be broadcast from behind the screen, thrust out into the world. When Dorothy appears completely naked in front of Jeffrey’s house, and Mike says to him, “Who’s that? Your mother?” the audience laughs, a shared laughter that breaks the tension. Watching Blue Velvet alone or with a small group, I had never laughed at this line before, and yet here, in the context of this auditorium, it truly was funny.

No one wanted the film to end, and yet everyone wanted it to end so that they could talk about it. For many in the audience, it was their first time seeing the film. People lingered through the closing credits, and then spilled out into the massive lobby. Blue Velvet, it seems, is a film haunted by its own inevitability. Near the end of the Borges story, we learn that “Dahlmann bent over to pick up the dagger, and felt two things. The first, that this almost instinctive act bound him to fight. The second, that the weapon, in his torpid hand, was no defense at all, but would merely serve to justify his murder.” The robin at the end of Blue Velvet fulfills Sandy’s dream from earlier in the film, but only in a glancing way, for the bird itself is mechanical.

It was well after midnight by the time the audience dispersed into the Mar Del Plata night, a cool breeze coming in over the ocean, the moon shining like some terrible warning signal. The couple walking in front of me suddenly held hands, and dashed ahead, as if to seek shelter.

(Top photo: the audience before the Blue Velvet screening at Mar Del Plata.)