Considering Microbudget: Six Filmmakers on The Reasons Behind Their Cinema Povera 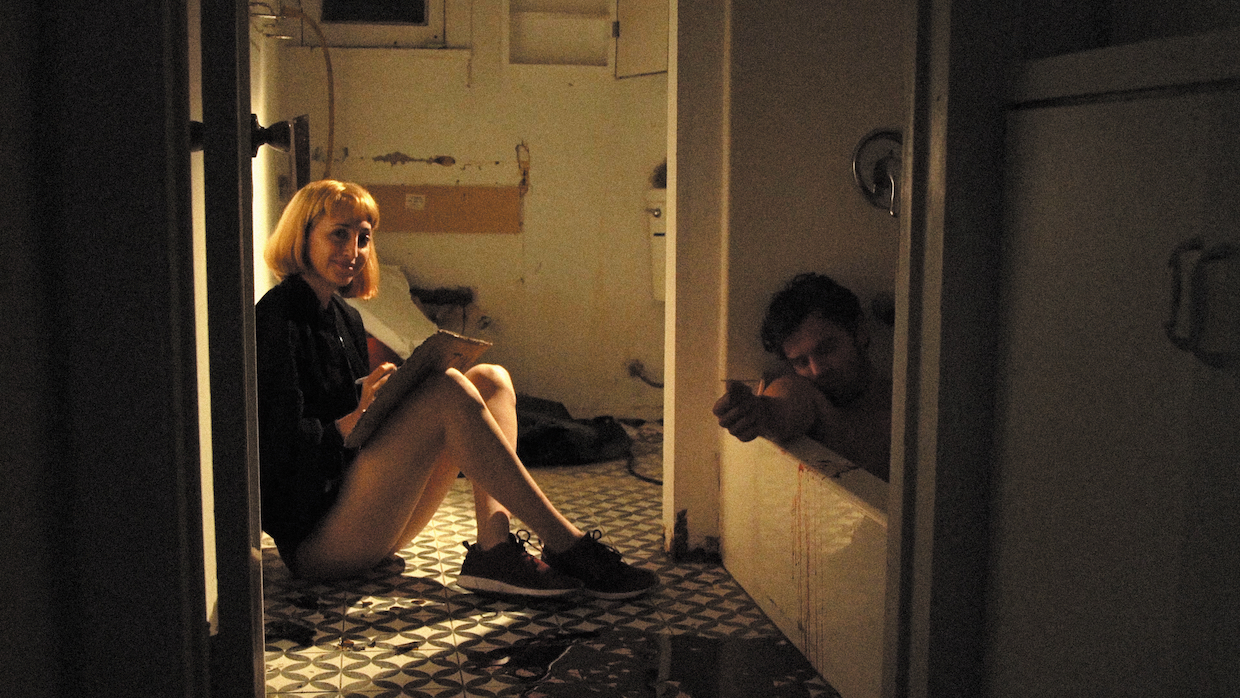 During its early years in the mid-1990s, Filmmaker was noteworthy for its coverage of microbudget, or “no budget,” production. In articles by Peter Broderick, we printed the budgets of films like Clerks, El Mariachi and Clean, Shaven, as well as—later in a cover story I wrote—Pi. Microbudget filmmaking has continued as a Filmmaker focus, although the degree to which our articles have focused on budget numbers has varied.

To accompany Mike S. Ryan’s article on microbudget productions, we asked several filmmakers whose work has been made in ultra-low-budget conditions to
articulate for us their reasons for working in this model in 2020. We asked them three questions:

One of 2019’s 25 New Faces, Jessie Jeffrey Dunn Rovinelli premiered her narrative feature So Pretty at the Berlin International Film Festival, with the US premiere at BAMcinemaFest.

As a preamble, I want to state that I’m not a fan of the term microbuget, as I think it implies a distinct break from the rest of the filmmaking world that in no way needs to be reflected in the final product. I make my films according to the same quality levels and assumptions that larger-budgeted films do. Microbudget can be an excuse or a marker of difference, and neither interests me much.

1 — I’m not committed to microbudget, nor am I interested in the term—it’s about making a film according to the resources available. A producer once told me, “Set a date to shoot, and whatever money you have then, you make the film accordingly,” and this was revelatory. Working and creating art, ultimately, is the goal, rather than becoming stymied by issues of capital that so often prevent new forms of art.

2 — Distribution, again, is simply based on what is available, focusing on immediate possibilities and taking advantage of them and giving a film time to find an audience. We’re at a bit of a juncture in film production and distribution, I think, where production and distribution are getting increasingly polarized in budget extremes, and art film, I think, hasn’t learned how to get films (and, more important, what films) to younger audiences. There’s a lot of thoughts about alternative distribution models, but I think ultimately this misunderstands the desire for new types of filmmaking that speak for our contemporary moment. We don’t need radically new distribution models, we need new filmmaking styles and courage from distributors to help them find their audience. Lower budgets become a way to make those films in a risk-averse environment.

3 — I deal with labor costs in terms of the world I want to build—it’s a huge benefit of truly independent production. I also make sure to always treat a film as a job for those involved, without trying to hide behind the words “passion project.” Everyone working on So Pretty, regardless of position, received an exactly equal day rate. Everyone on [my documentary] Empathy received an equal portion of net profits. That parity was important to me, as it of course is so rare. I wish we had more money to give, though!

1 — For Slow Machine, a microbudget “model” was appropriate because we wanted to be able to control the means of production as tightly as possible. We wanted to work small because (1) we hadn’t directed a feature-length movie before, and (2) we wanted to create as intimate and focused a space as possible for the performers in the movie, without too much of the multiple-moving-parts confusion that can characterize more traditional movie sets. We also didn’t want anyone telling us what to do.

2 — There isn’t really any traditional distribution route for a film like ours, from what we can tell. A best-case scenario is a healthy festival life and some kind attention from critics, followed by… well, who knows? Some version of a theatrical run is the dream—we’re old-fashioned that way—and we’re happy about the preponderance of venues in New York (Spectacle, Metrograph, Anthology Film Archives) where we’ve seen “small” movies such as ours on biggish screens. There are a lot of really good programmers out there who are willing to take risks despite a generally conservative marketplace, and that’s heartening.

3 — We didn’t pay people nothing, but clearly we had to be upfront with everyone right from the beginning about the financial limitations of the production. It was then our obligation to create a space that made performers and crew feel like real participants in what we were all doing—make this with us, not for us. We also knew that our schedule had to be flexible enough to accommodate the people we were working with, which is why the film took so long to shoot. Everything was as elective as possible, and the mood on shoot days was good—chill but rigorous. We like to think it’s because people actually wanted to be there.

Ricky D’Ambrose is one of the 2017 25 New Faces of Film. His most recent feature, Notes on an Appearance, was released by Grasshopper Film.

1 — I’d like to be able to work in a slow, concerted way on the things I care about, and this typically means forgoing money: The traditional sources of independent financing (private benefactors, equity investors, rich families) are by and large inaccessible to me and to many other filmmakers in this country. They’re also beholden, in a coercive and diminishing way, to profits and speed. In filmmaking—a thankless and penny-pinching enterprise—money is censorial. There is a powerful and terribly disabling idea that while a $2 million picture always concedes to the investor’s pocketbook, a $5,000 picture concedes to no one [because] such a film cannot exist at all. (A variant of the old admonishment to put up or shut up.) But I want to continue to work freely, with the people I like and respect, on the films that I choose.

2 — I’m not sure. I will say I’m fortunate to have worked with Ryan Krivoshey, Nick Newman and Marc Nemcik at Grashopper Film, who distributed my first feature and gave me considerable leeway in designing the film’s publicity materials. But as most of my films are shorts, their distribution life has been limited to festival screenings and, in at least one instance, time-limited online premieres.

3 — With the exception of my first four short films, nearly all the people who’ve worked on my films were paid, although admittedly some were paid more quickly than others…. On my first feature, most actors with speaking roles were paid the SAG Ultra Low Budget day rate, regardless of their union affiliation. Paying people to do their job well, to show up on time and to know their lines simply seems like the correct thing to do.

Graham Swon, who appeared on Filmmaker’s 2016 25 New Faces list, is a producer (Fourteen, Notes on an Appearance, Hermia and Helena) and a director. His latest film is The World is Full of Secrets.

1 — I am committed to any production method that allows for artistic freedom. At the time being, for myself and most of the filmmakers I work with, that involves keeping budgets extremely low. It is often the case that there are only two options for how to produce a film: cheaply or not at all. Working with a microbudget is a pragmatic tradeoff to create not just a film, but a film you care about deeply. There are, of course, other freedoms that come with capital, and I certainly wouldn’t be opposed to exploring those tradeoffs.

2 — Distribution is difficult in that there are many, many films and other works competing for the attention of a limited audience. It can be frustrating to put years of labor into a film and have it remain relatively invisible. But, it has also become easier: Between the now-massive film festival circuit and digital means of exhibition, it is possible for a film to be seen globally without a massive sales agent (or, for that matter, any sales agent) behind it. I take comfort in the fact that many of my favorite films were largely unknown in their time; one of the beauties of cinema is that if preserved, the film can exist for discovery at any point. I think altogether too much emphasis is put on immediate response, which is often unkind to strange or idiosyncratic work. I think that independent filmmakers need to be continuously pushing the boundaries of how our films are exhibited; our relative freedom from the economic pressures of larger productions give us freedom to experiment with regard to distribution as well as production.

3 — Communal labor is one of the most beautiful and one of the most expensive elements of filmmaking, and it is essential to pay everyone for their work. On microbudget films, profit participation (outside of, for instance, SAG union requirements) is usually not in the cards, both because the productions lack an adequate long-term apparatus and because the profits are small to nonexistent. Straight, flat-rate pay is usually the reality for most cast and crew. No wages at all and the financially questionable privilege of “rights ownership” is the reward for the producer and director; over years, it is possible to earn a small amount this way and keep the lights on while you work on the next project. Those who are primarily interested in money should probably turn to another profession.

1 — A few years ago, two friends had told me that I would make a good murderer (which I took as a quasi-compliment), and I decided to make a Herzogian, nonfiction-narrative hybrid documentary short where I would ask the people who knew me best about what my most murderous traits were in typical murder settings—I interviewed my mother on the docks and my crime writer friend in the middle of the woods. An interesting result was the realization that the qualities that make a good serial killer are the same ones that make a good director: a sense that you know what you want and that you know how to execute it.

After editing the short, I felt like the piece still wasn’t complete somehow, and I never released it. Instead, I focused on a script I had chosen for my first feature. In the spring of 2018, I was telling my producers about this aborted murder documentary. They encouraged me to go out and work on it while they were raising funds for the other film. We decided on an approach that would integrate the documentary footage into a fictional world where the main character is an exaggerated version of myself and dealing with the same struggles of trying to make her first film. The format informed the budget, and we decided we would make it for as much as we could raise in the short window we had to go and shoot it.

2 — I Blame Society has really been connecting with people who see it, so it’s just been a matter of getting it in front of people. Fortunately, we were lucky enough to attract a great sales agent, and he’s been getting it to good people. Also, Rotterdam was an amazing place to premiere because they don’t have too many American genre films in their competition lineup, and people have been taking notice of that.

I think also in terms of digital distribution, I made sure from the beginning that our shooting format would suit its most likely platforms. We didn’t want to shoot a found-footage movie on an ALEXA—it just seemed disingenuous and not taking advantage of the medium—so, we shot on two older DSLRs, a cell phone, a GoPro and an Amazon security camera. It’s going to look perfect on a laptop or an iPad.

3 — Everybody on the film was paid something. I deferred my writer-director fee, but thanks to SAG I was paid for the acting I did, and I acted every day we shot, so it was like a small salary. In addition, we were able to give points to people who committed a lot of time to the film.