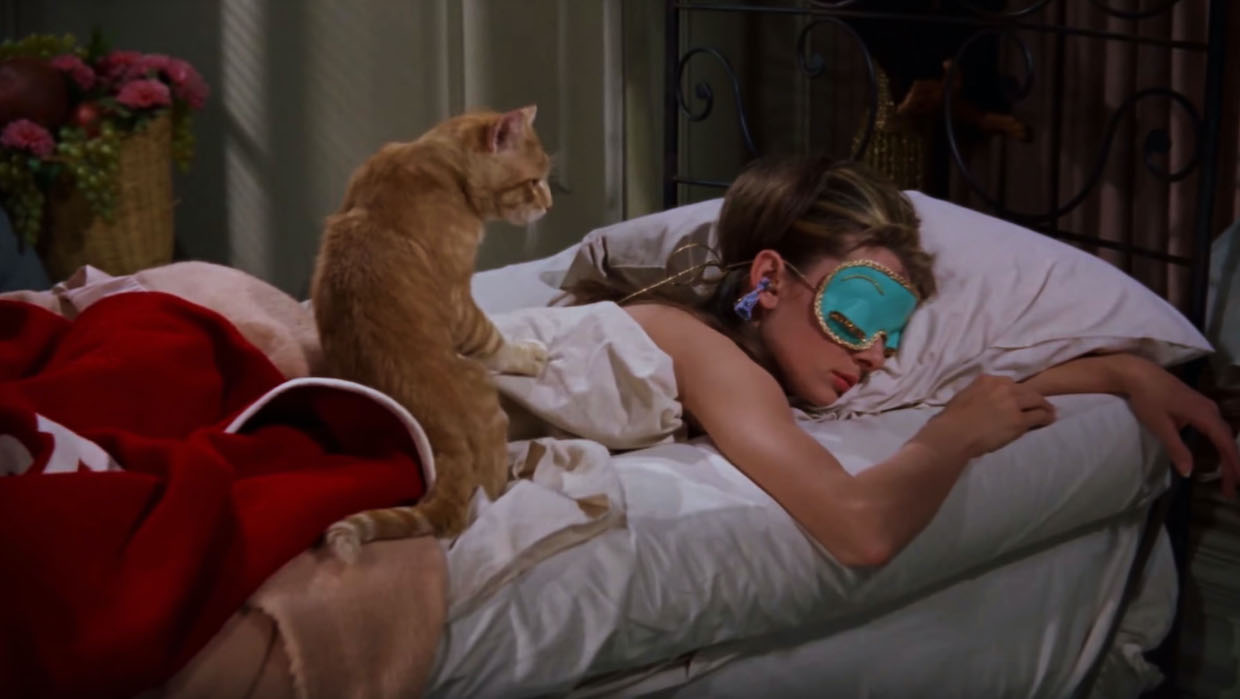 My favorite cat in the cinema is whichever cat I’m currently watching, but my official favorite cat in the cinema is the orange tabby who lives in the sheriff’s office in Jacques Tourneur’s 1955 Western Stranger on Horseback. Part of the cat’s appeal is that the sheriff is played by tough-guy character actor Emile Meyer, and that the filmmakers opt for contrapuntal characterization by having Meyer cuddle the mellow cat in nearly all of his scenes. But the punctum is a shot from inside the office at nighttime, in which the villain’s henchmen force the front door and enter. The orange cat, asleep on a desk in the foreground of the shot, is awakened by the break-in and scurries off camera. For years I believed that the filmmakers took advantage of the lucky accident of the cat falling asleep on the set, thereby creating a small animal documentary within the film. But on second viewing I noticed that a circular camera movement had been organized around the sleeping cat. This was acting.

When I tweeted my admiration for this animal, David Cairns, the formidable blogger at Shadowplay, replied “Could it be an uncredited Orangey? It’s the right period for him.” And so I became acquainted with the legend of Hollywood’s most celebrated cat, the only two-time feline winner of the PATSY (Picture Animal Top Star of the Year) award for animal performers. Orangey was the protege of Frank Inn, the prominent animal trainer whose clientele would later include Benji the dog and Arnold Ziffel, the pig on Green Acres. Orangey started at the top with the title role in 1951’s Rhubarb, a comedy about a cat who inherits a baseball team. Immediately afterwards his PATSY for Rhubarb, he stepped into the role of Minerva in Our Miss Brooks (1952-1956), one of the earliest hit TV series, based on a popular radio show. Animal credits being a casual business, Orangey was frequently billed as Rhubarb, Miranda and a host of other names, and all his extant filmographies are very incomplete. (I could never confirm that the cat in Stranger on Horseback was Orangey.) But he remained a busy cat for many years. After featured roles in The Incredible Shrinking Man (1957) and The Diary of Anne Frank (1959), he nabbed his second PATSY and his best-known role as Holly Golightly’s nameless roommate in Breakfast at Tiffany’s (1961). Orangey continued working hard throughout most of the ’60s, and his last recorded appearances were in 1966 and 1967 as Eartha Kitt’s pet in two episodes of Batman. The record shows a 16-year career, the cat equivalent of the longevity of Lillian Gish or Danielle Darrieux. His date of death has not been noted, but Frank Inn made provisions that Orangey and his other favorite animals be buried with him in a specially constructed coffin with pockets for the animals’ ashes. But Inn lived to a ripe old age, and by the time of his death in 2002 laws had been passed to prevent his wish.

The above filmography suggests that Orangey is the Brando of cats, containing multitudes. One couldn’t easily predict that the chill, Zen-like animal in Stranger on Horseback would turn in a perfectly villainous and rather by-the-numbers performance two years later in The Incredible Shrinking Man. And nothing prepares one for the naturalism of Orangey’s Everycat in Breakfast at Tiffany’s, as focused on the minutiae of survival as the protagonist of Bicycle Thieves. (Orangey benefits here from the direction of Blake Edwards, who characteristically places the cat in droll long-shot compositions that enhance the comic and kinetic aspects of the performance.) Readers who do not know Alex DeCosta’s frame-precise YouTube compilation of Orangey’s scenes in Breakfast should give themselves this pleasure now.

The lives of cats are relegated to human-interest stories. The scraps of Orangey biography that we have, probably originating in publicity releases, are reproduced with such mechanical fidelity that they take on the aura of scripture. He is said to have regularly scratched and hissed at human actors, and some movie executive allegedly called him the world’s meanest cat: it’s hard to believe this calumny of the blissed-out creature in Emile Meyer’s arms. Apparently Orangey’s exceptional on-set discipline did not prevent him from sometimes fleeing the set when the scene was over, and it’s said that Frank Inn would use guard dogs at the studio doors to keep Orangey close to hand.

The student of Orangiana, after having absorbed his or her initial amazement at the cat’s very long career and chameleonic thesping, may nonetheless begin to suspect that Orangey approaches nature’s limit on the multitudes that he may contain. A passage from Sam Wesson’s Fifth Avenue, 5 A.M. about the casting of Breakfast at Tiffany’s sets off an alarm:

The production held an open cat-call at New York’s Hotel Commodore, at which twenty-five orange-furred hopefuls appeared freshly preened and plucked. After an arduous round of auditions and callbacks, the twelve-pound Orangey, belonging to Mr. and Mrs. Albert Murphy of Hollis, Queens, was named the winner. “He’s a real New York type cat,” Inn declared, “just what we want. In no time at all I’m going to make a method, or Lee Strasberg type, cat out of him.”

Inn and Orangey had collaborated on Rhubarb nine years before this casting call. But Mr. and Mrs. Murphy are a convincing detail.

On the one hand, Internet cat lovers want to believe in Orangey’s legend; on the other hand, they know cats. Melissa at the Everything Audrey site, even as she uncritically repeats the Orangey story, states plainly:

We know for fact that the Breakfast at Tiffany’s cat was played by at least two cats: a yellow classic tabby and a yellow mackerel tabby.  These two cats change back and forth throughout the movie.

A quick check of Alex DeCosta’s YouTube video shows the mackerel tabby waking Holly up in his first scene, but the classic tabby, with its marble-swirl patterning, leaping through the air at Holly’s party.

Valley Girl, writing at her blog Teh Kitteh Antidote/Anecdote, devoted much of the first half of 2009 to her fascination with Orangey, but noted at the end of May, “I had spent a lot of time watching Rhubarb in The Comedy of Terrors, and became convinced that this was NOT the same cat as “Cat” in Breakfast at Tiffany’s.”

Valley Girl’s Javert-like pursuit led her to Pauline Bartel’s book Amazing Animal Actors, which cracked the Orangey case with the following unsettling passages about the filming of Rhubarb:

Because cats are difficult to train, Inn was not sure he could teach one cat all of the tricks necessary for the Rhubarb script. Instead, he acquired 60 look-alike cats and used 36 of them for the film. Inn trained each of the 36 cats to perform one or two tricks and used the cats interchangeably in the film. For example, when the director needed a cat to jump, Inn brought out one of the cats that could jump on cue. The cat would perform the trick, Inn would put the cat back in its crate and take out another that could perform the next trick requested by the director.

Inn had various names for the 36 cats with which he worked – Pie Plant (another term for Rhubarb), Big Boy, Long Tail, The ‘Fraidy Cat, Little Britches. However, the official press releases from the studio promoted the story that one cat, Orangey, played the role of Rhubarb.

“So whenever I’d go to the pound, I’d pick up two or three cats that looked alike, struggle through, and try to get the job done,” Inn recalled.

After the shock of Orangey’s non-existence had subsided, I tried to salvage some meaning from the wreckage of the legend. Some of the material — “the world’s meanest cat” — can be chalked up to a publicist’s ancient imposture. But why does Orangey’s career seem to end in 1967, at around the point where a cat’s life span ends? If Orangey was a brand name for any orange cat trained by Inn or his associates (it’s said that many or most of Hollywood’s animal trainers came up under him), then the brand could have continued indefinitely. Did Inn never require the services of an orange cat after 1967? Or did he decide that he’d played the Orangey game as long as it could plausibly be played? And whose ashes were to be buried with Inn? One particular favorite orange cat? A few favorites? A mixture of the ashes of all the cats Inn had ever known? We name and love our pets as a protest against the anonymous extinction of countless forgotten animals. Does the legend of Orangey ultimately lead us back to the nothingness that it was intended to keep at bay?

Frank Inn, whose profession required him to stare continuously into this abyss, seems to have dealt with it as well as any of us can, if his Wikipedia page can be believed:

A true animal lover, Inn could not bear to see healthy animals euthanized, so he took them in. Those with acting ability he and his assistants kept and trained; the others he gave to friends and admirers as pets. Inn said that at one time he and his helpers had one thousand animals under their care, and the feeding bills alone came to $400 per day.

In the spirit of soldiering on, we observe that wherever there’s an orange cat being trained by an inheritor of Inn’s method, Orangey lives, in as true a sense as ever he lived.