With Lynn Chen’s I Will Make You Mine now in release on digital platforms as well as DVD and Blu-ray, Chen and filmmaker Dave Boyle, whose films Surrogate Valentine and Daylight Savings form the first two parts of a loose trilogy in which Chen’s film is the finale, have released a trailer for the complete three-film story. All three films, which premiered, or were set to premiere, at SXSW, feature musician Goh Nakamura, playing himself as he navigates relationships with a trio of  women. Chen plays “Rachel,” who appears in all three films, and in her conclusion to the trilogy, which takes place six years after Daylight Savings, she shifts the viewpoint to the female characters as they interrogate their relationships with Nakamura. 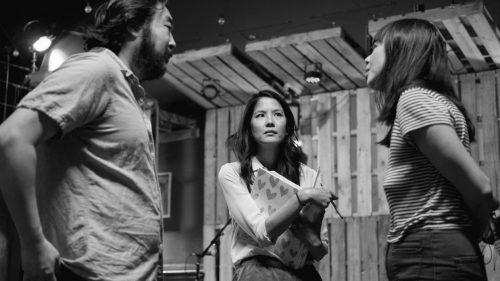 Below, Boyle and Chen sent thoughts and details about their work seeing these films come to screen. In Boyle’s case, he oversaw a remastering process that was complicated by some dead pixels in the original Surrogate Valentine file. For Chen, who suggested the idea of a third film from a female point-of-view, it was mustering the confidence to make her first feature.

Dave Boyle: The tech specs on this series read like a history of digital cinematography 2010-2020. The first one, Surrogate Valentine, was shot on a camera we borrowed from a hunter. It had blood on it when I picked it up. I don’t remember the name of the camera, but it shot HDV to mini-DV cassette tapes and had four dead pixels (I’ll get back to those).

Daylight Savings saw an upgrade to the Sony FS-100, a cool little camera that allowed us to shoot with D.P. Bill Otto’s Nikkor still lenses without one of those ground-glass adaptors that were all the rage for a few years.

When Lynn came up with a plan to finish the series with I Will Make You Mine, Bill Otto suggested we go for a borderline ludicrous visual upgrade and shoot on the Red Helium Monochrome in 8k with Anamorphic lenses. Not your usual DIY camera package, but we made it work thanks to the nice folks at Eastside Camera in LA, and DC Camera in Washington D.C. (they have one of the very few Red monochrome bodies in the country) plus a grant from the school where Bill teaches cinematography, not to mention the heroic efforts of 1st AC Carl Nenzén Lovén, who stepped up and shot the last third of the movie when scheduling issues came up.

Now, about those dead pixels…

Surrogate Valentine debuted on VOD in 2011, spent a little time on Netflix, and then when a contract with a sub-distributor expired, it vanished from the internet. Our attempts to get it back up failed, and then it turned out the original HDCAM tapes we delivered were just… gone. Either the sub-distributor lost them or didn’t want to spend any time looking for them. Who knows!

Our only option was to re-deliver the movie. Luckily, I had backups archived, but QC standards have changed since 2011 and those dead pixels were no longer gonna fly. So I spent a couple of days painting dead pixels out of every shot in the movie. While I was at it, I fixed a few other nagging picture issues and got Carlos Sanches’ awesome 5.1 mix spruced up for the re-release. It’s still the same scrappy little indie it was, with just a little extra spit and polish.

It was a surreal feeling to revisit the movie 10 years later shot-by-shot, but I suppose it’s appropriate given the overall theme of wistful nostalgia this series is all about.

Lynn Chen: It became clear after the first two Surrogate Valentine movies that the third film would have to be told from the female perspective. I’m not sure if I would have had the confidence to do that, had it not been for the #MeToo movement, and the encouragement I received from my mostly Asian-American, female producing team — Mye Hoang, Cathy Shim, and Emily Ting. This film features an almost entirely Asian-American cast, who never talk about their struggles with race or ethnicity, because that’s mostly how I experience life. I hope that it inspires other people of color not only to tell their own stories, but to cast them in a way that reflects their own reality.