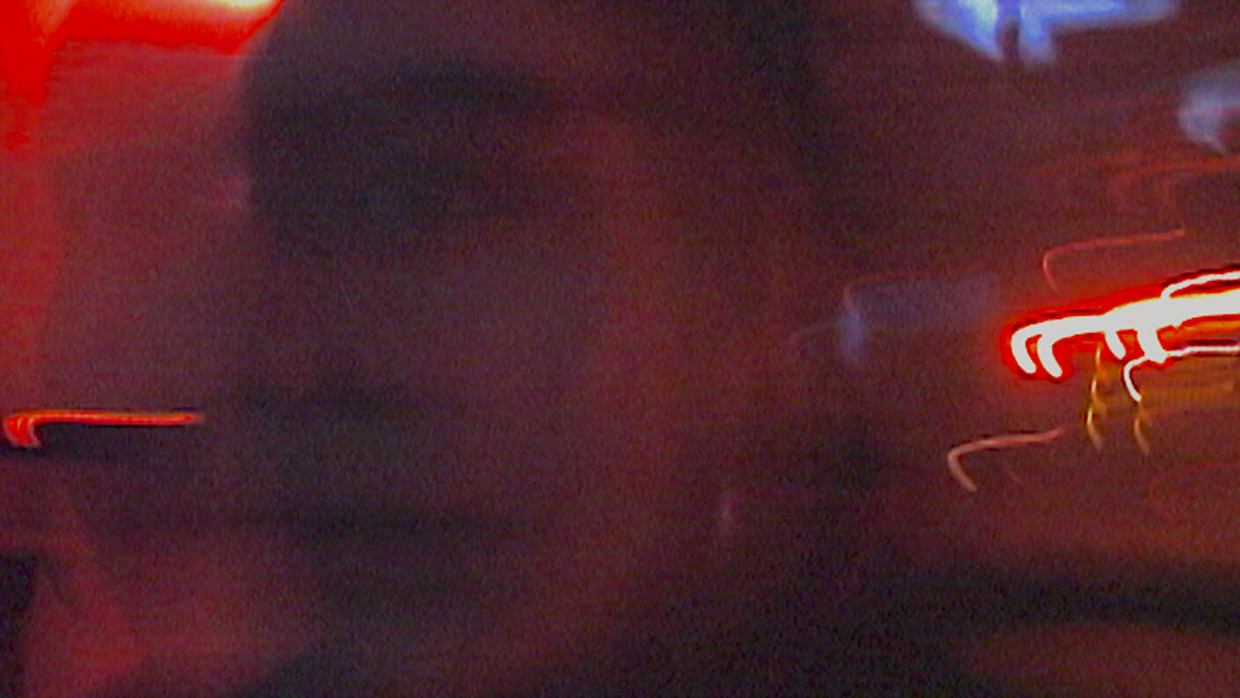 After Visions du Réel, FIDMarseille is the second festival this year I’ve never had a chance to physically attend that I can now at least virtually explore. Compared with VdR’s capacious slate and wide variety of nonfiction approaches, FIDMarseille (now no longer a strictly nonfiction festival) has a reputation for defaulting on the side of formal severity, with zero time for crowd-pleasing softer fare to balance it out. That reputation is in line with what I’ve sampled so far. (Note, too, that there was a physical, in-person edition of FIDMarseille. The United States could never.) I started with Chilean director Carolina Moscoso’s Night Vision (Visión nocturna), a debut feature operating on two reluctantly converging tracks. One is a video diary assembled from footage captured over 15 years with no particular purpose in mind—only the final scene was deliberately shot for this project. The images come from what looks like easily half a dozen cameras, whose resolution and fidelity improve as years go by, a document of an artist with the time and luxury to experiment and find her voice. Shooting as a habitual practice on vacations, at home, in transit et al., Moscoso is repeatedly interested in what happens when technology is left to its own devices (constant auto-focus re-racking can inadvertently yield arresting images) or actively turned against itself (she enjoys putting the camera in nightvision mode, taking it outside during the day and seeing what kind of overexposures result). As a document of a promising young filmmaker figuring out her visual language and interests, this is a strong introduction.

But Night isn’t just a formalist sketchbook: it’s also about Moscoso’s rape years ago. Moscoso does not make a big reveal out of this late in the game; the story is told in the film’s first minutes through title cards layered over, alternately, her images or absolute darkness. The written tone is numbingly factual, describing what happened and the immediate aftermath without overt emotion. After going to the police station to file a report, Moscoso went home for two weeks and couldn’t leave, watching episodes of Sex & the City while imagining she would never leave the house again. That she did, recovered her strength and made a film out of the ordeal is, of course, a testament to her strength, but Night isn’t interested in constructing a primarily emotional narrative about trauma and recovery. Instead, the intricate editorial framework threads this structuring story—the police investigation, initial questioning et al.—around Moscoso’s ongoing visual experiments and refinements, intruding on and reframing them. The analogy with how trauma recurs at uncontrollable moments is deftly handled, with Moscoso moving from shell-shocked silence and written speech to voiceover as she begins to recover. The voice/no voice switch is one of several binaries in this movie, with its irresolvable division between the impulse towards “pure art” and the inevitable acknowledgment of what happened along the way.

Night Vision premiered at Valdivia and won the Grand Prix in the international competition division of FIDMarseille. Another prize-winning feature (of the Georges De Beauregard International Prize) in that slate comes from Argentina and is, to a lesser extent, also concerned with sexual trauma. Tatiana Mazú González’s Shady River examines the mining town of Río Turbio—the film’s Spanish-language title, and the difference between the two titles causes some confusion early on. Reading a slew of onscreen text messages in shaky English about coming to “Shady River,” I wondered if the filmmaker would be heading to a mining town in the States, but it eventually became clear I was looking at translations of Spanish-language texts. I wouldn’t be surprised if there are two versions of this film: the one I saw, and another where the messages are still presented in Spanish. González is also prone to breaking into poetry during these exchanges, a “do people really text like that” decision whose strangeness is heightened by inadvertent linguistic barriers. This level of inadvertent defamiliarization adds an extra frisson to the early stretches.

Gearing up to return home, González lets her aunt know that a family friend seen in a photo from her childhood touched her against her will, and while her aunt’s shaken by this news, she also quickly realizes it fits into a pattern of macho behaviors and expectations conferred upon miners who suffered terrible abuses in the mines and never, ever want to talk about it when they got home. For years, female miners weren’t allowed: the misogynistic cover story (“local legend”) said that the mine was home to a witch jealous of any woman who entered, and that it would collapse every time one did. González takes this weird gendering of the earth a step further, showing a series of startling drawings that render the act of mining as a phallus-enters-earth scenario, with the mine’s tunnels accordingly a series of Fallopian tubes (surely someone in academia got to this analogy years ago, but I wouldn’t know). Ideologically uncompromising (the end credits wrap with shout-outs for the people and against the patriarchy) and with a deliberately unappealing palette (lots of grey fog), Shady River is constructed along the lines of an especially dour ambient album, the musique concrete sounds of mining bleeding into and throughout the score. A regular bass rumble that can only be described as Lynchian (both due to its timbre and relationship to industry) underpins the intricate mix, which often enfolds the sounds of the archival processes necessary to capture photos, old VHS et al. on screen: Xerox machines, the whir of scanners and, most evocatively, the oscillating static generated when a cell phone signal can be heard in the background of a call—a sonic ghost from the pre-smartphone era I’d forgotten all about. I wouldn’t say no if someone wanted to send me a 40-minute .m4a of the film’s audio highlights: it’s a film designed to be heard as much as seen.

Pedro Diógenes’ Pajeú similarly investigates a city’s history from a seemingly limited starting place—in this case, the titular river, specifically the stretch running through the Brazilian city of Fortaleza. Diógenes got my attention within two minutes by briefly seeming to promise a horror movie with an opening daylight nightmare sequence of Maristela (Fatima Muniz) crossing a small bridge over the stream, then stopping and turning her head, her gaze arrested by a freaky-looking creature sitting mid-stream that ever-so-slowly unfolds and starts rising into the air. This is almost the equivalent of placing a bait-and-switch trailer at the beginning of your own movie—the nightmarish vision recurs, but without any additional threats or jump scares ensuing. If it’s a trick, it still immediately snapped me into a film where Maristela (a performer tasked with interacting with nonfiction subjects) effectively goes full Zodiac in trying to get to the bottom of her dream, if only to make it go away: what was that freaky creature, and what ill tidings does it symbolize? This, of course, is not going to be simple or reassuring: learning about the course of the river’s flow, the ways in which the city has been constructed around it and the knowledge gained along the way is all troubling.

In his interview conducted for the festival, Diógenes is blunt about the current political moment: “Brazil is facing a terrible moment with democracy being threatened by a far-right government, which is an enemy of education, of the environment, of the arts, science, indigenous people, women, black people and the poor. We are all in pieces.” That urgency is clear in Pajeú, which unfolds a history of the river being redirected to serve the interests of the rich, that history of economic stratification inevitably tied to colonialism—this is psychogeography directly reckoning with the past. But the movie’s much more fun than that sounds, taking the prompt of learning about the river to go out and talk to a wide mix of intriguing people. Eccentric fun is found along the way, like the man who angrily rants that “all human power is corruption and hypocrisy,” which is why he’s had to place his plants on the other side of the street. There are breaks to go out to the bar and dance, the pleasures of watching inebriated people do karaoke, the occasional unexpected surprise generated by the horror imagery and a sequence reminiscent of The Hottest August (and therefore a lineage going back to Chronicle of a Summer) where Maristela simply goes to the beach to ask people if they’ve heard of the river and what they know about it, if anything. For 73 minutes, Pajeú circles its topic with a restless, lively curiosity whose cheerfulness outweighs the emotional bummer of the bad news that keeps trickling down, and I was praying it would stick the landing. Almost: the final scene is a bit of a cliche choice, but a final dissolve layered on top of it saves the film. This is the kind of pleasant surprise that justifies festival crate-digging.