Visions du Réel 2020 (1): Intimate Distances, On a Clear Day You Can See the Revolution From Here, An Ordinary Country 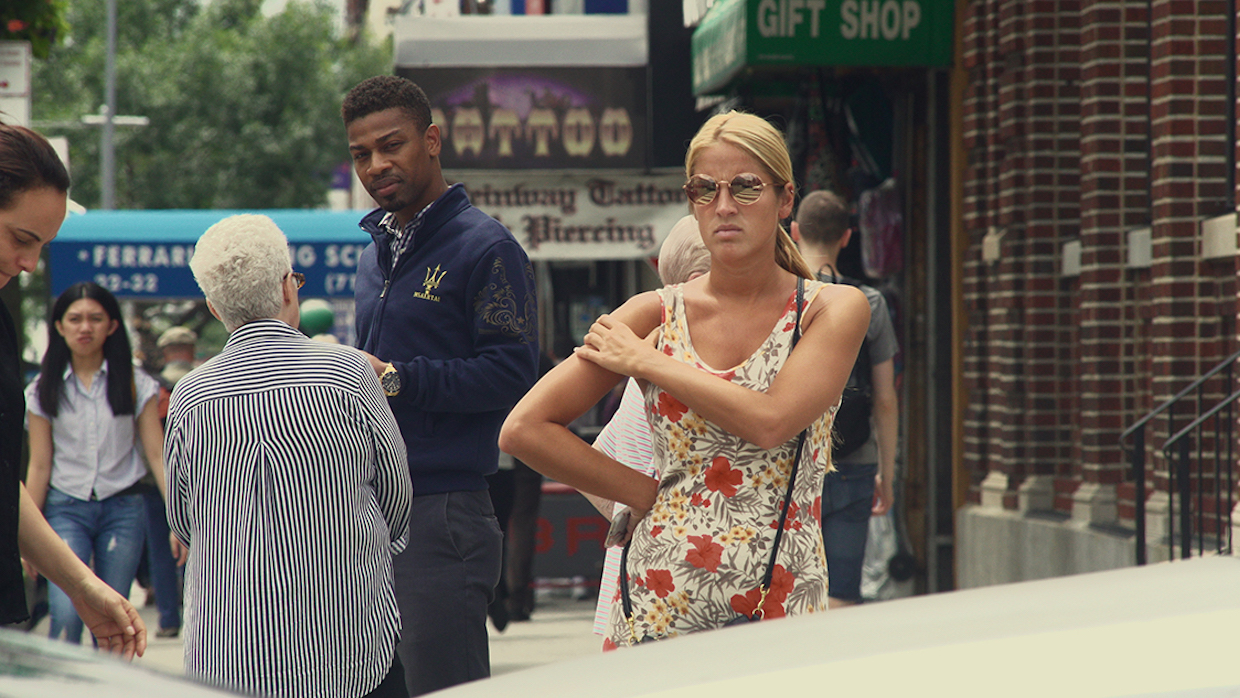 Martha Wollner (back to camera at left) in Intimate Distances

Visions du Réel’s pivot to online-only festival has given me an unexpected new pool of films to sift through. Nearly everything that was supposed to be on the ground at a fest I’d normally never have the resources to attend is accessible online, and the streaming technology is holding up excellently. (AirDropping from laptop to TV, if you have that option, eliminates the watermark, so it’s about as good as online streaming gets.) On the public-facing side (I have no idea how that’s going), the festival went “live” on Saturday the 25th and wraps up on May 2nd. For those with access to the media library, the festival could theoretically last longer than TIFF, as those links remain accessible through the 10th. I’m slowly browsing through what’s on offer, scanning a few minutes here and there; online, no one can see you walk out (unless, of course, perhaps they can on the other side?). That, along with attendant time to fill, encourages more serendipitous chance-taking than usual, as well as allowing me to play the game of “what if I were a programmer?” Here’s what I’ve seen so far, with more to probably come.

Phillip Warnell’s Intimate Distances immediately situates itself at an intersection I know well: Steinway St. and 34th Ave. in Queens, the intersection of the closest M/R train stop to the (indefinitely shuttered) Museum of the Moving Image. DP Jarred Alterman’s camera rests on a roof, slowly zooming in and out of a (now mouthwatering) procession of normal New Yorkers going about their daily business, slowly settling on a short, white-haired white woman leisurely pacing back and forth. Over the next hour, she approaches a clutch of strangers, enquiring with big theater-kid energy if she can ask a few questions. She appears harmless, it would be unacceptable to be flagrantly rude to the elderly and, importantly, most can presumably see a mic on her lapel, so pretty much everyone (who made it to final cut) agrees. She’s a pain in the ass but knows she can get away with it, which helps her go about her work. Basic getting-to-know-you preliminaries (who are you, whereabouts from) build to increasingly specific queries, and anyone who gives promising answers is asked if they’ve ever thought about committing a violent crime. The primary pleasures are both in the unexpectedness of the responses (people are interesting!) and the street scene bustle captured in flattened zoom lens perspective, whose connotations (the telephoto-compressed bustling street-level midtown crowds of Tootsie, the multi-block compressed panoramas of Dirty Harry) are a sweet spot for me.

Though the film’s almost exclusively shot from that rooftop HQ, there are quick, jarringly jittery concealed street shots from hard-to-determine vantage points of the woman: that overhead view is part of a coordinated push keeping unspecifically-intentioned tabs. A voiceover is credited to “Anonymous,” who speaks in a thick British accent heavily distorted to enable said anonymity. He begins talking over a few minutes of black digital leader and returns occasionally, recounting a generic, Hollywood-friendly narrative that could well be true but is still archetypally flattened into a familiar trajectory: tough upbringing, crime, a formative prison stint that left the narrator purer and more of a Hard Man equipped to deal with a relentless world, sincerely grateful for his experience. Between the street-level inserts and the carceral narrative, a surveillance motif is established, theoretically grafting a layer of additional tension onto footage where it didn’t previously exist. The woman, never identified on screen until the credits, is casting director Martha Wollner, and if you know that it’s pretty easy to infer what’s happening: she’s using her tested methods to search for fresh faces for the type described in said voiceover. Whether this is for a real or fake project is kind of irrelevant insofar as producing the desired effects onscreen.”Surveillance” as a concern, both on-screen and post-Patriot Act IRL, is not new, and I’m not positive this additional layer of framing results in a synthesis greater than the sum of its parts.

Not a problem, because I love what’s there: an hour of street repartee, produced via a virtuoso duet between Wollner and Alterman. She walks and trusts her instincts, he likewise makes decisions about whether to follow her or try to catch something interesting elsewhere before syncing back up. The conversations are visually disrupted by the momentary, visually stimulating obstacles posed by turning cars et al., and the results yield Studs Turkel-esque mini-narratives: there is no more unexpectedly heartrending story than that told by a man whose dream, no kidding, is to be a life coach. (It’s not going great.) In a particularly high-wire shot, Alterman leaves Wollner and pursues one pedestrian potential subject after another, panning in multiple directions while sifting through a dozen-ish people passing through a busy intersection. Every person he isolates, however momentarily, seems intensely interesting and like the exact right choice to focus on; when he finds his way back to Wollner at the end of the fluidly sustained single camera movement, I was cheering in my head. (There is the alternate possibility that Alterman lost the thread for a second and had to muddle his way back. Either way, it works!)

Warnell, a multidisciplinary artist whose work I was previously unfamiliar with, wrote a 2009 article also titled “Intimate Distances” with the subtitle “Mediating Mutuality, Contestation and Exchange between Bodies.” The abstract says his work concerns how those factors, in his work, are explored “between the singular and social body, culminating in the exposure of intimate distances.” That all tracks thematically, but I was more intrigued by the supplemental context Warnell submitted to Visions as his “Carte Blanche” video to introduce Distances: a 1985 clip of Jean Genet on the BBC show Arena, asking his interviewer why the crew goes along with all this and doesn’t just revolt. (The sound guy is unamused, saying that though it’s nice to hear any interest in their methods, this normally happens off-camera, not on-, while it’s costing lots of money.) Intimate Distances softens that vision of outright crew revolt into seemingly greater-than-usual autonomy for the DP, collaborating with a subject that has to be confident his gaze is following along.

Emma Charles and Ben Evans James’s On a Clear Day You Can See the Revolution From Here is far less ungainly than its title: 64 trim minutes, inching over the hour mark thanks to a generously prolonged end credits crawl. A loosely structured exploration of Kazakhstan in nicely grainy 16mm, Clear Day starts deep in the rural areas, slowly winding towards urban centers. Rather than a straight country/town dichotomy, the film’s loosely structured in three segments: opening studies of the countryside and its industrial legacy, a bridging review of nuclear power’s role in Kazakhstan’s history, and the third (by far longest) closing section, primarily a study of capital city Nur-Sultan’s disorienting giganticist architecture. In its initial surveys of mines, plants and adjacent areas, Clear Day allows itself to be repeatedly hypnotized by the hum of electrical wires connected to these old Soviet structures, staring at their endless lines while listening in fascination: “David Lynch would enjoy this,” I thought. The sound work is very precise, these ambient tones mutating at considerably attenuated, often imperceptible transitional length into Simon Goff’s score, avoiding the relatively new cliche of a quick transition to extended generic droning. The morbidity factor increases considerably with a visit to the site of the world’s first nuclear test, its history explained by a tour guide and her translator (credited as a no-last-name fellow “Vadim”), both wearing masks. Embedded within this expedition is a truly startling excerpt from cheery Soviet propaganda of the time about how well the explosion and subsequent tests of nearby water went. This visit is capped off by a shot of the crew in full PPEs and masks, followed by a trip to the nuclear history museum.

Differently bracing footage is harvested from Nur-Sultan’s parade of global capital, manifested in structures primarily designed to convey the visually legible sentiment “I was very expensive to build” as directly as anything in Dubai. Gleaming spires invoke the cultural past, topping indoor malls whose expensive facades house a predictable array of present-day retail options. Families lounge on indoor poolside beaches; up above, window washers on extremely elevated platforms clean pyramidal glass panes. The visual approach is implicitly skeptical but unavoidably fascinated, Antonio Gaudi for architecture that’s present-tense rather than being viewed from a temporal distance. I’d never seen these buildings and they’re genuinely fascinating, as if EPCOT turned out to be a workable template for the future after all, with plenty of reflecting surfaces further distorting the already disorienting, intriguing minute changes provoked by/captured in attentive lateral pans.. There’s been a surplus of loosely structured, experimental-leaning travelogues with lightly interpolated mythological/ethnographic elements in recent years; this one’s a pleasant cut above.

Tomasz Wolski’s An Ordinary Country provides opening and closing title card context for its inevitably fascinating assembly of now-declassified surveillance footage of Polish citizens that looks firmly to be firmly from the late ’60s/early ’70s pocket. Otherwise, the footage is unlabeled, with no present-day context provided (or, honestly, needed). Opening test shots of hidden cameras being set up and their sound getting tested in interrogation rooms provide unexpected visual interest in inadvertently disorienting foreground-background relationships dictated by whatever the camera’s placed behind (surveillance apparatus as formal prod to ingenuity). There are snatches of anonymous street surveillance along with some sustained sequences, like the lengthy interrogation of a housewife beginning with her being asked to itemize weekly family grocery expenses (How many sticks of butter? Meat and, if so, what kind? Bacon? Ribs?). A car is trailed, seen for part of the way from the front seat of a warhorse Mercedes (a seeming must for any urban footage from western Europe in that era); in a low-key spy movie moment for real, the pursued vehicle rounds a corner, now picked up from a different camera, and two seemingly parked cars quickly swing out to follow. The most startling extended mission begins with a camera opposite a hotel, zooming in on a man below sporting Civil War-caliber mutton chops. He meets with a woman, they go inside and up to their room and the camera rests outside their window. The spies wait, listening to the bugged room until they’re heard (not seen) to be done having sex. When they’re spotted exiting, the surveillance team walks in, thoroughly toss the premises, then reconstruct its naturally rumpled state from early-format-Polaroids they took upon entering.

It’s unclear to me whether the 52-minute running time is the film’s natural shape or a TV-friendly cut of a work available in a longer cut (I’ve spotted Visions titles offer a TV cut while mentioning a longer one is also available, or vice versa). What’s there is spooky and immersive, Cold War spycraft focused on bullying domestic citizens rather than le Carré-esque internationally-minded bureaucratic tedium with theoretical higher aims. The footage is juiced by some distracting obvious foley imposition of ambience, wheels creaking on roads etc. that clearly doesn’t come from the functional, fuzzy period sound. The distancing, if intentional, is still needlessly distracting, but if the film generally seems interesting to you it almost certainly is.