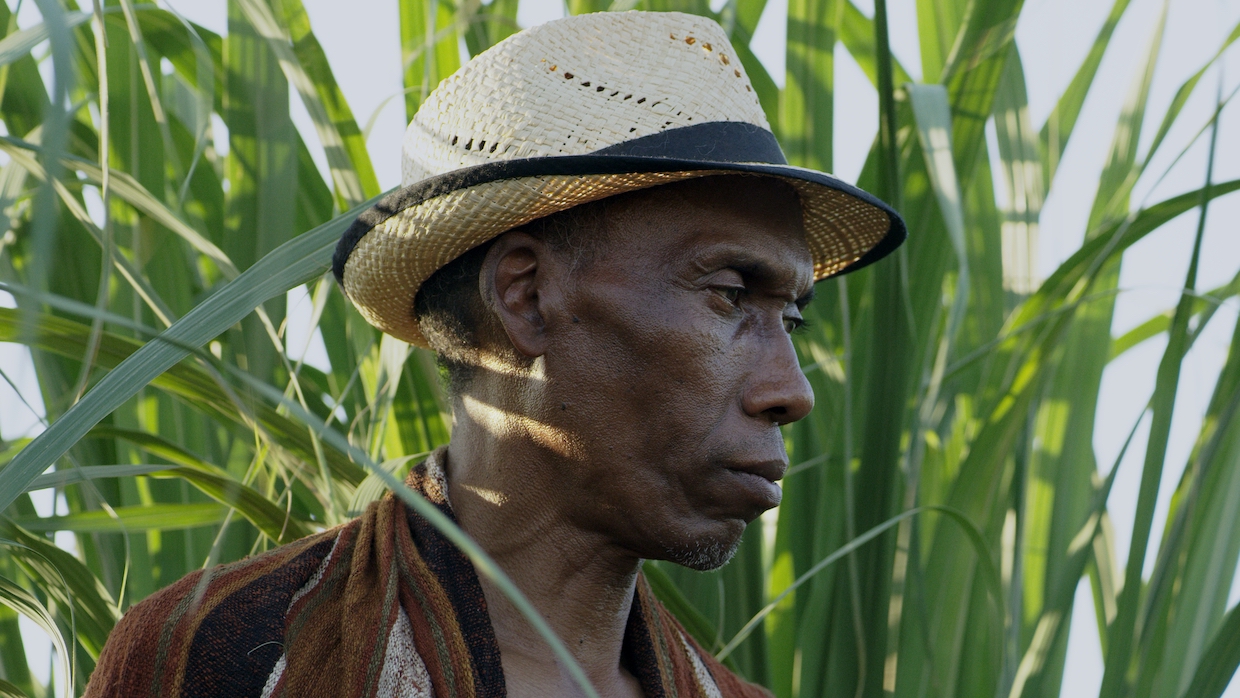 Each FIDMarseille 2020 movie came with a video introduction from the filmmakers, who were given seemingly complete freedom in deciding how, and at what length, to approach this; eschewing the standard-issue speech-to-webcam, Zaho Zay’s had to be the best one. In a living room, a woman (presumably co-director Maéva Ranaïvojaona) paces along to an audio clip from Where Does Your Hidden Smile Lie? of Jean-Marie Straub ranting about the indissolubility of form and ideology. “Form, form, your infamous form,” he snarls, the woman roughly lip-syncing to a rant she seems to have heard and contemplated many times before. This intro is a fairly perfect four-minute short in its own right, encapsulating a certain kind of simultaneously reverential and respectfully bemused response to Straub’s angrily articulated precepts of cinema. (No one feels more comfortable deflating him than his late partner, Danièle Huillet, who waits for the storm to pass before asking “Are you done?”)

Zaho Zay, co-directed with Georg Tiller, is directly concerned with multiple form/ideology divides. One POV split is obvious: Ranaïvojaona is, her bio says, “a French filmmaker with Malagasy origins”; Tiller is Austrian. The film began when Ranaïvojaona and Tiller were scouting for another project in Madagascar (Ranaïvojaona’s first time back since childhood) and were asked to make a short about prison life there for an NGO. Some of the resulting footage was redirected to this hybrid project, a mixture of the clearly documentary, the overtly staged and a fair amount in the messy middle. The story tying it all together is an investigation of the narrator’s long-disappeared father—a murderer played onscreen by Ranaïvojaona’s uncle, his past probed in a voiceover written by French/Malagasy writer Jean-Luc Raharimanana. My initial assumption that this narrator was, on some level, a stand-in for the co-director herself was increasingly undermined: the voiceover veers from theoretically inflected musings and memories to the narrator ID’ing herself as a prison guard and straight-up yelling off (“behind”?) camera at prisoners who stand before her lens in mute tableaus. There is, I figured, zero chance that there was someone just out of frame screaming sexually-inflected hostile threats at them in person, nor is this the kind of director stand-in anyone not on the Dennis Hopper spectrum would want to identify with too much—increasing suspicion of the speaker, and their POV, forms the film’s strongest narrative arc.

The verite footage creates an uneasy spectacle out of the prison yard in two ways: one those tableau shots of prisoners posed against a wall, the other master shots of the whole yard teeming with dozens or hundreds of individuals, a cheaply assembled version of the proverbial “cast of thousands.” There is a certain colonialist perspective inherent to this cold-blooded formalist portrait of an impressive crowd gathering provided cost-free by the carceral state, but the ideological intent is firmly anti-colonial—Ousmane Sembene and Thierno Faty Sow’s 1988 Camp de Thiaroye similarly appropriates the epic’s trappings for a WWII movie that firmly indicts the French. This multiply divided gaze seems, in part, an acknowledgment that Ranaïvojaona is both back “home” and a stranger, and the film finds many ways to widen that implicit gap, increasingly removing the narrator and going freeform hallucinatory as it explores the countryside while effectively dropping its starting point of inquiry.

This is the second film I’ve seen in the last two years that unabashedly steals not just a shot from Uncle Boonmee Who Can Recall His Past Lives, but indeed the same shot (a spectacular overhead view of people inside a cave bathed in sunlight). Here, the visual citation seems like more than a nod to an influential reference point: an acknowledgment that no matter how much effort is made to let Malaguy voices speak for and represent themselves, this film will inevitably map them over outside frames of reference. The form is both well-meaning, aligned with a fairly clearly defined tradition of art cinema, while inevitably creating a greater remove than anyone would want. Many mediocre festival movies can fool viewers into initially thinking they’re up to more than they are via well-composed frames before revealing their basic lack of imagination in finding new uses for slow cinema—Zaho Zay only becomes more interesting as it goes along, shedding the skin of a slightly generic festival hybrid film for something stranger and increasingly itself.

Chloé Galibert-Laîné’s Forensickness also toys with the narrator-vs.-filmmaker divide, establishing itself from the get-go as a sort of companion/response film to Chris Kennedy’s 2017 Watching the Detectives. Kennedy’s silent short gazes at the Reddit boards in the immediate aftermath of the Boston Marathon bombing, with posters trying to flag whodunnit by circling lots of people, often brown, in overhead photos of the crime scene, wondering if there was a pressure cooker in their heavy backpacks, etc.—a real mess and object counter-example to any bromides about “the benefits of crowd-sourcing.” Kennedy’s film is ideally seen on 16mm (his stated reasoning is that the celluloid strips out metadata), but Galibert-Laîné is a specialist in desktop documentaries (frequently working with Kevin B. Lee) that interrogate visual texts. She’s also completing her thesis, a study of “netnographic” films, and hence Kennedy’s short—almost solely composed of images of and from the Reddit boards—is right up her alley. Galibert-Laîné begins by annotating Detectives, breaking down its methods and the ways it works in relation to Kennedy’s other, more overtly structuralist experimental films. Her obsession with Detectives’s methods mirrors that of its subjects—to break down how it works, she ends up chopping it up in Final Cut to see in multi-linear form how much each type of footage is prevalent.

Expanding outwards from the starting text, Galibert-Laîné gets into the meat of the FBI’s marathon investigation and, in a fairly spectacular dunk, compares/contrasts the version of events shown in Peter Berg’s Patriots Day (in which key discoveries are all made by POC and/or women) and the actual federal process as documented in a multi-part ABC special, which was headed and executed entirely by white men. Did the filmmakers think the public would find this unpalatable, she wonders? It’s almost certainly the only time Berg’s work, which tilts heavily right, has been called out for unconvincing gestures towards liberalism. All in all, it’s a busily whirring 40 minutes (four minutes longer than its source material!) of investigative trains of thought, and would have been enough to make for a perfectly satisfying film in the post-Farocki vein. In an attempt to make this more of a “feature,” there is a last-minute reveal about the narration’s provenance that is supposed to change everything and destabilize trust in the speaker. Not actually necessary, it’s an intellectual “surprise twist” that doesn’t meaningfully re-frame anything that became before. But as an exercise in critical examination of government propaganda and internet conspiracy-mongering, it’s a valuable companion to Kennedy’s short, and this diptych seems unfortunately destined to be a key text of the era.