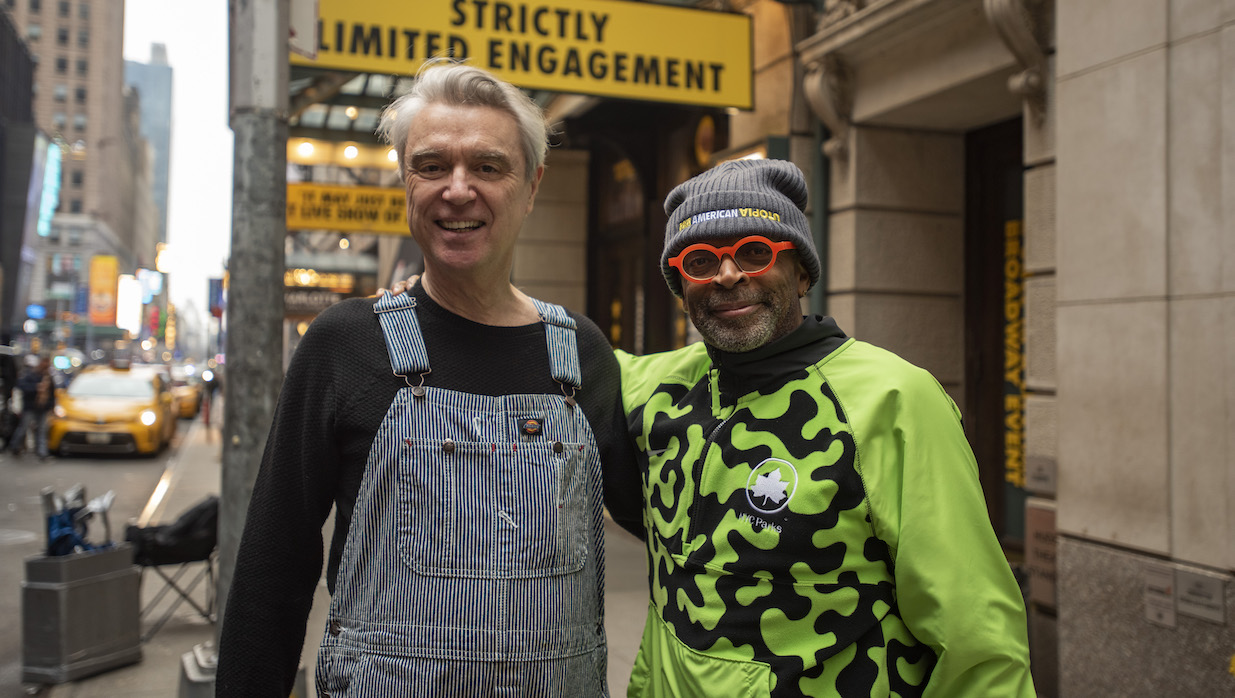 Even without the pandemic, and the attendant pulling of high-market-value films from the festival circuit until it’s over (?), it’s likely Spike Lee’s David Byrne’s American Utopia would have been the opening night film of TIFF 2020. The goal of gala presentations is to sell out expensive seats, and the Q&A combo of Lee and Byrne after a concert movie would have been a surefire bet. A mostly workmanlike rendering of Byrne’s 2019 Broadway show, American Utopia opens with “Here,” one of two songs co-written with Daniel Lopatin from the fairly poky album of the same name—the least familiar selections, five in all, come from that album. They’re not among Byrne’s strongest material (though predictably they improve with a live performance element), but the set fortunately leans heavily on Talking Heads greatest hits (nine out of 21 songs), four songs from his solo or collaborative albums, two of the dance tracks he’s done guest vocals on (I totally forgot X-Press 2, the musicians behind “Lazy,” existed) and a Janelle Monáe cover, on which more in a bit.

Byrne is a veteran of elaborate stage presentations and/or regularly rethinking song arrangements for each tour. This round of arrangements, thankfully for this non-musical lover, have not been Broadway-fied—ten musicians and two dancers (who occasionally pitch in on rhythm) run through a brisk 100-minute set, which Byrne swears onstage is entirely live. (I guess that means the busy brass arrangements on his St. Vincent collaboration “I Should Watch TV” are coming from a sample programmed into the keyboardist’s gear? Good enough.) The musical re-thinkings here aren’t among his most compelling, but Byrne’s always had great backing bands and his best material is indestructible: even a slightly-less-exciting “I Zimbra” is always going to be fun, I found myself tearing up at an early run through “Don’t Worry About the Government” and this version of “Slippery People” is better than the original studio recording and maybe up there with the Stop Making Sense rendition. (Why has mid-aughts highlight “Glass, Concrete & Stone” had its key changed from D- to C-major?) A finale rendition of “Road to Nowhere” begins with Byrne reprising his marching-in-place stage move, a la “The Swamp” in Stop Making Sense, but I suspect that song title’s connotation with the Trump administration will render it unplayable live for the rest of Byrne’s career.

In between songs, Byrne gives a few speeches—all good-intentioned, some cornball. One is about Kurt Schwitters and Hugo Ball; Byrne quotes a few lines from the latter about resisting fascism and gets a nice round of applause. Later on, he urges people to vote, noting that local elections only boast a 20% turnout. “We gotta do better than 20%,” he says, and the crowd cheers (what were they going to do, boo?). The intent in projecting a photo of Colin Kaepernick as the performers, mid-song, kneel and raise their firsts, is well-meaning, but this is basically the kind of exercise in self-congratulatory liberalism that pushes the buttons of easily-outraged Breitbart readers, provokes rapturous applause from an almost universally white audience eager to affirm their liberal bona fides and is likely to make everyone else roll their eyes.

Lee’s approach to the show coverage is mostly solidly unspectacular. He often chooses to disrupt the proscenium presentation for cut-ins that highlight groups of musicians as they rearrange themselves onstage in predictably elaborate choreography—this destroys unity of presentation, but you get the overall idea. Some overhead views of the stage lean lightly Busby Berkeley, but the most recognizably Spike visual element is a repeat of a shot from Red Hook Summer. There, he craned back, up and away from preacher Clarke Peters; here, the camera pulls back from Byrne similarly stretching out his arms mid-song. More active directorial intervention is required for the set’s one cover, of Monáe’s “Hell You Talmbout.” The 2015 protest song, with its chorus of Black names killed by police and repeated call-and-response prompts to viewers to say their names, has already been used by Travis Wilkerson for the climax of his self-interrogating Did You Wonder Who Fired The Gun?, a bracing look at his family’s history of racism. Its use in that very tough-minded live-performance-turned-movie felt earned after Wilkerson’s thorough, self-flagellating examination of white guilt — or, at least, understandable in its reach for catharsis through a voice that deserved more amplification than his own. Byrne has an easier approach to the song, introducing it by saying he’d asked Monáe what she thought about “a white man of a certain age doing the song.” She loved the idea, he says, because “the song is for humanity.” The band launches in, and Lee cuts away to repeated dolly-ins on large photos of those named held by a Black woman. The song is now five years old, so there are sadly/inevitably many more names to add, which Lee duly does with more photos and title cards after the song’s over and the cheering’s stopped.

I would rather people mean well than not, and Byrne’s a legend. Still, as Utopia built to its climax, things couldn’t help but feel a little self-congratulatory: as Byrne and the band take a lap around the orchestra section for a show-closing “Road to Nowhere,” it’s hard not to notice that the audience (the only previous significant audience reaction cutaways are during “Bringing Down the House”) is overwhelmingly white, middle-aged and generally not a rock-show crowd— or maybe it is a rock-show crowd, but one from 1978 that can now pay whatever ungodly price was charged for front-row seats. If you’re a fan, there’s no way some of this set won’t get to you. Still, nobody could possibly come away from this with any political feeling stronger than having their core convictions safely affirmed. One of the very last end credits invites viewers to text “UTOPIA” to a text phone line run by Participant Media, so that they can presumably continue to receive various social media alerts and calls to sign petitions. Whatever form meaningful change is going to take, it’s probably not going to come from that direction.