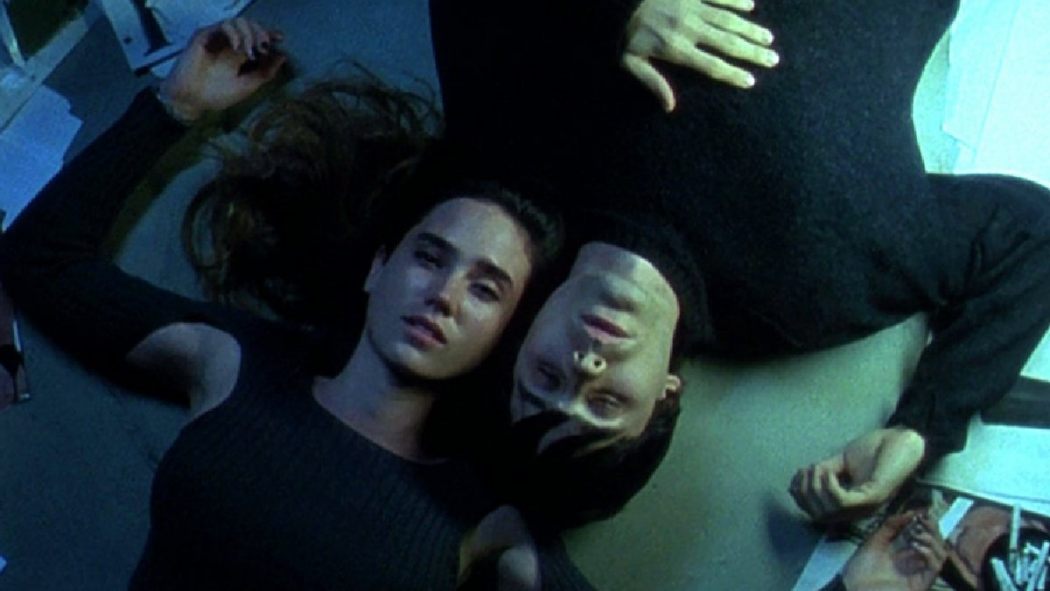 Requiem for a Dream

This month marks the 20th anniversary of the U.S. theatrical release of Requiem for a Dream, Darren Aronofsky’s visually dazzling and emotionally shattering adaptation of Hubert Selby Jr.’s novel about doomed addicts. When it came out in 2000, Requiem for a Dream more than delivered on the promise of Aronofsky’s 1998 debut feature Pi, taking that film’s ambitious experiments with subjective point of view to a whole new level; in Requiem, Aronofksy utilizes split screen, speeded up and slowed down motion, multiple exposures, impressionistic digital and practical special effects, unnatural lighting and clashing color temperatures, extreme focal lengths at either end of the lens, and every other device he can think of to place the viewer in the head space of his tragic protagonists. This is not style over substance, however – to the contrary, the film’s visual and aural pyrotechnics are as precise in their intention as they are stunning in their audacity. When Aronofsky and cinematographer Matty Libatique mount cameras on the actors so that their placement in the frame never changes no matter how frenetically they move, it’s not a gimmick; it’s a perfect representation of the characters’ inability to escape their circumstances and demons. The four lead performances – by Ellen Burstyn, Jared Leto, Jennifer Connelly, and Marlon Wayans – are excruciatingly powerful thanks to the actors’ (and Aronofky and Selby’s) ability to convey the desperate hope that defines each of the characters, whose visions of escape and transcendence are as heartbreaking as they are impossible. Yet Aronofsky presents his elegy for these lost souls not as a sluggish, oppressive melodrama but as a hip-hop-inflected cinematic rocket that flies through its 101 minutes at an unbelievable pace; somehow Requiem for a Dream is both exhilarating and depressing, with Aronofsky’s showmanship deepening the drama rather than compromising it. Lionsgate has released the film in a new 4K/Blu-ray combo pack to celebrate its 20th anniversary, and the disc is exceptional: in addition to a beautiful new transfer supervised by Libatique, the package includes commentary tracks by Libatique and Aronofsky, four new making-of documentaries, and fantastic archival behind the scenes footage showing how some of the picture’s most awe-inspiring effects were achieved.

Jan de Bont’s 1999 haunted house thriller The Haunting is, in many ways, Requiem’s opposite; an expensive studio product engineered to appeal to the widest possible audience, it’s as relentlessly mainstream as Aronofsky’s film is aggressively alienating. What the two films have in common, however, is a distinctive voice behind the camera that permeates every immaculately designed shot and impeccably timed cut – they’re also both, in their very different ways, deeply affecting and effective horror films. De Bont was at the height of his artistic and commercial powers when he took on The Haunting, coming off of the exquisitely directed action classic Speed and the equally well-crafted Twister, a movie that managed to combine the structure and thematic preoccupations of a Howard Hawks ensemble picture with the technology and spectacle of the Spielberg-era blockbuster. Spielberg, in fact, had planned to direct The Haunting himself but traded scripts with de Bont, who was working on Minority Report as a follow-up to Speed 2; the exchange was as fortuitous for both parties as the one Spielberg made earlier with Martin Scorsese when they swapped Schindler’s List and Cape Fear. It’s hard to imagine a Minority Report more haunting and philosophically dense than Spielberg’s, and it’s equally hard to imagine a better director for The Haunting than de Bont, a master of cinematic space who takes the traditional idea of the haunted house as a character and really runs with it – the extravagant, detailed sets by Eugenio Zanetti are marvels of production design as striking as the war room in Dr. Strangelove or “Xanadu” in Citizen Kane. Working from the same Shirley Jackson novel that served as the basis for Robert Wise’s 1963 film and Mike Flanagan’s 2018 Netflix series The Haunting of Hill House, de Bont choreographs one impressively elaborate set piece after another, constantly introducing complicated mathematical filmmaking problems – like shooting a scene in a revolving set filled with mirrors – that he solves in endlessly fascinating and surprising ways. The four lead actors moving through the haunted house – Lili Taylor, Liam Neeson, Catherine Zeta-Jones and Owen Wilson – are all lively and hilarious, and de Bont’s smart (and, in 1999 probably unavoidable) decision to counter Wise’s “less is more” approach to horror with its complete opposite yields a perfectly calibrated piece of rousing escapist entertainment. The film is newly available on Blu-ray as the latest entry in the “Paramount Presents” series, and the special edition disc includes an engaging interview with de Bont as well as an archival making-of documentary.

My final recommendation this week is the outstanding new restoration of Howard Hawks’ Sergeant York, available on Blu-ray from the Warner Archive label. The new 4K master created from nitrate elements is a revelation for Hawks enthusiasts like myself who have grown used to the cloudy look of previous York releases; finally, Sol Polito’s Oscar-nominated black-and-white cinematography is presented in all its clarity, depth and texture. Sergeant York was a rather atypical project for Hawks, a director best known for his modern sense of irony and lack of sentimentality; the patriotic true story of a pacifist who becomes a combat hero during World War I has a lot more in common with Hawks peer John Ford’s sensibility than it does with the tastes of the guy who made Scarface, His Girl Friday, and Rio Bravo. While York is one of the few major Hawks films that the director didn’t initiate and develop himself, it nevertheless proves that he was incapable of phoning his work in – he may have taken the job as a favor to producer Jesse Lasky and pal Gary Cooper (who won an Oscar in the title role), but once behind the camera Hawks infused the story with a deeply felt sense of poetry and purpose. The film’s intensity landed hard with American audiences in 1941 since, as film scholar Jeanine Basinger points out in her excellent audio commentary, the country was essentially going through the same transformation as York, moving from isolationism to involvement in the months leading up to Pearl Harbor. Viewed today, the attitudes and values of Sergeant York feel a little more antiquated than those of Hawks’ more personal works like Bringing Up Baby and Red River, but the tangible sense of physical detail in both the meticulously recreated rural Tennessee portions of the film and in the later combat action sequences is breathtaking, especially in the new and improved transfer. In addition to Basinger’s commentary, the Warner Archive Blu-ray includes a comprehensive making-of documentary and some vintage shorts, including a hilarious Porky Pig cartoon directed by Tex Avery.