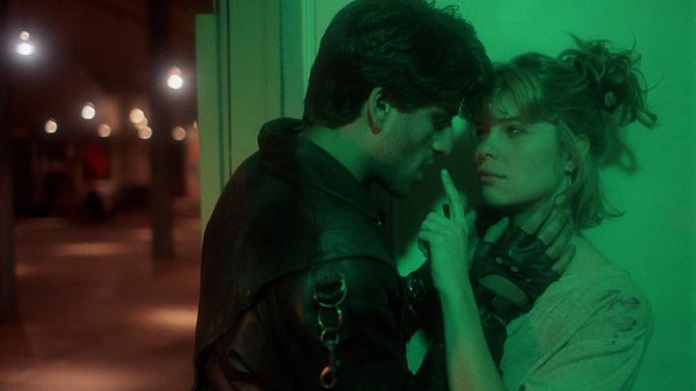 Amos Poe had already directed one homage to Jean-Luc Godard’s Breathless (his 1976 debut feature Unmade Beds) when he began production on the 1984 thriller Alphabet City, but the latter film is the one that really earns the comparisons it invites to Godard and the French New Wave as a whole. A member of the East Village “No Wave” movement of the late ’70s and early ’80s that also included Abel Ferrara, Bette Gordon, Jim Jarmusch and Sara Driver, Poe began his career with the seminal punk rock documentary The Blank Generation, and Alphabet City is a singular mash-up of punk and European art cinema sensibilities, filtered through classic film noir and gangster pictures like Jules Dassin’s Night and the City. Vincent Spano, fresh off of Baby It’s You and Rumble Fish, plays a drug dealer forced to flee the city after he crosses his boss; the movie takes place in one night, in the tightly circumscribed neighborhood of the title, and looks forward to Scorsese’s After Hours in both its expressionistic style and relentless sense of urban claustrophobia and paranoia. The narrative is clean and simple, allowing Poe and his collaborators (most notably cinematographer Oliver Wood and production designer Nord Haggerty) to load it up with visual and anthropological details that make Alphabet City as striking a document of its cultural moment as Breathless was of its time and place. Wood’s work is particularly impressive, a master class in using color and light to express emotion and hypnotize the audience; it’s not surprising that after seeing his photography in Alphabet City Michael Mann hired him for the TV series Miami Vice.

Alphabet City was a ubiquitous VHS title in the video stores of my youth, but in recent years it’s been tough to find. It’s now available on Blu-ray from Fun City Editions, a boutique label devoted to Blu-ray and vinyl pressings of maverick works. Their Alphabet City disc has been lovingly produced, with a great commentary track by Poe and Luc Sante as well as a Vincent Spano interview and a visual essay by Chris O’Neill. It’s one of two excellent new Fun City releases; the other (which also features an O’Neill visual essay and several other great extras) is the American home video premiere of David Greene’s 1970 drama I Start Counting!, a masterpiece of first-person filmmaking and one of the great coming-of-age films of its era. The film stars Jenny Agutter as Wynne, a 14-year old with a crush on her 32-year old stepbrother George and a burgeoning sexual competitiveness with her bold classmate Corinne. Wynne’s intensifying feelings for George and her transition from innocence to sexual awareness coincide with a local serial killer preying on young women, and when Wynne catches George throwing away a bloody sweater she starts to suspect that he might be the criminal everyone is looking for. Adapting a novel by Audrey Erskine Lindop, screenwriter Richard Harris and producer-director Greene plunge the viewer into Wynne’s psyche via subjective camerawork and frames within frames that perfectly convey Wynne’s curiosity and link her voyeurism to the audience’s; we never know more or less than she does, and this combined with Agutter’s sensitive performance makes I Start Counting! a riveting combination of adolescent character study and expertly constructed thriller.

The best supplement on the I Start Counting! disc is a meticulously researched commentary track by film historian Samm Deighan, who’s on a real hot streak lately – she also contributes a fantastic commentary to my third recommendation this week, the Kino Lorber Blu-ray of Captain Newman, M.D. Released in 1963, the movie boasts a powerhouse cast – an unusually loose and warm Gregory Peck, Angie Dickinson, Tony Curtis, Robert Duvall – and has a unique blend of offbeat humor and military drama that paves the way for later satires like Robert Altman’s M*A*S*H and Mike Nichols’ adaptation of Catch-22. Captain Newman, an ensemble dramedy set in a military psychiatric ward during World War II, isn’t as iconoclastic as either of those films, but it’s bold in its own quiet way; the tonal shifts are rather daring, and possibly part of why the movie isn’t more popular – it’s sometimes hard to know what to make of the juxtaposition of broad humor and harsh social realism in this film that’s clearly as much about the Korean and Vietnam wars as it is about the earlier conflict during which it’s set. An even better Vietnam allegory in the form of a World War II picture, Cornel Wilde’s 1967 Beach Red, is also newly available from Kino; the second film in Wilde’s great trilogy of primal action films (following The Naked Prey and preceding No Blade of Grass), it strips the World War II genre of all its clichés in order to rub the audience’s faces in the brutality and stupidity of war with gory relentlessness. It’s Saving Private Ryan without patriotism, without sentiment, and without mercy.