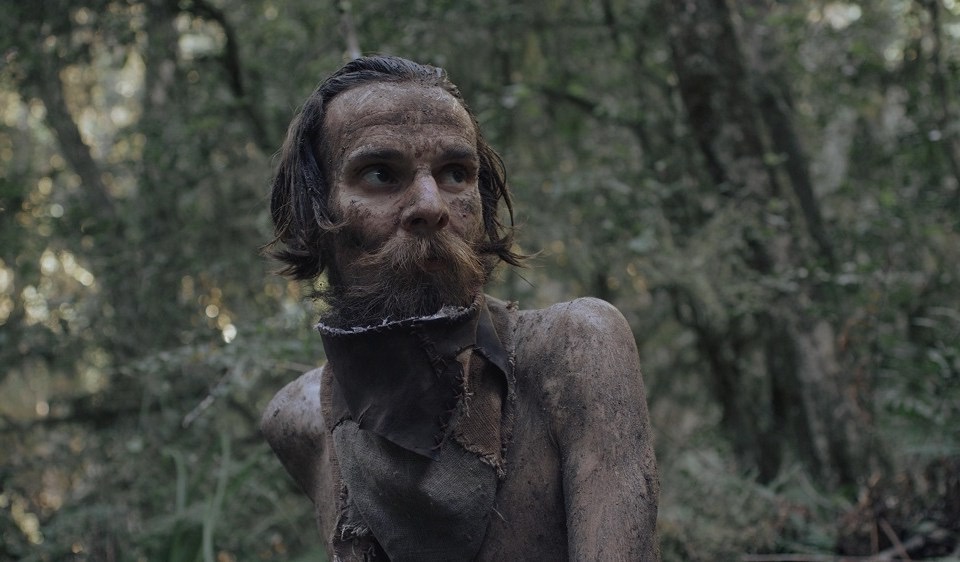 William Burroughs’ explained the title of his 1959 masterpiece Naked Lunch as “a frozen moment when everyone sees what is on the end of every fork.” Director Lee Haven Jones appears to share the Beat novelist’s intention in his feature film debut (after a decade of UK television), The Feast. The Welsh-language shocker serves up a stomach-churning bounty of visceral delights and/or dread in its deliberate 90 minutes, as it builds to a jaw-dropping third act – steadily foreshadowed throughout the preceding course (er, courses) of events. Yet another entry in the resurgence of the folk horror genre, the film was a highlight of the midnight section at last week’s online edition of the South by Southwest film festival.

The set up is executed with chilly satirical incision, an up-the-bourgeoisie approach that’s shared by the films of Luis Bunuel and Ruben Östlund, in which the horror bubbles up from the moral and psychological hubris of a dysfunctional family, the clan of a corrupt Welsh politician who has made a mint turning gorgeous chunks of the countryside into mining sites. Before you can say, “watch out for the sacred burial grounds,” the film intimates that greed will reap a mythic consequence – although this family appears quite capable of imploding without supernatural assistance. The uncanny arrives in the form of Cadi, a young woman who works at a pub in the local village, and who comes to the family’s new home to assist with a celebratory dinner, hosted in an obscene minimalist black cube that has erased the traditional farmhouse. The camera takes Kubrick-ian pleasure in mapping its claustrophobic corridors and blank living spaces, much as the ensemble cast adroitly illustrates a class/caste-defining narcissism as the story slips into a darker and ever more absurd place. Is Cadi, wonderfully underplayed by Annes Elwy, a largely mute vessel for their self-conscious confessions, an avenging angel or merely a bad hire? All of the above? Crisp editing and visual flair heighten the suspense, while the behavioral tics of the characters provoke amusement.

Though it has been labeled as eco-horror, and is set in a jungle (Tsitsikamma National Park) that feels like the South African answer to the DNA-scrambling wilds of Annihilation, Gaia ultimately comes across less a mystical thriller in which people are transformed into screaming sentient mushroom beds – but trust me, there is plenty of that – and more like an eternal coming-of-age tale, one in which the adolescent rite of passage comes with an extra heavy allotment of sexual tension, violence and psychedelic madness. The drama pivots around the triangular dynamic of Gabi (Monique Rockman), a park ranger who has wandered off track to find a downed drone, and a pair of men who turn out to be father (Carel New) and son (Alex van Dyk). Despite their mud-slathered faces, the men aren’t indigenous, but back-to-the-source fanatics who live in rugged isolation in a dilapidated shack where they hold Gabi captive. (Her fellow ranger has gone missing, in more ways than one). The father – part Unabomber, part herbal spiritualist, all survivalist – holds fierce sway over his boy, having raised him alone since the death of his mother. The pair spends much of its time foraging and hunting, and also defending against a small army of mysterious and lethal mutants who have been taken over by a spore rampant in the forest. Gabi’s presence upends the dynamic, as the son’s sexual curiosity fuses with a need for maternal nurturing. As she digs deeper into their secrets, and the threat posed by the spores/mutants becomes more urgent, a decisive moment looms … as do some intense, trippy encounters with forces beyond their control. South African director Jaco Bower keeps a smart focus on the human element without getting tangled up in the more fantastical ramifications, underwriting the film’s ecological message with far more subtlety than you’d expect from a movie overrun with homicidal mushroom people. As Sparks once sang, “Never turn your back on Mother Earth.”

Myth and matriarchy also entwine in the animated The Spine of Night, which sucked in even me, a viewer generally averse to animation, save Looney Tunes and the rotoscoped existentialism of those Rick Linklater excursions. Turns out, Spine is rotoscoped, a collaboration between animator Morgan Galen King and writer Philip Gelatt (Europa Report) that also delivers on a certain quasi-cheesy adventure saga level (some would say it is Game of Thrones-y) of grandiose comic-book dialogue and ominous, written-in-lightning proclamations from figures demonic or heroic. Perfect for kids on Saturday morning. Except for all the blood. There’s a lot of blood. Heads split open, faces melt, and sound effects squish. The heroine is a resurrected swamp-witch (Lucy Lawless) who stomps around pretty much entirely naked the whole time against a backdrop of mass slaughter … and more blood. So: definitely not for kids. But conceived in a way that adult audiences can enjoy it as if they were kids, with a flashback-driven structure of stories-within-stories and an epic battle between good and evil over the magical powers of a blue flower.

Udo Kier, the prolific German actor who turns up anywhere and everywhere – most reliably in the films of Lars von Trier, and to most notable recent effect in the Brazilian thriller Bacurau – gets his own starring vehicle on Swan Song. The sentimental character piece, written and directed by Todd Stephens, is a tribute to a real-life hairdresser in his hometown of Sandusky, Ohio: local legend Pat Pitsenbarger. Kier lives it up, flamboyant to the hilt, in the story of a nursing home resident who escapes captivity for a holy mission. He’s determined to do the hair of a faithful client who has died, a “Republican nightmare” of a trophy wife who once snubbed him when he most needed her. There’s a $25,000 provision in her will if he takes the gig, but the film is all about what happens on the way. It’s a combination of memory play, camp comedy, and reflection on the evolution of gay life in middle America, as Pat is drawn back to the bar where he once headlined as the drag performer “Mister Pat,” only to find his beloved Universal Fruit and Nut Company is closing after one last blowout. The film works as an accumulation of small details and clever asides, all limned in the bittersweet finality of a lifetime and the impertinent glory that Kier going full Udo: holding up traffic as he rolls in an electric wheelchair down the center of a two-lane highways, resplendent in some kind of neon-lime leisure suit. May we all go out in such style.