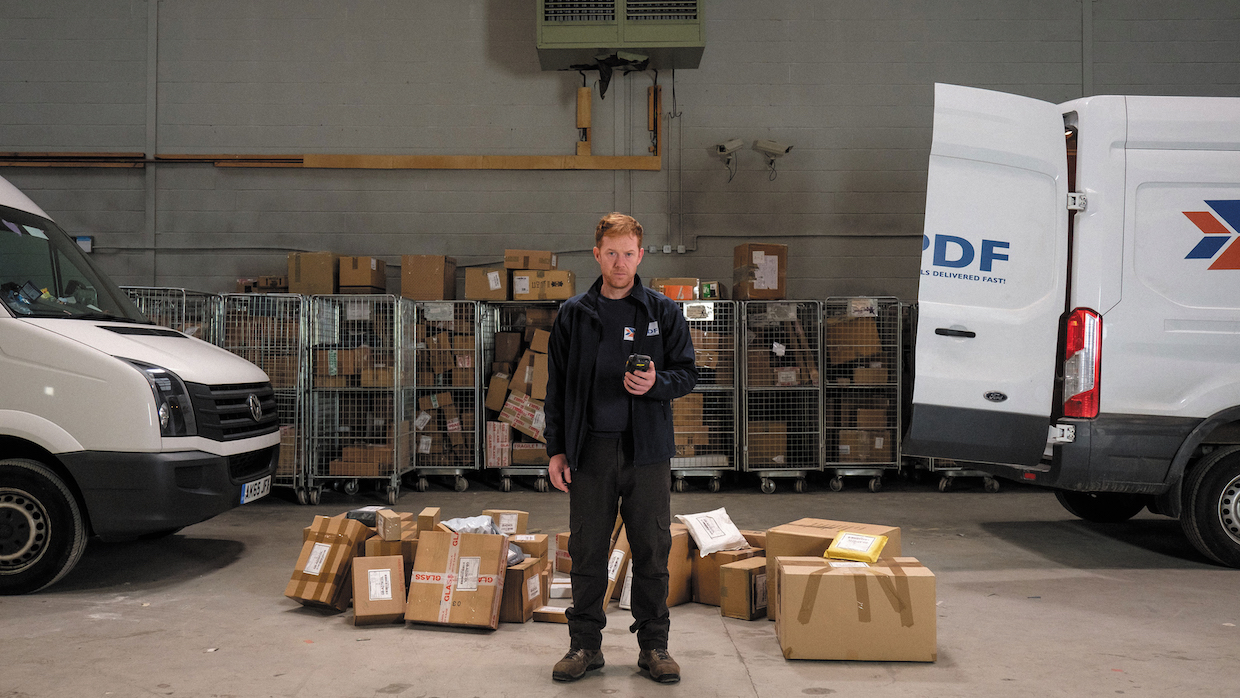 Kris Hitchen in Sorry We Missed You, courtesy of Zeitgeist Films

Amazon, Lapsis, Nomadland, Sorry to Bother You, Sorry to Miss You, Spring 2021

“When you walk into an Amazon fulfillment center, it’s like walking into the Chocolate Factory, and you won a Golden Ticket,” says Janelle, one of the employees featured in videos posted to Amazon’s YouTube page. The introductions share a format, with titles like “Meet Ricardo” and “Meet Ron, military veteran and Amazon Delivery Service Partner.” These documentary-style videos sometimes air as advertisements on streaming services. One of the people interviewed just had a baby. Another narrates in American Sign Language. Janelle talks about providing for her young son. She says he loves packages from “Mommy’s work.” He appears briefly in phone-shot footage, lifting a cumbersome delivery box with joy.

These short videos give an inside look at the warehouses that facilitate the world’s largest online retailer. Sped-up footage of workers on the floor and driving forklifts accompanies Janelle’s narration. Dressed in safety vests, they snake through a maze of pallets, robots and conveyer belts, while boxes slide down spiral chutes. The concrete floors are clean, and the space looks vast and orderly. The workers in the background of the videos don’t look happy, but they don’t look unhappy, either. They just look like people at work.

In “Meet Kent,” another worker talks about his son and his son’s admiration for his job. “Every time he sees the blue Prime trucks,” Kent says, “He says, ’Daddy! There’s your people!’” Whether Janelle and Kent are real people and their commentary unscripted isn’t really the issue. The point of this video collection is to cast doubt on allegations that Amazon warehouse staff are exploited and to bury the reams of reporting that depict the workplace as a living nightmare.

It would be easier on Amazon if its customers imagined all of its operations were conducted by robots. But, as a company with more than a million employees, it’s impossible to hide the existence of the humans on the route from a click on a website to a cardboard box on a front door. This year, plenty of customers, newly working from home, have even had the chance to meet their Amazon delivery drivers. The idea of who might be considered a “tech worker” also has shifted, and a few recent films have explored the change.

In the past, stories about tech companies, like Douglas Coupland’s 1995 novel Microserfs and the HBO program Silicon Valley, which debuted in 2014, have zeroed in on young upstarts working under slightly older tech industry lions. Think of the software developer Ryan Phillippe plays in the 2001 movie, Antitrust, versus Tim Robbins’s Bill Gates-like CEO. Even the cult classic Hackers positions computing as a generational battle: The young punks wish to free digital technology from the corruption and avarice of corporate adults. But in 2021, the lower-level tech insider’s tale has begun to sound predictable. Plus, given the number of stories in recent years about bad behavior by “tech bros,” it’s harder to find a hero in the computer guy who just happens to be a little less senior than the other computer guy.

In contrast with the vulnerable warehouse and gig labor that powers these newly global empires, tech office culture has banausic stakes. As people like Janelle—and the workers in the background—have grown more visible, films have begun to represent their struggles with more honesty than Amazon’s video team would allow. Alex Rivera’s Sleep Dealer (debuting in 2008, years before the “gig economy” had a name) was early to diagnose the problem. His film features workers in Mexico remotely powering robot laborers across the border. A decade later, another brilliant film, Boots Riley’s 2018 Sorry to Bother You, featuring Amazon-like corporation WorryFree, exposes bottom-rung work life, as well as the fig leaves and Potemkin villages that such companies create to deflect media scrutiny. This year, Lapsis, directed by Noah Hutton, cleverly leads with characters in a fictional gig position—part Google Map photographer and Instacart shopper. They face exploitation, but in Amazon-style promotional videos, the CEO declares that sustainability and “doing the right thing” are the company’s ultimate objectives.

Sorry We Missed You, released in 2019, is a direct hit, told as only the director Ken Loach could. The film reveals how the everyday burdens of this line of work can destabilize an entire family. Amazon goes unnamed, but it’s strongly implied when Ricky finds a job delivering boxes of products people ordered off the internet. He’d rather starve than go “on the dole,” and his pride and need makes him an easy mark for the hiring supervisor at the warehouse. “You don’t work for us, you work with us,” he tells Ricky.

The strength of Paul Laverty’s script lies in the scenes set at home. Ricky’s job, the means to provide for his family, has torn them apart. His wife gives up her car so that he can afford a van. Seb, his bright teenage son, skips school and has brushes with the law. Shouting matches between the boy and his father make clear that they want the same thing—for Seb to flourish, for Ricky to have an easier life—but know the deck is stacked, so they take their rage out on each other. When Seb shouts that he doesn’t want to “end up like you” to his dad, Ricky is devastated. I thought of Janelle and Kent when I watched this scene. What they said about their children delighting over boxes and branded trucks feels like a calculated response to those who might have anguished kids like Seb. Amazon has a lot to sell. It’s the “everything store.” What it sells in the video propaganda campaign became clearer to me through Loach’s film: Get a job at Amazon, and your son will be proud of you.

But Janelle has more to say in the video, which was posted online last year. She highlights how people on her team wear masks and have plenty of hand sanitizer. Workers are “going home to babies,” Janelle says, “[and] to grandparents,” and Amazon is trying to keep them safe. Last year, there were regular outbreaks in warehouses across America, and tens of thousands of workers were infected. Alec MacGillis, in his book on Amazon, Fulfillment, published in March, reports that workers relied on rumors about COVID infections because the company refused to inform them when someone was out sick. That’s just last year. Over the company’s history, workers have been injured and have even died on the floors that look so tidy in these videos.

Amazon’s video output coincides with the new style of tech worker movies. In one of the first employee introductions, posted in 2017, “Amazon Area Manager, Day in the Life,” the workers—managers, but on the floor—mention where they went to school (“Virginia Tech with a business management degree”). It is a perfect illustration of the mangled trajectories of tech disruption and social mobility in America: Dropouts can be tech billionaire CEOs, while college graduates end up in Amazon warehouses, and anyway, the opportunities for those without degrees are minimal for everyone besides a privileged class of white people. As Amazon attempts to stage manage its most vulnerable workers, movies like Sorry We Missed You and Lapsis bring the reality of the job in focus.