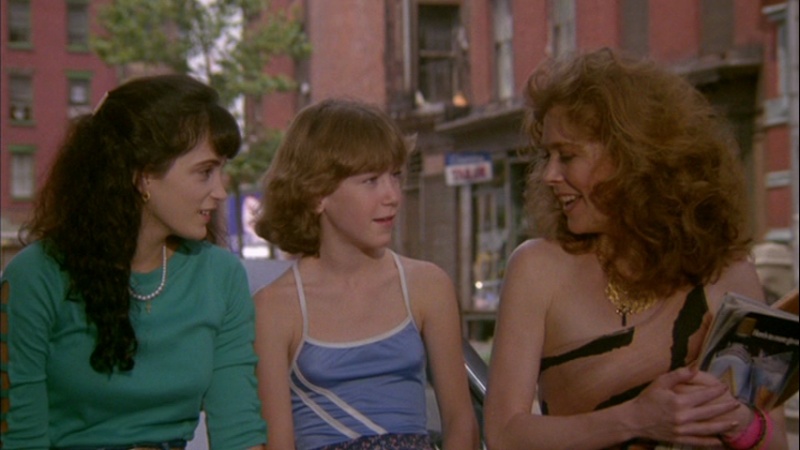 Since the moment 4K discs hit the market, the Star Trek movies have been among sci-fi fans’ most eagerly anticipated titles. This week the first four have finally arrived on the format in the “Star Trek: The Original 4-Movie Collection” set, and I’m happy to say it was worth the wait – the transfers on all four titles, particularly the original, are immaculate. Revisiting them back-to-back, the most interesting thing about the films is how different each one is from the one that came before it; there’s a surprising degree of trial and error as the filmmakers apply varied methods to the problem of finding an enduring cinematic approach to the series. Star Trek: The Motion Picture (1979), which made its way to the screen after a tortuous, years-long development process, has less in common with the Star Trek television series than it does with more poetic and awe-inspiring science fiction films like 2001 and Close Encounters; directed by old school craftsman Robert Wise, it’s big, bold, wondrous and ambitious, and almost entirely missing the stripped-down conflicts and quirky characterizations of the TV show. Paramount’s determination to keep costs down for the sequel, Star Trek II: The Wrath of Khan (1982), brought that picture closer to the more personal and intimate charm of the source material, yet it also works independently of the show thanks to writer-director Nicholas Meyer’s fresh perspective. An outsider to the franchise, Meyer uses the characters of Kirk, Spock, and company as vehicles for a dramedy about aging and mortality that just happens to exist within a rousing action film. Star Trek III: The Search for Spock (1984) and Star Trek IV: The Voyage Home (1986) are both directed by series star Leonard Nimoy, who takes a slightly different tonal approach to each entry: the third installment is a relatively solemn affair in which the heroes spend a good chunk of the movie mourning the loss of various loved ones and dealing with the obsolescence of the Starship Enterprise, while part four – which takes place after Spock’s inevitable resurrection and follows the crew as they time travel to 1980s San Francisco – is almost a straight comedy. As one would expect, the discs include a generous bounty of extra features, the best of which is Meyer’s audio commentary for Wrath of Khan. As candid and self-effacing as it is enlightening and insightful, the track is both an informative production history and a highly utilitarian compendium of writing and directing advice.

Another excellent new boxed set, Arrow Video’s “Vengeance Trails,” packages several Italian Westerns from the cycle’s late ’60s golden age. The best-known filmmaker represented in the Blu-ray collection is Lucio Fulci, whose days as a horror icon were still ahead of him when he directed the gleefully cynical Massacre Time (1966), his first Western and a key transitional film between the light romantic comedies he cut his teeth on and the hallucinatory bloodbaths for which he would become known. Hot off of his iconic role as Django, Franco Nero stars as a prospector summoned home to a town that has fallen under the control of a domineering businessman; he intends to exact retribution and restore order, but Fernando Di Leo’s psychoanalytically inclined script takes the characters and story in some unexpected directions that subvert and reinvent the traditions to which Massacre Time belongs. Maurizio Lucidi’s My Name is Pecos (also 1966) is a slightly more routine oater in terms of its plotting, but cinematographer Franco Villa’s textured lighting and vigorous widescreen compositions give it as much kinetic force as Fulci’s film; an even better 1966 Western, Bandidos, marks the directorial debut of A Fistful of Dollars cinematographer Massimo Dallamano and makes spectacular use of Italian and Spanish locations while putting an idiosyncratic and unpredictable spin on an archetypal revenge tale. The true masterpiece of the “Vengeance Trails” package, however, is Antonio Margheriti’s And God Said to Cain, which is as much a gothic horror and body count movie as it is a Western. Klaus Kinski is uncharacteristically subdued as a wrongly imprisoned man who, when pardoned, heads straight for the men who framed him and kills them off one by one while a tornado approaches the town where the action takes place. The scope is limited – most of the film takes place in one night and one location – but Margheriti milks his limited resources for all they’re worth, drenching the actors in atmosphere and driving the story forward with brutal, relentless force. All four movies are accompanied by supplements that nicely balance scholarly analysis (via interviews and commentaries featuring esteemed scholars like C. Courtney Joyner, Kat Ellinger and Fabio Melelli) with production history and anecdotes told by the personnel both behind and in front of the camera on each film.

Essential supplementary features are also in abundant supply on Criterion’s new Blu-ray release of Andrzej Wajda’s 1958 landmark in Polish cinema, Ashes and Diamonds, which has been given a new restoration that impeccably preserves every detail and nuance of Wajda and cinematographer Jerzy Wojcik’s shimmering black and white imagery and deep-focus compositions. The story of an anti-communist resistance fighter undergoing a crisis of conscience at the end of World War II, Ashes and Diamonds is a masterful example of the intimate expressing the epic, as Wajda, without strain or pretension, uses his modest character study to explore his country’s identity both in the time during which the movie takes place and the time in which it was made. The film is a master class in visual storytelling, with one scene after another in which Wajda takes what could have been routine dialogue and expository scenes and enlivens them with blocking that’s both graphically dynamic and illustrative of the characters’ inner tensions (he’s particularly adroit at using mirrors and other reflective surfaces to expand the physical and emotional boundaries of the frame). Criterion’s Blu-ray contains an array of first-rate extra features that deepen the viewer’s comprehension of Wajda’s techniques, from interviews with Wajda and his assistant director to vintage making-of footage and a commentary and visual essay by scholar Annette Insdorf.

The film and supplements – minus the Insdorf features – are also streaming on The Criterion Channel, which I want to give a quick shout-out to for its exceptionally curated “New York Stories” section. Spanning over a hundred years and 61 films, “New York Stories” consists almost entirely of stone-cold masterpieces, from familiar classics (West Side Story, Do the Right Thing) and cult favorites (Escape From New York, God Told Me To) to underrated gems by major directors (Jane Campion’s In the Cut, Noah Baumbach’s Mr. Jealousy). If I had to pick one picture to single out as a priority for one’s watch list though, it would be Marisa Silver’s 1984 debut Old Enough, a vital work of American independent cinema (it won the Grand Jury Prize at what was then Sundance) and one of the greatest coming of age films ever made. Still in her early 20s when she wrote and directed the picture, Silver was close enough to her protagonists’ ages to get all the details of their lives and behavior exactly right; her story of a friendship between two girls from different socioeconomic backgrounds swiftly moves past the obvious contrasts to delve deeply into how adolescents define themselves in both imitation of and opposition to each other and their families. The movie is jammed with profound ideas and rich characterizations; like Jean Renoir, Silver knows that everyone has their reasons, and she takes the time to respect and explore even characters we think are just going to be one-note jokes, particularly when it comes to the parents. At the time of its release Old Enough was a highly regarded film alongside other indies of that year like Stranger Than Paradise and The Brother from Another Planet, but for some reason it fell by the wayside and has been extraordinarily difficult to see in recent years. Its appearance on the Criterion Channel is thus a cause for celebration – and hopefully a sign that a supplement-laden Blu-ray is to come? Silver seems to have retired from filmmaking to write acclaimed novels like Mary Coin and The Mysteries, and while cinema’s loss is literature’s gain, Old Enough and its 1988 follow-up Permanent Record are so exquisitely crafted and observant that I always hold out hope she’ll step behind the camera again. She’s one of the greats.