“Let’s Look at the Color of Your Emotional Journey…” Director Frida Kempff on Her Immersive Psychological Thriller, Knocking 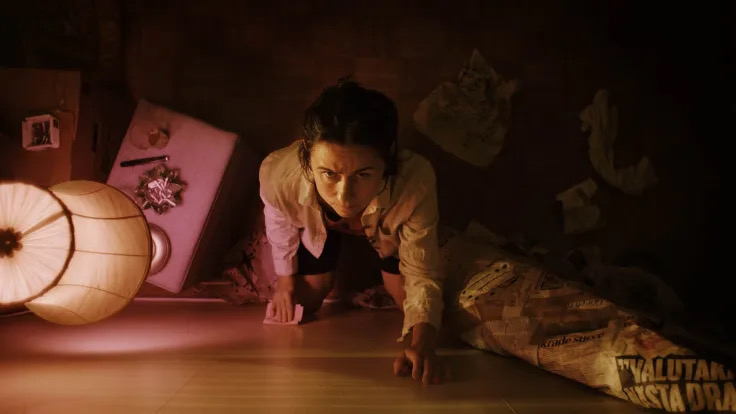 Swedish director Frida Kempff makes an astonishing and bold debut with Knocking, her Sundance-premiering psychological thriller now out in the U.S. on digital platforms. Molly (Cecilia Milocco) has been released from a mental hospital into everyday life, moving into a spartan apartment in an impersonal urban apartment building. But at night, as images of her past trauma flicker through her recovering brain, there’s a knocking sound. What begins as an irritant turns to destabilizing obsession as Molly begins to believe that the sounds originate from a woman help captive and in danger. In an incredible performance, Milocco keeps us both invested in her emotional turmoil as well as questioning it — is she a borderline personality in spiral or, perhaps improbably, onto something more? And in a welcome contrast to many first-time filmmakers who hew to more naturalistic storytelling, Kempff is near-expressionist in her methods here, creating with her collaborators — particularly cinematographer Hans Krantz and sound designer Thomas Jæger — a gripping sensory experience that disturbs while laying the tracks for a final, heart-wrenching twist. I spoke to Kempff via Zoom from Sweden, and we talked about her journey to directing, how she color-coded her notes to both cast and crew, and where the origins of the film might lay.

Filmmaker: I read in another interview that your mother was a child welfare worker and that you have a childhood memory of the phone ringing all the time. And that your interest in this story could have resulted from that.

Kempff: Yeah, exactly. I think one of my idols is my mom because of what she did when I was young. She was so involved with these young girls — she was the only one they could trust, the only one who listened. I remember my father [would say], “Do you have to pick that phone up every night?” “Yes. They only have me.” I think that really inspired me. You know, I thought I was going to save the world with documentaries. I can’t [do that], but I can hopefully do films that maybe start a debate about topics that are happening today. And I think that [the subject of] women and girls is my thing — to tell these stories, and to do that over and over, no matter what genre.

Filmmaker: How old were you during these years? Did your mom share specific stories with you?

Kempff: It started when I was six or seven. I moved out when I was 16 to go to school, but it continued, and my mom was always telling me these stories. She didn’t mention any names, of course, but some of these girls also stayed in our house. Some people say that to work with these kind of cases you have to have a layer of not being too involved, but some people say that you have to [be emotionally invested] — I mean, that it’s your calling. And I think my mother had this calling.

Filmmaker: And these were girls with family issues?

Kempff: Yeah, some were people fleeing from their family, or were coming from other countries and didn’t have anywhere to stay. She was always trying to help them.

Filmmaker: What was it like growing up around these women and their stories? Was it fascinating, or, as a very young child, was it kind of scary knowing about all these threatening forces in the world?

Kempff: It might sound strange, but I had comfort and everything that I wanted in my family, and I was safe. But also through my mom I realized how society looks like or could look like, and I think that helped me to find those stories [as a filmmaker].

Filmmaker: And when, when did film enter your life?

Kempff: Step-by-step I think. I grew up on a farm, and there were no cows in the barn, so I had the whole barn for myself. I began to build up this world in my imagination with my brother and my friends. I’ve always been interested in building worlds. I loved still photography from the start, and then moving images, and then sound came along. I think what I like with filmmaking is the craft itself, what you can do. I’m really interesting in the senses, putting the audience in the character’s shoes and working with all the senses. I’m as much interested in the story as I am in the visuals or the sound or the colors.

Filmmaker: So with this interest in what sounds like staging and the theatrical aspects of filmmaking, was your initial work in documentary more a result of your interest in social work and systems within society, or was it just more practical for you to go into documentary first?

Kempff: I think I was afraid of fiction, I thought working with actors and everything [else] that nothing was “for real.” I was interested documentaries that tell stories about people who haven’t had their stories told. But then I realized I couldn’t really do everything [cinematically] because it is a documentary. It’s like, you have this color palette and you can only use three colors. It’s when I found Knocking that I realized I could work with the story and [make it] how I wanted it to be. I think fiction is what I was meant to be doing. It was just step-by-step. It’s interesting, I did a documentary called Winter Buoy that is very [observational], and I was thinking about how I could put [certain] images in there and stuff like that. But I didn’t want to interfere in any way. And when you look at Knocking, I interfere all the time! So maybe I was trying to build my confidence.

Filmmaker: Knocking is so composed, with a precise color palette and attitude towards the camerawork and sound design. What were the rules or ideas you started with regarding the way you’d tell the story?

Kempff: When I find a good story, I always think a lot about how to tell that story. For me, it’s crucial because if I don’t know [my approach] I can’t start. I need to have my own code when I go in there, I need to find rules and things. I talk a lot with the DP, and then I like to bend the rules. You know, “What happens if we do the opposite?” I really loved the theme of not being believed in Knocking. And that it’s so few locations, and it isn’t a “forward” story — it’s more like going deeper into [Molly’s] inner [world]. And how do you tell that? I liked the challenge. I had this color palette. Something that I found out in the pre-production with Cecilia, the lead, was that instead of talking with words — “more angry” or whatever — we said, “Let’s look at the color of your emotional journey.” So that would be starting with the green, when [Molly] was kind of healthy and okay, to, in the end very red. It was so easy to talk to [Cecilia like that]. Like, “No, wait a minute, you’re still purple.” And it was easy to communicate with every department with these colors too. And because [so much of the movie is within] just these four walls, we did some prerecording so [Cecilia] could react to something. The scene in the bathroom when she climbs up on that hole — that was totally sound designed [in advance].

Because a lot of the story is in her mind, we could do whatever we wanted in the editing. The flashback, that was originally a sequence, a dream that she had. We started to [ask], what happens if we cut fragments of that trauma and they can come whenever, because that’s how memory works? You never know when it will come. That helped [the edit] a lot. Rough cuts are always scary, but the first act of [Knocking’s rough cut] was very difficult because you didn’t know anything about this woman and what she’s gone through. So we added fragments and glimpses of the flashback.

Filmmaker: As a single sequence, where was that flashback originally scripted in the film?

Kempff: Later — I think around the third knocking or something like that. That worked, you know, but the beginning didn’t work because you didn’t know why [Molly] is acting so weird.

Filmmaker: The film portrays someone who is in a state of grief and mourning, but there’s also an element of mental illness going on as well. Or, perhaps, the two of them are interconnected. At the same time, you want to have a character who’s not just a specimen, who is someone that the audience can empathize with as well.

Kempff: Completely. I agree with you. I think that’s why I’m talking again about experience. If you have an experience about this — you may have your relatives or yourself or something that you can [relate to] — you can follow her journey in that sense. It is tricky, and I think everyone who has watched it has had different opinions of what the story is really.

Filmmaker: I’m curious — how have they differed?

Filmmaker: What was the mood on the set like, particularly with Cecilia, since it’s such an intense role and solitary scenario?

Kempff: We shot in 18 days, and I think only three or maybe four of those days she had supporting actors. She’d be like, “Oh, I have someone to talk to today!” It became very tense, and it was a very close relationship [between us]. She isolated a lot, which was something she chose herself. I think it helped her to never be involved with the team and the other actors. I had a room for her that was her space to be — she would work and then go up and just close the door. Sometimes she would come down, and I could feel it was something — you know, she was angry. She would become stressed. And then I’d realize, okay, it’s for the scene. She’s not a diva at all, but that’s they way she prepared. It was like method acting because feeling that pressure helped her to go deeper and deeper — she felt Molly.

Filmmaker: Were there any references for the film in terms of like photographs or art or other films?

Kempff: The DP was very into Darren Aronofsky, and we talked a lot about Black Swan and Requieum for a Dream. I as well think he’s really great [doing] psychological journeys into the mind. And also Polanski, the three films: Rosemary’s Baby, The Tenant and Repulsion. David Lynch, of course, and Hitchcock’s Rear Window. But it’s funny, I never thought of this as a genre movie. It’s an emotional journey into a woman’s life, but it has these elements of horror and thrillers. It was in the editing that I realized, oh, yeah, it is [working in the genre space].

Filmmaker: Did you then lean into that a bit?

Kempff: I think I leaned into a bit, you know, just tweaked some things. It’s good to have the toolbox — you can use it whenever you want, and you don’t have to use it. But I think it’s great to be open-minded and to [follow] your gut.